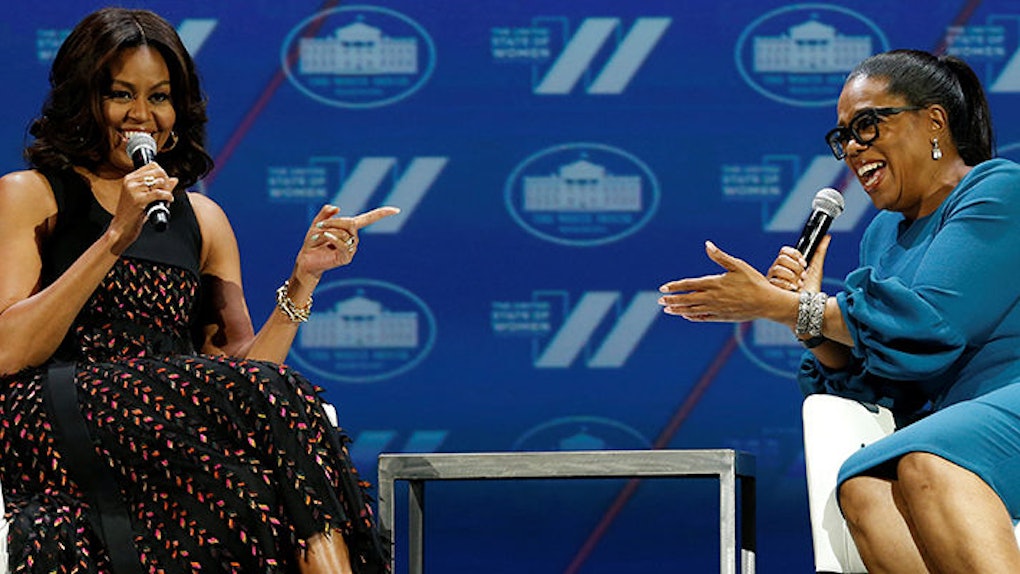 The final one-on-one interview Michelle Obama will take on before leaving the White House will be a sit-down with none another than Oprah Winfrey.

The conversation with the outgoing first lady of the United States — dubbed "First Lady Michelle Obama Says Farewell to the White House — An Oprah Winfrey Special" — will be a television special that will air both on network television, via CBS, and Winfrey's channel, OWN.

Of course, the first lady is no stranger to sitting down with the queen emeritus of daytime television. The two had a public conversation as recently as this past summer when the pair was on stage for the United State of Women summit in July.

There, FLOTUS made headlines for the blunt and straightforward advice to the men in the crowd. Obama said,

Be better. Be better at everything. Be better fathers, good lord. Just being good fathers who love your daughters, and are providing a solid example of what it means to be a good man in the world and showing them what it feels like to be loved. That is the greatest gift that the men in my life gave to me.

Michelle also called on men to be better employers, saying,

When you are sitting at a seat of power, at a table of any kind, and you look around and you just see you — it's just you and a bunch of men around a table, on a golf course making deals, and you allow that to happen, and you're OK with that — be better.

And then there was another conversation between Michelle and Oprah back in 2011, this time with Barack by her side. On that occasion, she discussed how she rated the president's first couple years in office.

This time around, FLOTUS' interview is sure to focus much more on her personal view of her eight years in the White House.

The interview will air on CBS, December 19 and again on OWN, December 21.