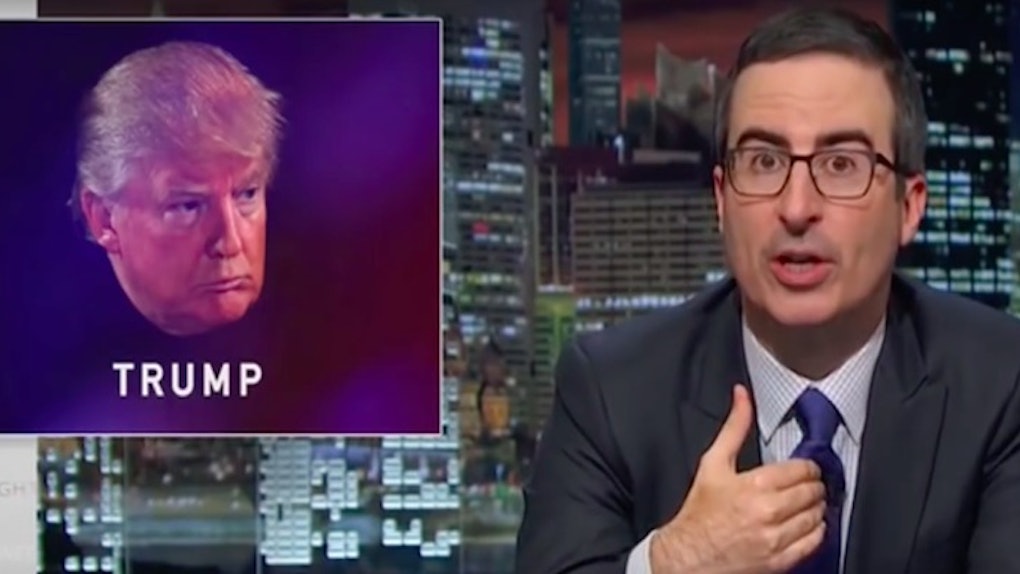 Donald Trump has had a rough couple of weeks. Since the conventions in late July, his poll numbers have nosedived.

This might help explain why we all haven't heard Trump say the word "polls" quite as often as he did during the primary season.

Between attacking a Gold Star family, appearing to suggest Hillary Clinton should be assassinated and calling President Obama the "founder of ISIS," the real estate mogul has really outdone himself this past month.

A lot of people, including prominent Republicans, have not been happy with his behavior.

On top of all this, in the past week, Trump switched campaign managers yet again.

On Sunday, John Oliver highlighted how bad things have been going for Trump, and he offered him a suggestion: drop out.

But hold on, it's not as simple as you might think.

Oliver thinks there's an opportunity for Trump to emerge as a hero in this situation -- if he plays it right.

Simply drop out and tell America this entire candidacy was a stunt, a satire designed to expose the flaws in the system.

From the beginning of the election cycle, whether intentionally or not, Trump has definitely pointed out a number of massive flaws in America's political system, including the overbearing influence of money in politics, the need for campaign finance reform and the media's perpetual focus on controversy, which has essentially granted Trump free airtime.

But, most importantly, Oliver noted,

Perhaps most powerfully of all, Mr. Trump... you didn't just expose the flaws in our political system -- you exposed the flaws in us. Just think about how triumphant it would feel to say on national television, 'I openly ran on a platform of impossibly ignorant proposals steeped in racial bigotry, and nobody stopped me. In fact, you embraced me for it, what the fuck was that about?' That would be one of the most powerful political speeches of all time... If you drop out, in order to teach America a lesson, you would not be a loser -- you would be a legend.

It seems highly unlikely Donald Trump would actually do such a thing. But then again, this presidential election has been full of surprises.

Either way, Oliver definitely makes an intriguing case. Watch the full segment above.