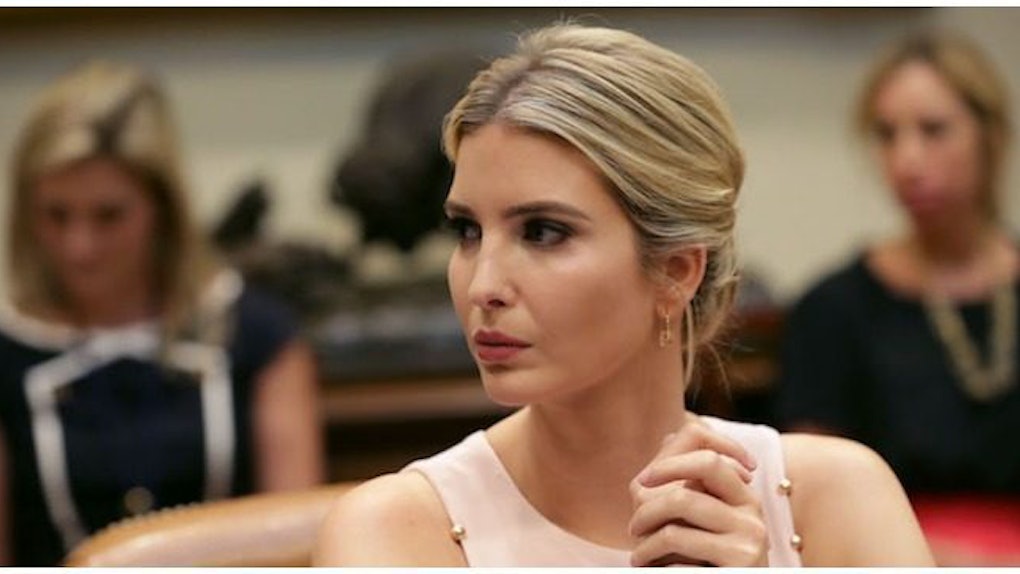 If you choose not to scratch beneath the powdery pink surface, Ivanka Trump's social media presence might appear to be a wonderful collage of feminist thought. Drag your nail just an inch further down though, and you'll realize that all of her vague musings about equality and female empowerment literally represent nothing that our current administration stands for. Ivanka Trump's tweet about women's "untapped labor" released a recent onslaught of trolling, which very accurately poked fun at the irony of it all.

Here are a few things to know about Ivanka Trump, purported champion of workplace issues.

First off, she didn't implement paid maternity leave for her employees at her fashion company until she was literally pushed into it, according to a report from The New York Times.

Marissa Kraxberger, a former employee, told The Times that when she asked about paid leave back in 2013, Trump was a little confused. Kraxberger recounted her boss saying,

Well, we don't have maternity leave policy here; I went back to work one week after having my child, so that's just not something I'm used to.

Right, but also, she is very, very rich and can afford to hire all the help she needs in order to go back to work immediately. But I digress.

After that incident, employees banded together to push for paid leave, and finally one year later, they got it, according to The Times.

Another example of the first daughter's general disinterest in serious workplace issues?

The Guardian spoke to dozens of workers at Trump's fashion label's factory in Subang, Indonesia, and learned that they were allegedly making some of the lowest wages in South Asia. Workers reported that they weren't making enough to support their families (they earn $173 a month), were told to meet impossibly high production goals, and rarely paid overtime wages.

OK, that's really, really bad. Now, shall we look at one more instance of Trump not putting her money where her mouth is? On Aug. 30, the first daughter backed the president's decision to block an Obama-era initiative that would require businesses to collect salary data based on their employees' gender, ethnicity, and race. She released a statement saying,

Ultimately, while I believe the intention was good and agree that pay transparency is important, the proposed policy would not yield the intended results. We look forward to continuing to work with EEOC, OMB, Congress and all relevant stakeholders on robust policies aimed at eliminating the gender wage gap.

During the presidential campaign, Trump campaigned for equal pay on behalf of her father, citing the importance of supporting women in the workforce, and championing the idea of paid maternity leave. So, once again, it is very confusing that when she has the actual opportunity to put her words into actions, she continues to fall short.

Couple that with the fact that Trump has not spoken out against some of the truly inappropriate statements that her father has made about women – and you'll have to forgive me for finding any tweets about women, the workplace and gender equality just completely disingenuous.

And for the most part, Twitter thought so, too.

Here's what happened after Ivanka tweeted about women being the "largest pool of untapped labor."

Some pointed out that it doesn't seem like the administration Trump works for has any interest in equality.

Many pointed out that Ivanka Trump has not exactly been a truly proactive advocate of women's rights.

And even a Donald Trump supporter hopped in there to poke holes in Trump's tweet.

This isn't the first time that Ivanka Trump has come under fire for sending out tone-deaf, completely head-scratching tweets.

When Hurricane Harvey slammed down in Texas this month, Trump took to social media to offer some prayers, and then switched gears to talk about tax reform. Right in the middle of a devastating hurricane.

People on Twitter were really not having that either.

*Sigh.* And that, my friends, is your daily dose of the mind-numbing, disingenuous hypocrisy that is Ivanka Trump's Twitter feed. Thankfully for her, Ted Cruz is now climbing quickly up those ranks. Obligatory shout-out to "Sexuall Posts."