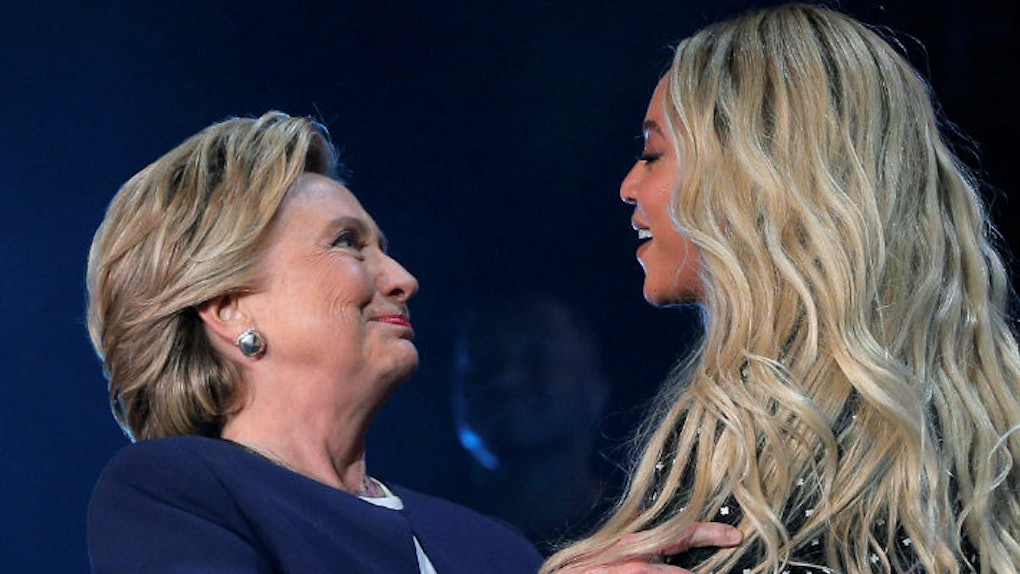 This Picture Confirms Hillary Clinton And Beyoncé Are Besties

I know this election season has been hard on all of us. We've seen families torn apart by political differences, we've seen both candidates dragged through the mud and to be honest, we're pretty exhausted from it all...

But this is important.

After Queen Bey broke our hearts when it was revealed that she and Kim Kardashian weren't really friends, we've done a little soul searching, and we figured it out.

Beyoncé was never friends with the beautiful, cool girl who had a cool boyfriend. They were casual acquaintances, their boyfriends hung out together, and they were part of the Homecoming court together.

(Beyoncé, of course, would be crowned Queen.)

However, she has always been besties with the class president: Hillary Clinton. See photo above for reference.

If you don't think Hillary Clinton and Beyoncé are best friends forever after seeing this picture and watching Beyoncé back her girl on stage in Cleveland tonight, then I don't know what to tell you.

Look at these two having a laugh!

Beyoncé's boy Jay Z claps with them because he knows he'll never understand their level of friendship.

He's probably chuckling along to an inside joke Beyoncé just brought up.

Strong friendships are built on things people have in common.

Not to mention the fact that she hugged Beyoncé on stage FIRST.

While a Trump advisor bitches about the language used in "Lemonade," Clinton was probably like, "Beyoncé, I would BE SO HONORED IF WE GOT TO HANG OUT TONIGHT."

Please look at how proud Bey is of her BEST FRIEND RUNNING FOR PRESIDENT.

Find someone who looks at you the way Beyoncé looks at @HillaryClinton. pic.twitter.com/GtCpgDmCSl — Alex 4 days (@alexandergold) November 5, 2016

Hillary Clinton called Beyoncé an "inspiration," but the feeling is obviously mutual.

Beyoncé said while on stage,

Look how far we've come from having no voice to on the brink of making history again by electing the first woman president.

I want my daughter to grow up seeing a women lead our country and knowing that her possibilities are limitless.