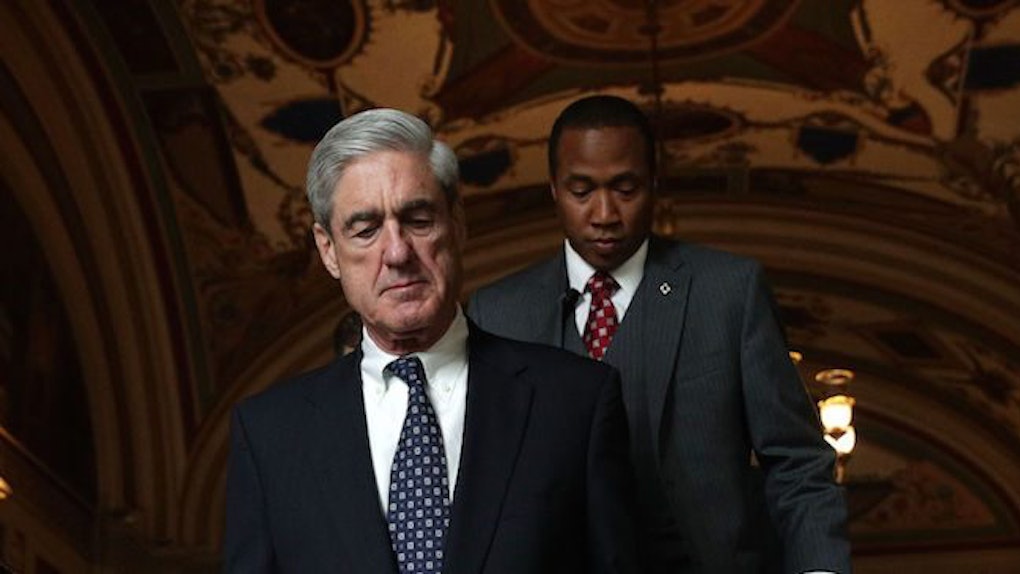 What Does "Impanel A Grand Jury" Mean? Robert Mueller Just Did It With The Trump-Russia Investigation

Donald Trump has just received some very bad news related to the Trump-Russia inquiry. Special counsel Robert Mueller, who was appointed to investigate Russian interference in the U.S. presidential election, has impaneled a grand jury, according to the Wall Street Journal. Essentially: Mueller is putting together a grand jury, which means the investigation is entering a new, more intense phase, and that could spell trouble for the president.

This news comes only one day after Trump signed off on a bill imposing economic sanctions against Russia and limiting his ability to lift said sanctions -- a move which he called unconstitutional and later complained about on Twitter.

Mueller is investigating not only Russia's efforts to interfere in our presidential election, but the Trump campaign's possible collusion with the foreign government. If Trump is found to have been involved in Russian interference, that could lead to an obstruction of justice charge, which could, in turn, lead to his impeachment.

This grand jury doesn't mean a trial is convening, however. Rather, Mueller's newly impaneled grand jury replaces the body that convened before he was assigned to the case, per the WSJ.  This also doesn't mean that the case will be over any time soon. It could drag on for months.

The move signals, instead, that the investigation is heating up, and Mueller most likely "believes he will need to subpoena records and take testimony from witnesses."

The investigation --which Trump has referred to as a "witch hunt" 16 times so far this year -- has been heating up in the past few weeks in light of news that Trump's eldest son, Donald Trump Jr. met with a Russian lawyer who offered him dirt on Hillary Clinton. That news was followed by a Washington Post report that Trump himself dictated the misleading statement Trump Jr. released, claiming the meeting was about adoption.

Mueller's move comes at a serendipitous time in legislative terms, too: Senators Cory Booker, from New Jersey, and Lindsey Graham, from South Carolina, are working on a bipartisan bill that would prevent Trump from firing any special counsel without prior judicial review. This would take away Trump's unilateral firing power, which some have worried he would use to impede the investigation -- much like he was accused of doing when he fired former FBI Director James Comey.