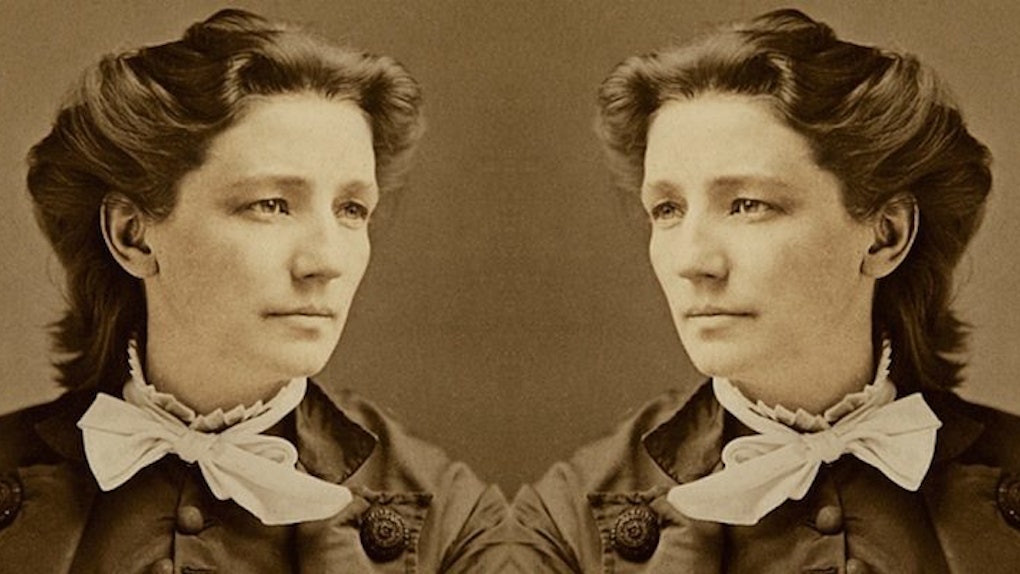 Meet The First Woman Who Ran For President In 1872

At the CNN Democratic debate earlier this month, Hillary Clinton was asked about her position as a political insider.

In response, she said:

Well, I can't think of anything more of an outsider than electing the first woman president.

Clinton and Carly Fiorina have been reminding us they are, in fact, women (though not necessarily feminists), which differentiates them from the other candidates.

Although a woman running for president is so novel it warrants being directly addressed in campaigns, having female presidential candidates is not actually a new concept.

In honor of presidential candidate Hillary Clinton's 68th birthday, we're taking a look back at a woman who came before her -- way before her.

Back in 1872, nearly half a century before women gained the right to vote, Victoria Woodhull ran for president.

Woodhull was a bad bitch who kinda did whatever the hell she wanted despite social restrictions.

She was a female pioneer during a crazy time --  from the construct of marriage to Wall Street.

But I didn’t even know about her until my mother casually mentioned her a few weeks ago.

To quote Drunk History (about Mary Dyer, but the quote’s too good to pass up…):

She changed the world, but you’ll never hear about about it anywhere but here. She’s in an unmarked grave on the Boston Common. And you know whose grave is marked? F*cking Jim Morrison. People fly to Europe to see it, and he wrote horrible music.

Indeed, Woodhull is yet another woman skipped over in history class.

To be fair, Woodhull was something of a polarizing figure. Some of her views, especially on sex and divorce, are perspectives you’d cheer for, but she eventually lost the support of the suffragists.

As NPR highlighted in a 2008 segment on her:

It makes for a very complicated founding narrative for women. You want someone really beyond reproach. You want the George Washington for women and you don't get that with Woodhull. She was a flawed first but she is still the first.

Woodhull married young, molding her opinions on marriage and love.

She was married off when she was 14 to “an alcoholic, a womanizer, a morphine addict and basically a deadbeat,” according to American History USA.

Woodhull had two kids then divorced the bum. Now remember, this was the 19th century. Divorces were not common and women were often harshly judged for it, more so than men.

But she went through with it anyways because, as stated earlier, she was a real bad bitch. Woodhull would go on to get married again and have a good number of relationships.

Woodhull proclaimed women should be able to get out of bad marriages easily and marriage was a patriarchal form of oppression that was holding women down.

Along with her views on the institution of marriage, she preached free love in and out of marriage:

Yes, I am a free lover. I have an inalienable constitutional and natural right to love whom I may, to change that love every day if I please, and neither you nor any law you can frame have any right to interfere.

Woodhull and her sister were business women.

She and her sister, Tennessee, opened their own firm and were the first female stockbrokers on Wall Street, according to History.

The sisters did not come from money. Instead, they found their own ways to get cash.

At a young age, they started working as clairvoyants (speaking to spirits) and alternative healthcare providers -- you know, like selling potions.

This worked out in 1868 when they moved to New York and started working for Cornelius Vanderbilt, who I did learn about in history class and who did not believe in medical doctors.

Rumor has it, Tennessee became Vanderbilt’s lover and he helped fund their brokerage to start it up.

Using the money from the firm, the sisters started their own newspaper, Woodhull & Claflin’s Weekly.

The paper included topics we’re still interested in, like short skirts and vegetarianism. It also published the first English version of Karl Marx’s "Communist Manifesto" in the US, according to Vogue.

Aside from being the first woman in various business ventures, Woodhull was also a political pioneer.

Woodhull got really into the suffrage movement in 1869. And in 1871, she became the first woman to testify on a congressional committee, where she told the House Judiciary Committee women should be able to vote.

Woodhull started her run for president in 1870 under the Equal Rights Party. Her platform included a lot of stuff we still like, according to History:

She campaigned on a platform of women’s suffrage, regulation of monopolies, nationalization of railroads, an eight-hour workday, direct taxation, abolition of the death penalty and welfare for the poor, among other things.

The Equal Rights Party nominated none other than Frederick Douglass to be their vice presidential candidate. Technically, though, Douglass never officially acknowledged the nomination. Regardless, pretty chill choice of running mate.

Woodhull and her sister were in jail on election day.

In their newspaper, Woodhull and her sister called the f*ck out of popular preacher, Henry Ward Beecher.

Beecher went around preaching Woodhull was immoral for her views on marriage and love.

So Woodhull turned around and published that Beecher was a lying, cheating jerkface having an affair with his best friend’s wife.

For that, Woodhull and her sister were arrested for indecency and sending obscene materials through the mail.

They spent election day in jail and were put through a harsh trial, leading Woodhull to eventually leave the United States and live out her life in England.

The sisters lost the support of the suffragists. Susan B. Anthony wrote:

Both sisters are regarded as lewd and indecent.

The suffragists in the 1870s tended to be middle-class to upper-middle-class women. More conventional, more serious, Woodhull was really an outsider. Not well-educated, rather uncouth and some of them just thought she was insane.

Given the time she was living in, speaking as proudly as she did and throwing herself into the presidential race (talk about Leaning In) probably did seem like something only an insane woman would do.

And that’s why I salute Victoria Woodhull, a crazy bitch who went after what she wanted, from the boardroom to the bedroom, without worrying about what she was “supposed” to do.