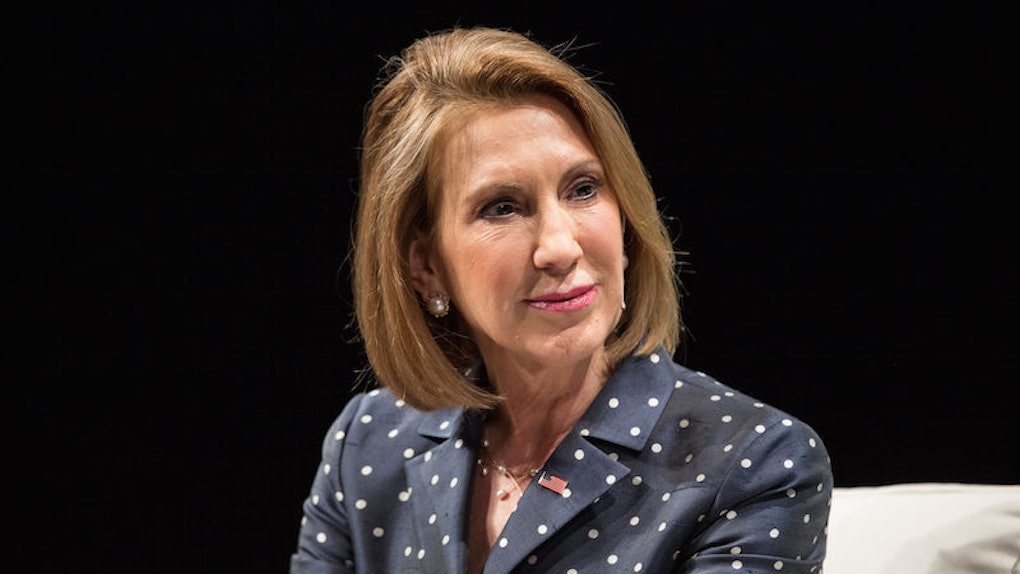 What Carly Fiorina Can Teach Us All About Feminism

When Carly Fiorina stared Donald Trump down as he condescendingly complimented her appearance during the second Republican debate, I shouted, “YAAAAASSS QUEEN!”

But minutes earlier, she horrified me when she made claims about a video filmed in Planned Parenthood which, evidently, does not exist.

As the debate went to commercial, I reminded myself: Fiorina is against abortion, the Lilly Ledbetter Fair Pay Act for equal pay for women, national requirements for paid maternity leave, a nation-wide minimum wage and Obamacare.

Twistedly, Fiorina supports birth control being sold over-the-counter -- but that would remove it from being covered by insurance, thus costing women money.

Fiorina's policies restrict women's rights and opportunities. But since the debate people have been asking: Is Fiorina a feminist?

It helps to go over the definition of “feminist.” In June, Fiorina gave her own definition:

A feminist is a woman who lives the life she chooses.

While Fiorina's definition doesn't include a reference to equality like Chimamanda Ngozi Adichie's famous definition does, it's a pretty solid summary of what feminists stand for.

However, Fiorina's stances don't quite stand up to her definition of feminism. As Donna Brazile wrote:

If a feminist is a woman who lives the life she chooses, then the policies that Carly Fiorina supports make it difficult, if not impossible, for many women -- especially poor and minority women -- to be feminists. Fiorina's opposition to abortion rights, federally mandated paid maternity leave and a higher minimum wage mean that the choices available for millions of women would be severely curtailed. Her part in the crusade to defund Planned Parenthood endangers many women's access to quality affordable health care.

Feminists support equality (and the right of choice) for all women. Fiorina's policies do the opposite of that.

So why are we even having this discussion?

Because Fiorina is a strong, successful woman who is not afraid to stand up for what she believes in.

On the flip side, you don't have to be strong or successful to be a feminist. A quiet woman making minimum wage who fully believes in gender equality is as much a feminist as Sheryl Sandberg.

People continue to debate Fiorina's status as a feminist for two basic reasons.

Second, we have a cultural insistence on policing and labeling women's beliefs in a way we do not have for men. Rebecca J. Rosen pointed this out in the Atlantic:

It's a shame that famous men (not only entertainers, but CEOs and politicians too) are so rarely asked whether they are feminists. Has anyone asked Mark Zuckerberg whether he is a feminist? What about Barack Obama? What about Bill Gates? I cannot find many examples of men in power being asked how they feel about this label.

It's a good point. Why are we so hung up on how Fiorina relates to women and women's rights, but not giving that same focus to the male candidates?

Maybe it's because we almost expect men not to stand up for women's rights while it feels like a betrayal for a woman to do the same.

Regardless of gender, I want a feminist president -- someone who is going to ensure my fair, equal footing to men.

And to find that, I'm not looking at how often a candidate defends her or himself or uses the term “feminist.” I'm looking at the person's policies.