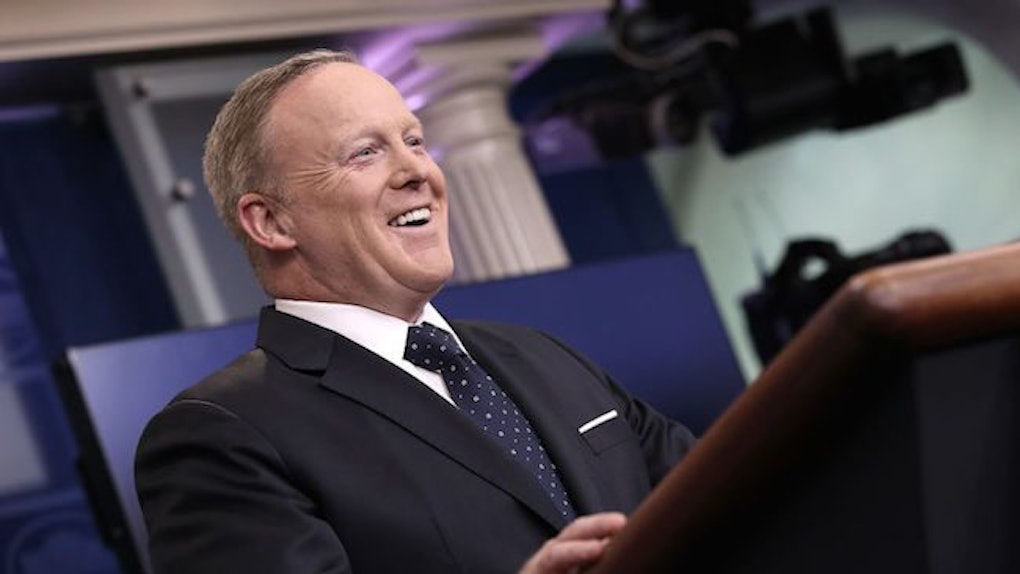 Best Sean Spicer Moments In Honor Of His Resignation

It is an unfortunate truth that, eventually, all amusing things must come to an end. And so, Sean Spicer has resigned as White House press secretary on Friday, July 21.

But although we will miss seeing his face at the White House press room podium, at least we have memories to carry us through.

UPDATE: Anthony Scaramucci has officially been confirmed as White House director of communications. Sarah Huckabee Sanders is now the press secretary, they confirmed during Friday's press briefing. Spicer will be staying on for a few more weeks.

EARLIER: And, oh boy, they are some memorable memories.

In honor of Spicer's resignation, let's take a walk down memory lane at Spicer's most awkward -- and endearing -- moments as press secretary.

At the end of May, President Donald Trump tweeted the word "covfefe." As press secretary, Spicer was tasked with explaining the president's words and actions, which -- regrettably for Spicer -- included answering questions on Trump's tweets.

Spicer did his best to explain "covfefe." I mean, it was clearly just a typo, but Spicer was forced to explain it. So, he said,

The president and a small group of people know exactly what he meant.

And there you have it.

When He Apparently Hid In The Bushes

In early May, The Washington Post reported that Spicer spent some time "hidden in the darkness" near bushes at the White House, trying to avoid members of the press.

This, magnificently, led to the epic meme-ification of Spicer as The Simpsons.

Spicer was not happy with the bushes story, according to Politico, and he said that the Post "grossly misstated the situation around our attempt to brief the press."

This was not so much a funny moment as just a completely bizarre one. In April, while answering questions about Syria, Spicer said Hitler didn't use chemical weapons during World War II.

Essentially Spicer was trying to say that Hitler was not as bad as Syrian President Bashar al-Assad, which, like, bro? Just stop.

Spicer did eventually apologize for trivializing the Holocaust, but it didn't do much to make things better.

Of course, we can't talk about Spicer without talking about Melissa McCarthy's SNL portrayal of Spicer. Her characterization was a loud-mouthed, angry press secretary who would physically move the press room podium to go after podiums.

So, one day in March while answering a question, Spicer quipped,

The press secretary's role is to answer questions. Like, that's the job description.

But one day in early May, Spicer apparently just wasn't into it. So he simply didn't answer any questions. Like, not a one. Watch the video above to hear reporters wail at him to come back -- cries which, I'm sure, are being echoed around the world with his resignation.