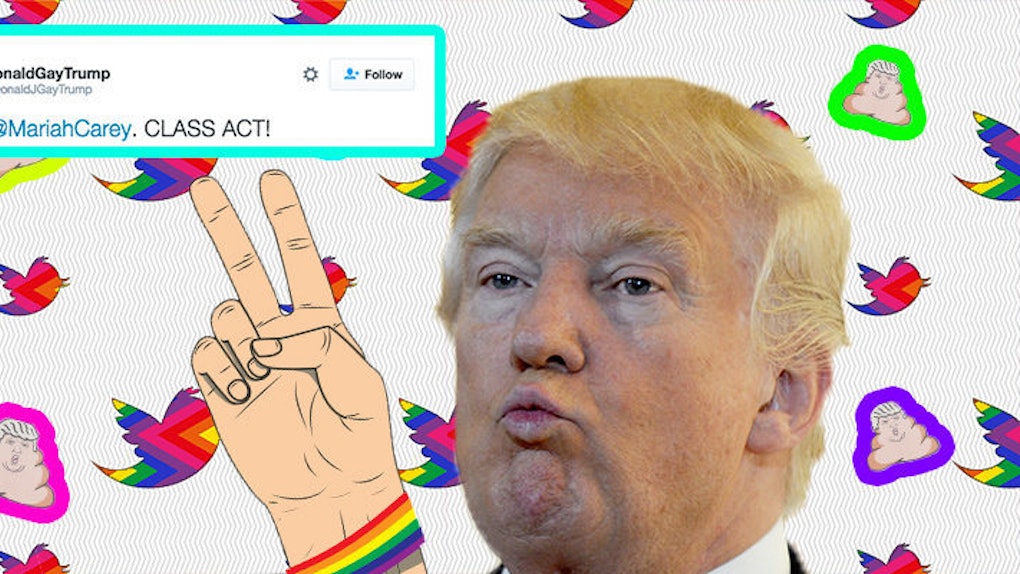 On a recent family vacation, my uncle took me and two of my cousins to breakfast in an effort to gently indoctrinate us into the Trump 2016 flock.

After some brief Hillary Clinton brutalization, he mentioned the liberal media's agenda against her opponent, Donald J. Trump.

“The liberal media is attacking him left and right and letting that crook Hillary off the hook entirely,” he explained as I sat there, shoveling free pancakes into my mouth to avoid mentioning I pay my rent with dirty, liberal, media money.

Between Trump's recent assertion President Barack Obama “was the founder of ISIS” and his comments calling for the “Second Amendment people” to prevent Hillary from getting elected and appointing a new Supreme Court justice, the Republican presidential candidate has become even harder to defend than he was two months ago.

A twitter account founded last month by New York-based comedian Matt Rogers is currently the only likable version of Trump in existence, and this Trump is still a total asshole.

Rogers told Elite Daily he started the account after a friend mentioned the real Donald was likely watching the DNC, cursing every legitimately famous celebrity who made an appearance "instead of at the RNC, championing him."

I started thinking about a world where Donald Trump cared about celebrities and pop culture and tweeted about it with the same insane energy and vitriol that he tweets about everything else. I made a joke about his probable point of view on Katy Perry, and it went on from there.

In case you're wondering, DonaldGayTrump abhors Katy Perry as a human being but respects her work.

Finding a voice for DonaldGayTrump was effortless enough for Rogers, who told Elite Daily,

He makes it very easy to keep making jokes about him, obviously. And it's pretty easy for me to grab the gayest specific you can imagine. I'm a little encyclopedia of gayness.

DGT is not ready to drop his feud with Megyn Kelly, but he's also not blind.

He contributed to the box office success of the “Ghostbusters” reboot.

He's not interested in photo ops with supporters' babies.

He was ultimately unimpressed with “Smash.”

He thinks sexual harassment is for dumb-dumbs.

He's ready to build a wall to keep Orlando Bloom's penis out of the US.

He's on the lookout for that sweet Olympic ass, like a true American hero.

We salute #ARod. He brought HOPE and GLORY to NYC. THANK YOU! Also Kate Hudson told me it's as long and thick as a can of Arizona Iced Tea. — DonaldGayTrump (@DonaldJGayTrump) August 7, 2016

He has zero sympathy for #SuctionCupMan.

Though its creator maintains the account is intended to entertain followers, the similarities between Donald J. Trump and DonaldGayTrump's oratory is jarring when readers consider one of these men has an actual shot at being elected POTUS.

I hope it's drawing some attention to the fact that this person is not an adult, cannot express themselves respectfully and clearly and doesn't deserve our attention and respect. He's a bully and, I really do think, in his own way, he's a terrorist. He's terrifying America into supporting him. So, while this is a lighthearted twitter account, I would hope people clock that the dude's nuts and that's why this even exists.

At this point, Hillary's lucky she's running against the real Donald Trump because nothing unifies a nation behind one candidate like a shared love for the inspirational magic of a live performance of "Fight Song."