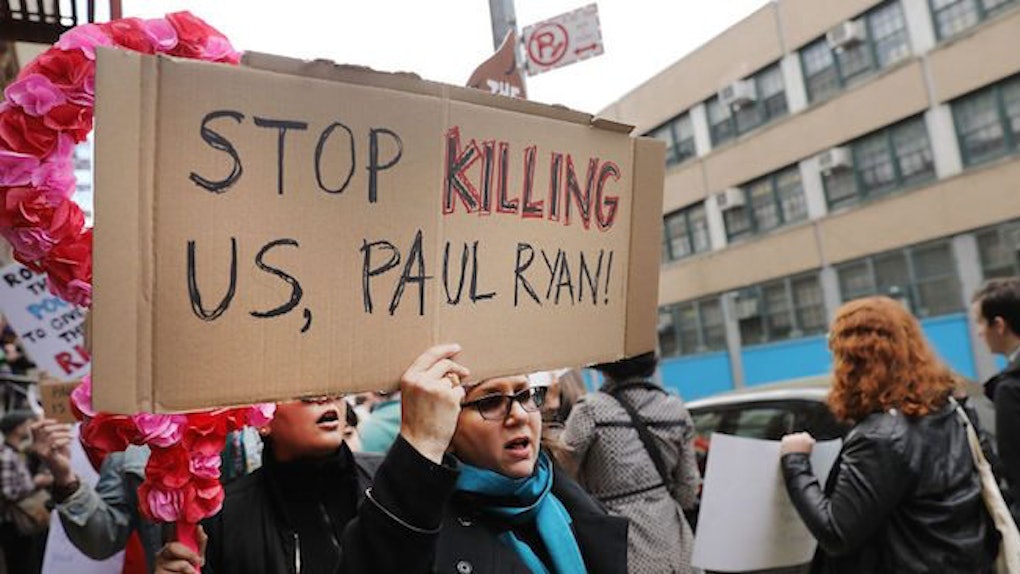 Depression Is My Pre-Existing Condition Under The AHCA

The American Health Care Act, a bill recently passed by the House of Representatives, has a lengthy list of “pre-existing conditions” that could be subject to excessive insurance premiums. This list includes terminal illnesses like cancer, heart disease and diabetes.

But there's another terminal condition that's getting a lot less attention and, if left untreated, can be just as deadly as any of those diseases.

According to the Mayo Clinic,

Depression is a mood disorder that causes a persistent feeling of sadness and loss of interest. It affects how you feel, think and behave and can lead to a variety of emotional and physical problems. You may have trouble doing normal day-to- day activities, and sometimes you may feel as if life isn't worth living.

Depression is also associated with an increase in physical pain, somatic symptoms, and it often goes hand-in-hand with stress and anxiety.

Since I was 10 years old, I've relied on mental health treatment to keep me alive.

I was diagnosed with major depressive disorder as a child, spent several months in psychiatric hospitals as a teen, and I continue to attend regular therapy sessions and psychiatrist visits to maintain my mental health as an adult.

I've had a few periods in my life where I stopped attending therapy and went off my medications. Those periods inevitably ended with an increase in suicidal thoughts, consideration of psychiatric hospitalization for my safety and emergency therapy and psychiatry sessions.

Depression is a difficult condition to explain. I can make a list of all the symptoms, but no words can truly capture the intense feelings of hopelessness and helplessness I feel, the way things that used to matter so much suddenly seem pointless and the persistent thoughts that pop into my mind about how there's no point doing anything because life is horrible, I'm worthless and stupid, and I should just give up and stop trying.

Sometimes depressive episodes last a few days or weeks. Sometimes it can go on for years without a break.

Obamacare made it so that insurers had to accept people with pre-existing conditions and charge them the same premiums as anyone else.

The AHCA lets states decide if they're going to keep that rule or not.

Under the AHCA, if a state takes away those protections, the average premium for people with depression would increase by $8,370. This cost could make treatment unaffordable for many people, including myself. Without treatment, I face a very real and serious risk of increased suicidal thoughts and ideation.

Depression is an illness, a disease like any other. It affects the way my brain functions, and it's not something I can simply stop or control without professional help. Believe me, I've tried.

Suicide rates are already at a 30-year high, which researchers suspect is associated with lower incomes and a worsening economy. Suicide is the 10th leading cause of death in the United States and the second leading cause of death for people between the ages of 15 and 34. For young people, it's beat out only by unintentional injury, and it's the only cause of death linked to a medical condition in the top three.

For millennials struggling to make ends meet in a difficult and unpredictable economy, this type of premium is likely to make treatment for depression and suicidal thoughts completely out of the question.

When people don't have access to adequate mental health treatment, they tend to turn to self-destructive coping mechanisms, so problems like alcohol and drug addiction would likely surge and take their toll as well.

Depression is a treatable, manageable condition that doesn't have to lead to death. Prevention through therapy and psychiatric medication is incredibly effective for most people, and suicide is much more likely to happen when access to that treatment is cut off.

The passage of AHCA makes me fear for my life and the lives of so many people I love.

No one should be denied the health care they need because they're unable to afford it, and those with mental health issues like depression will be the first to fall through the cracks.

Citations: 50 Health Issues That Count as a Pre-existing Condition (Time), What the AHCA's preexisting condition rules could cost you (CBS News)