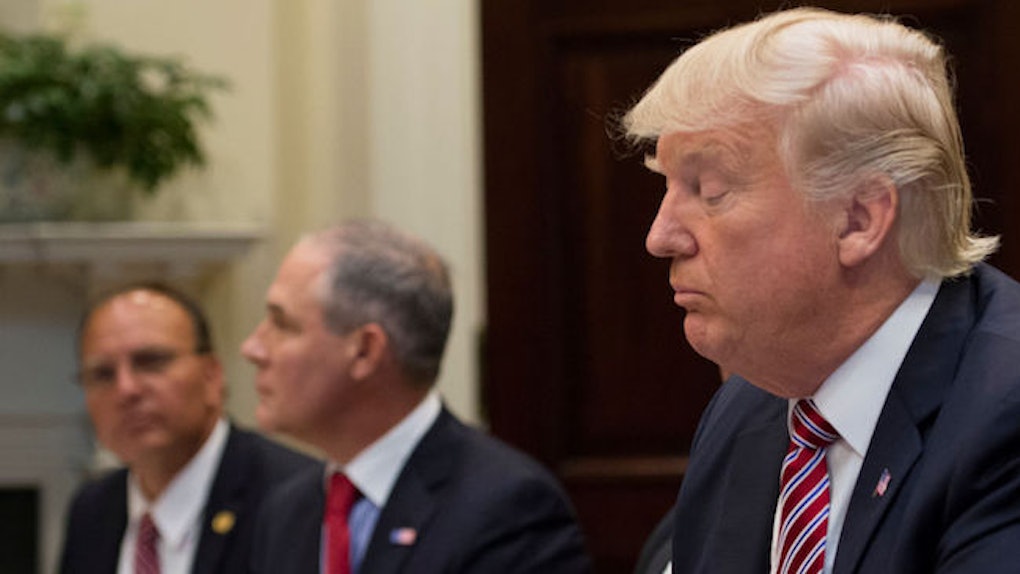 Trump Should Stop Tweeting, According To Most Americans

A majority of Americans want President Donald Trump to stop tweeting, according to a Quinnipiac poll released on Thursday, June 29.

The poll showed 61 percent of American voters think Trump should stop tweeting from his personal Twitter account, while 32 percent said he should continue.

Trump's tweets have been a constant source of controversy.

In 140 characters or less, Trump has caused diplomatic incidents, left pretty much the entire nation deeply confused (covfefe), attacked free press (aka what he refers to as "FAKE NEWS"), decried the judiciary (he's not a fan of checks and balances), and exhibited laser-like misogyny.

So, it's not entirely surprising most Americans would like to see Trump holster his Twitter fingers, as his social media habits are widely viewed as extremely unpresidential (and embarrassing for the nation).

This was especially true on Thursday, June 29, after Trump attacked the appearance of MSNBC host Mika Brzezinski on Twitter.

Even some Republicans joined in to denounce what Trump said about Brzezinski, and when members of the GOP speak out against the mistreatment of women you know it has to be bad.

After all, this is the party that consistently attacks women's health/reproductive rights and continued to support a presidential candidate even after he was caught on tape bragging about what amounts to sexual assault.

But I digress. Let's return to Trump and the fact most Americans seem to view him as a national disgrace...

According to the poll, 52 percent of voters believe Trump is abusing the powers of his office, while 46 percent say that he isn't.

Relatedly, the poll showed most Americans (54 percent) think Trump's controversial dismissal of FBI Director James Comey was an effort to disrupt the investigation into the Trump campaign's alleged collusion with Russian interference in the 2016 U.S. presidential election.

At the same time, a majority of Americans (63 percent) think Trump is a "strong person," according to the poll, and most also said they believe he's intelligent (58 percent).

But, in general, it's arguably not unfair to say most in the U.S. believe Trump's presidency is basically a perpetual dumpster fire.

Trump remains highly unpopular (this is not FAKE NEWS).

The president's approval rating is at 40 percent, with 55 percent disapproving of the job he's doing, according to the Quinnipiac poll.

Trump doesn't fair much better in other recent polls, either.