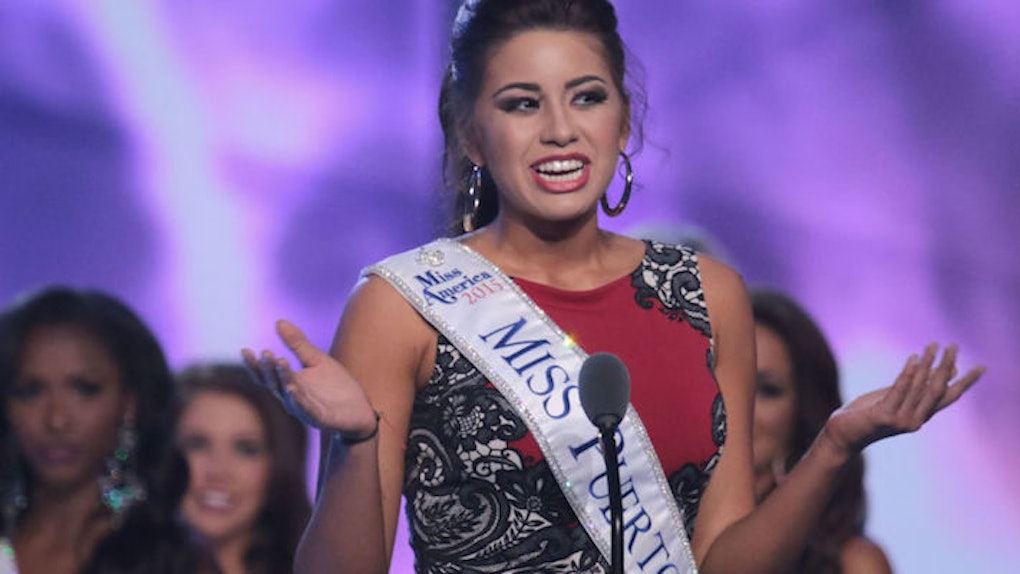 The pageant community is one undercover Sandra Bullock away from experiencing an unparalleled scandal trifecta.

As though the massive mix-up during last night's Miss Universe broadcast wasn't enough, Miss Puerto Rico 2015 took to Twitter to fire off some hateful, poorly researched allegations about Muslims.

In response to Michael Moore's #WeAreAllMuslim campaign, Destiny Vélez tweeted at the filmmaker Thursday, reportedly claiming “all [Muslims] do is build their mosques… terrorize innocent Americans and plant gas stations.”

In a series of since-deleted tweets chronicled by the Latin Times, Vélez suggested,

There's NO comparison between Jews, Christians & Muslims. Jews nor Christians have terrorizing agendas in their sacred books.

Setting aside momentarily the fact the entire Old Testament of the Bible is a veritable buffet of violence and brutality, Vélez's gross generalizations and lack of information regarding the religion of Islam make her appear Islamophobic.

The beauty queen insisted she is not hateful as she is not religious.

I don't believe in religion so can't be #Islamaphobic.

Oh, OK, noted. The 20-year-old crafted around 10 tweets on the topic. According to Huffington Post, she also said,

If we are all the same then Muslims need to take off their napkins off of their heads cuz I feel offended by it.

Vélez then reportedly vowed, in a tweet to Donald Trump, to vote for the Republican candidate who recently recommended the US government prevent Muslims from entering the country.

The Miss Puerto Rico Scholarship Organization suspended Vélez indefinitely for her actions. Vélez issued an apology in a statement via the organization.

In the statement, Vélez said,

I now fully expect Sandy Bulls to show up at the next major pageant and tackle the crown off the winner.