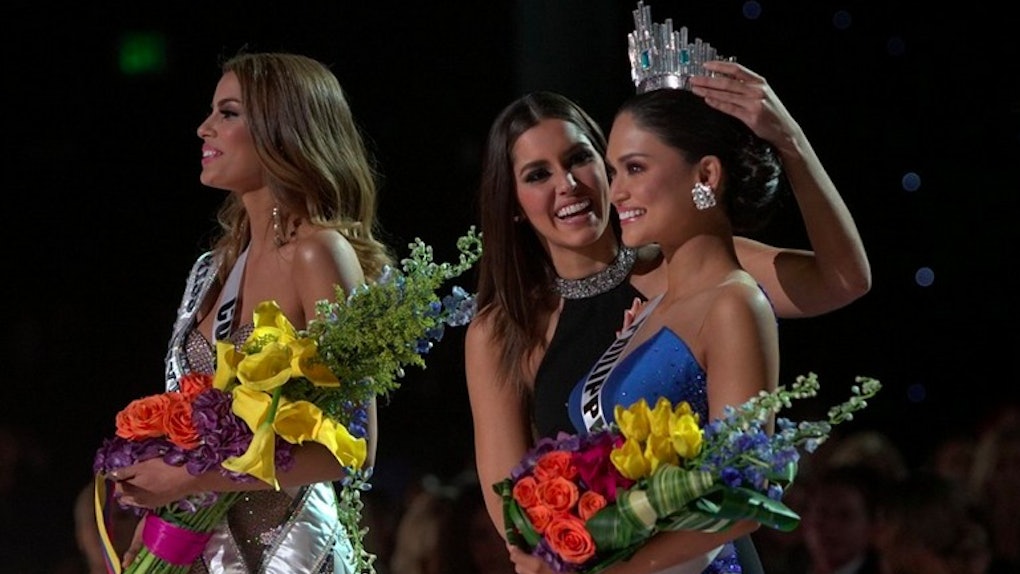 You had one job, Steve.

The Miss Universe pageant culminated in one incredibly uncomfortable finale Sunday night, after the show's host and crusher of dreams Steve Harvey royally f*cked up and announced the wrong winner.

I'd like to apologize wholeheartedly to Miss Colombia & Miss Philippines for my huge mistake. I feel terrible. — Steve Harvey (@IAmSteveHarvey) December 21, 2015

Whether you were watching live or have ever seen "Miss Congeniality," you know the moment. Two beauties in sparkling gowns holding hands anxiously on stage. One envelope. One crown.

Only, the thing is, she isn't.

Literally nothing more awkward has ever happened on live TV.

As Miss Colombia Ariadna Gutierrez Arevalo soaked in the moment she had likely been waiting for her entire life, feeling the glorious weight of the crown on her perfect head, waving and blowing kisses at the adoring crowd, Harvey apparently realized he misread the card and Miss Philippines Pia Alonzo Wurtzbach was the true winner.

When your final grades weren't as bad as you thought they were going to be. #MissUniverse2015#MissPhilippinespic.twitter.com/u8bFfq0Hm6 — Jonathan Carmona (@Jacukina) December 21, 2015

While Miss Philippines was alerted of the truth and approached center stage, poor Miss Colombia was still enjoying what she thought was her sweet victory.

😱 Probably one of the most awkward moments on live television. The uncrowning of #MissColombia! #MissUniverse2015 pic.twitter.com/Y0MWQw7omR — Wiretapped TV (@WiretappedTV) December 21, 2015

After what felt like years of silent squirming, Harvey took the blame as Miss Colombia was decrowned and Miss Philippines was announced the winner.

"This is exactly what's on the card," he said, as the camera zoomed in on Miss Philippine's name as winner and Miss Colombia's as first runner up. Ouch.

Adding insult to injury, the failed host then tweeted (and deleted) an apology with a double misspelling.

Post-show, while we can only guess Harvey was hiding in shame, Miss Colombia somehow composed herself enough to leave a message for her fans:

You go, girl. Hold that head up high and remember, being second most dazzling woman in the universe isn't the worst thing.