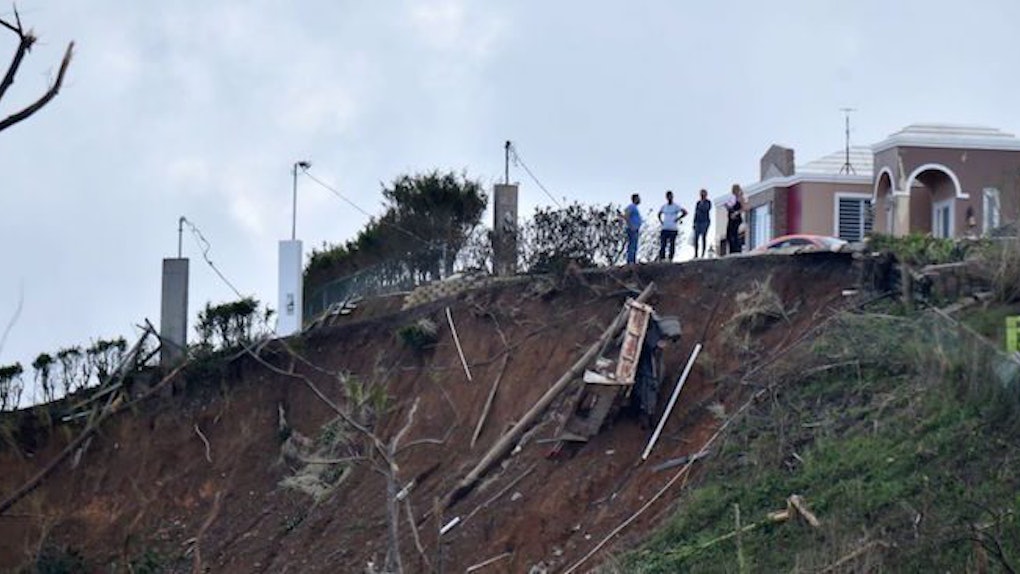 What Is The Jones Act? This Old Law Is Keeping Help From Puerto Rico

One week has passed since Puerto Rico was hit by Hurricane Maria, and many residents are still lacking basic resources necessary to survive. Water, food, and fuel are dwindling and government officials have put out a plea for federal assistance. One major roadblock is an obscure law that's making it difficult to get necessary supplies to the island. President Trump is considering lifting the Jones Act, which prohibits foreign-flagged ships from delivering goods between American ports. But what is the Jones Act? Well, right now, it's a stumbling block.

EARLIER: The Jones Act, signed by President Woodrow Wilson in 1920, was created to ensure that all ships traveling between American coasts were built, owned, and staffed by Americans. The whole purpose of the law was to strengthen the shipping industry after World War I. But today, with that piece of legislation still intact, foreign ships in neighboring countries cannot travel to Puerto Rico to drop off much-needed supplies without paying a tariff or stopping off in Florida to deliver the goods onto U.S. ships.

The Jones Act act was waived during Hurricane Harvey and Hurricane Irma, which prompts some pretty obvious questions. Like, why hasn't Trump made the same exception for Puerto Rico just yet? Eight U.S. representatives already sent out a letter on Sept. 25, asking that the legislation be waived for one year, and John McCain wrote a message urging the president to drop the rule as well.

Critics of the legislation say that it costs Puerto Rico hundreds of millions of dollars each year. Puerto Ricans are forced to pay shipping costs on imports from the United States, when they could instead be paying far less by importing from neighboring islands.

There are some practical reasons for why Trump might not have been as quick to lift the legislation as he was with Harvey and Irma.

The majority of Puerto Rico's ports were demolished by Maria and the largest port, located in San Juan, is overflowing with resources. However, there aren't enough ways to physically get the supplies out to those in need. Jose Ayala, vice president of Puerto Rico Services for Crowley Maritime Inc., told the Wall Street Journal,

It's pretty ugly out there. There is damage to the trucking infrastructure, to the distributors, to the supermarkets, to the roads. And then, if your infrastructure is not so damaged, and you can get a driver to the truck, there is no fuel to move the equipment.

Lifting the Jones Act, though, would help lower the burden of the cost of goods for Puerto Rico. Huffington Post reports that Puerto Rico would have to pay double the shipping costs for relief supplies from U.S. ports, as opposed to receiving far more affordable support from neighboring islands.

Trump, however, seemed more concerned with the politics attached to the Jones Act than anything else. On Wednesday, the president told reporters,

His tone mirrored the first few tweets that he sent out in response to Hurricane Maria, which seemed to lack the necessary amount of empathy and urgency for the scale of the disaster.

The president then turned his attention back to criticizing football players who took a knee during the national anthem, and proceeded to flood his feed with angry comments about the NFL.

The storm has left nearly 3.4 million people without power, and most without water, ABC News reported. But cash and gas for cars are in short supply. Puerto Rico's Governor Rosselló said, per The New York Times,

Puerto Rico, which is part of the United States, can turn into a humanitarian crisis. To avoid that, recognize that we Puerto Ricans are American citizens; when we speak of a catastrophe, everyone must be treated equally. If we want to prevent, for example, a mass exodus, we have to take action. Congress, take note: Take action, permit Puerto Rico to have the necessary resources.

If you're able contribute supplies to Puerto Rico, you can find guides for donation here, here and here.