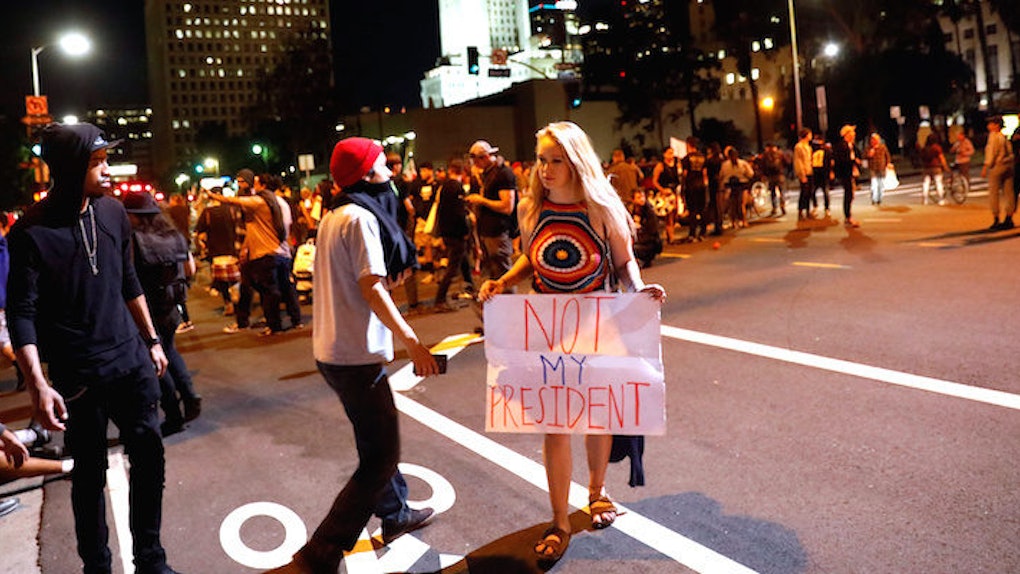 'Not My President' Goes Viral After Donald Trump Wins Election

Last night, in New York City, I marched with thousands of others to Trump tower. As we walked, and when we arrived, we chanted out our anger.

We tried to master our heartbreak -- or, at least, through collectivity, give it form.

The most ubiquitous of these chants, and the one which has become the hashtag to mobilize and unify the anti-Trump sentiment since his presidential victory, is "Not my president!”

I hate that phrase.

When your living room is on fire, you don't point at it and shout, "NOT MY FIRE! NOT MY FIRE!”

The thing is, it is our fire. This is our burning home. All of ours. All 318 million of us.

And we need to finally start reckoning with that fact, or this house we all live in is going to light up the night.

I believe denying the presence and power of the voices who put Donald Trump in the White House was the whole problem in the first place.

All these years, we hated what those voices were saying so much that we just stopped listening to them.

You have to look no further than the polls to see clear, concrete evidence of this. In the weeks leading up to the election, only four out of 67 major polls put Trump ahead.

FiveThirtyEight, which is famous for its accuracy, had her at a 70 percent chance of winning on election day. The New York Times had her even higher.

We literally had no idea how to gauge, let alone understand, how and why millions of Americans vote, or what they even care about.

When your living room is on fire, you don't point at it and shout, 'NOT MY FIRE! NOT MY FIRE!'

The confidence I felt on Election Day and the confidence I saw telegraphed from everyone around me, in person, online and on television, is grotesque to me now.

By the morning, I found out 47 percent of all voters supported Trump. I felt gutted. My denial wrestled my depression as my despair watched.

We'd obscured those people from view so well, and for so long, we forgot they were even there.

But, we had the luxury to do so --  to shut the door on them and stare lovingly at each other's blossoming social enlightenment.

Democrats had that luxury because they were winning, and they controlled the conversation in the media. Nothing more.

"Not my president" is part of the same habit. It, too, is an attempt to look away, to not accept the reality of this place we're all living in.

"Not my president" is just another way to deny what America is, and who lives here.

But those days are over.

It is time for us to look straight at what this country is rather than what it should be -- even if it burns our retinas, even if it makes us finally hate this place we call home.

Because, really, we should hate it. It's a brutal mess. That could never be more clear than today.

The last 10 years has drawn the partisan line in the sand so deep, members from either side will fall into it if they try to cross it.

And we've collectively, through partisan fever, forced nearly 45 percent of the country to align themselves with Donald Trump's views, even if those people don't entirely agree with them.

There has never been an election where more people hated both candidates and voted against the other rather than for their own.

So no, not all these people who voted for Trump are just racist, sexist rape-excusers who hate Muslims and give guns to their toddlers on Christmas.

Many are just people who felt they were never heard and are pissed off.

Are there Trump supporters who have deeply ingrained racist, sexist, xenophobic and violent views? Of course, there are. There are millions of them. But look at the numbers. Half our country supported Donald Trump.

It doesn't make sense to vote for Trump — a candidate obviously not in their best interest as a leader, a candidate who does not share their views — unless there is another, more emotional motive.

By ignoring his supporters in media and in the polls, we were complicit in Trump's presidency.

Trump's appeal, I believe, can be boiled down to one factor: Whether we like it or not, he was able to give a voice to people who felt voiceless.

The people I'm referring to are primarily rural-American whites without college degrees who have felt like they've been left behind and demonized, often while suffering economically, in the ethical growth of this country.

These are, of course, not the only people who supported Trump, but these are the ones who won him the election, especially in swing states.

Below is a voter map of North Carolina, which Trump won with clear support from rural counties.

Many of these are people who felt ignored by both parties and the media for a decade -- who only saw themselves represented or discussed as villains or dunces.

Michael Moore, who was one of the only liberal thinkers to acknowledge Trump could win, described this group as,

Angry, embittered working (and nonworking) people who were lied to by the trickle-down of Reagan and abandoned by Democrats.

He went on to tell NBC,

People see that he is maybe their messenger, even if they don't necessarily like him or agree with him.

The problem is for anyone who feels silenced, any voice is better than none.

In situations like this, it is the most human thing in the world to care less about what that voice says and more about its volume.

And Donald Trump was, without question, their loudest instrument.

This became clearer than ever during the primaries, when Donald Trump was universally hated and openly sabotaged by the Republican establishment.

He went fundamentally against so much of what they believed in, and yet his popularity only grew in its base.

Things conservatives would never have accepted from any other candidate — insulting POWs, sexual crassness and misconduct, a clear disinterest in religion, opposition to free trade, etc — the Republican base excused in stride.

Trump's voice was the only one so loud, liberals had to hear it — even if they didn't want to.

Democrats and the liberal media grouped all these people who now support Trump together for so many years as the unenlightened, the uneducated, the unworthy -- whose inability to see things our way makes them demonic.

And we've made that clear in the media and online.

But think about it from these non-liberals' points of view.

Think, for a second, how hard it would be to go against the grain of your peers and change a political viewpoint you were either raised with or you see echoed all around you.

Imagine, for example, how difficult it would be for you, as a liberal, to change your mind about abortion.

I don't even think that'd be possible for me.

But that is exactly how difficult it is for those who are against things like abortion to support them. That's what we're up against.

Making fun of people has a place (it is my primary form of income), but at this point, it seems it's been our only method of interaction across party lines, other than shouting at our keyboards. We need to change that.

OK, but why has Donald Trump's voice, in particular, become so powerful?

The way I see it, his supporters gauge the power and volume of his voice on how effectively it can make us, the liberal media (it is a thing, guys), squirm.

Donald Trump is a master of this. He's basically given the liberal media (and the Republican establishment) an epileptic fit for 16 months straight.

This voice basically allowed his supporters the satisfaction of saying, "FINE, YOU'RE GONNA CALL ME AN ASSHOLE? WELL, FINE, IM AN ASSHOLE. FUCK YOU."

They see Donald Trump as their human molotov cocktail. They get to go into the voting booth on November 8 and throw them into a political system that has made their lives miserable.

As The Huffington Post points out, by March, Donald Trump had already received $2 billion dollars worth of free advertising from the media, mostly by doing something people deemed outrageous or offensive.

However, it's hard to argue with the fact that these supporters, who don't necessarily agree with what he's saying but still voted for him, don't really care about the consequence of his words.

At the very least, you could say these people care more about expressing their frustrations than they do about not encouraging institutional racism, sexism, xenophobia, islamophobia, transphobia, homophobia, etc.

And yes, I have a huge and heartbreaking problem with that.

'Not my president' is an attempt to look away, to not accept the reality of the country we're living in.

But to understand why this happened -- how this could have happened -- I think one needs to understand these people simply care more about using Trump as a vessel to vent their frustrations and enter them in the conversation than they do about the content of his words.

The thing his supporters always say when asked what they like about his campaign is he "speaks his mind."

What they mean by that, I believe, is simply he "speaks in my name."

Now, we need to reckon with our complicity in this state of affairs.

We cut them off like a gangrened limb, rather than even attempt to help them understand why we believe what we believe, and why we think what they believe is dangerous or hurtful.

It is time for us to look straight at what this country is rather than what it should be.

Our method for teaching them our values boiled down to a single strategy: public shaming. The republican establishment did much of the same.

And when that didn't work we just ignored them in our echo-chamber and essentially forgot they were there.

After all, we could only "win" for so long. At some point, they were going to send a driver in to take the wheel. We helped them choose one high on coke.

The "promise" of this country, that we are a nation of progress and spectacular possibility, unlike any other, seems so blatantly naive to me today.

America is nothing but its people. It has no sacred texts. It has produced no miracles. We have no destiny.

It's just 318 million people trying to live together without hurting one another.

It certainly made no improvements yesterday when we elected the 45th president of the United States, Donald J Trump.

And now, yes, we have to fight and scream our hearts out to protect those whom our president has publicly stated he plans to assault and demean. We have to do all that. We will do that.

But we also need to acknowledge how we got here.