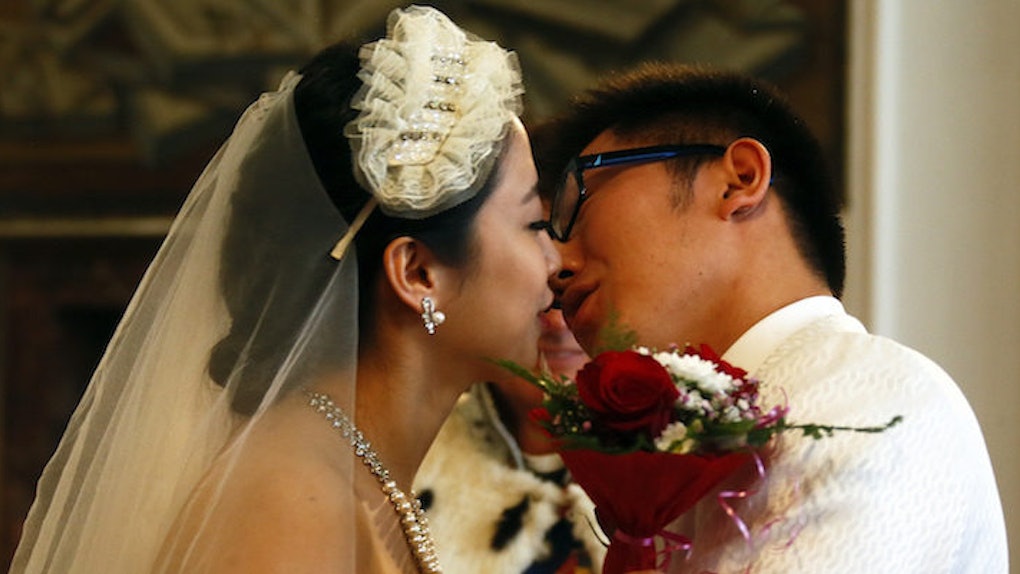 Chinese Wedding Traditions Are So Dangerous That Bridesmaids Are Dying

A 28-year-old bridesmaid from the Wenchang, Hainan province in China died after being forced to drink too much alcohol during a wedding banquet.

The woman was forced to drink on the bride's behalf, as per usual Chinese bridesmaid duties, resulting in alcohol poisoning back in September. The woman choked on her vomit and died as a result.

A video of the woman drinking at the banquet has been circulating Chinese social media since September, leading to lots of debate over the traditional duties of bridesmaids in Chinese culture.

Despite being used to represent the bride in a classy, honorable way, the women selected to be bridesmaids in these weddings are unwillingly involved in acts that go far beyond typical bridesmaid duties.

The bridesmaids are treated more as guards than close friends, set with the job of appeasing wedding guests, protecting bridal suites and gifts and drinking alcohol to excess on the bride's behalf.

The women are typically treated like rag dolls and are subjected to harassment and assault in various forms.

And clearly, in some cases, are at risk of death.

Wondering why these women don't just say no to being a bridesmaid and report the instances of assault?

Well, very similar to the US, there are areas of China that take these cases of assault very seriously, and there are areas that don't empower women to feel they can report these instances at all.

Women in these less liberal regions often don't consider reporting any acts of misconduct or sexual abuse that occurred during a wedding because they feel pressure to maintain the idea of being a pure, virginal woman for their future husbands.

Though being a bridesmaid is certainly an arduous task no matter what country you're in, women in China are becoming less than eager to take on the role due to the underlying danger that comes with it.

It's gotten to the point where professionals are being hired as stand-in bridesmaids, making these women a part of wedding budgets just like the venue and flower arrangements.

If anything, it only perpetuates the objectification of women since their bodies are literally for hire in these circumstances.

Sure, you aren't subjecting a "friend" to this overtly misogynistic tradition by hiring out, but paying someone with no direct relationship to you doesn't alter the fact that these women are being treated horribly. Whether you care more or less about the person makes no difference.

I may have only been to a few weddings in my lifetime, but I am well aware that the celebration of marriage is meant to be joyful and exuberant. I was honored to be chosen as a groomsman for my brother's nuptials, and was in no way hesitant of taking on the role.

I could never imagine these Chinese traditions ever existing in weddings in the United States.

"Always a bridesmaid, never a bride" could suddenly have a much darker meaning for women in China if this continues.

Citations: Being a bridesmaid in China is now so dangerous that couples are hiring professionals (Business Insider)