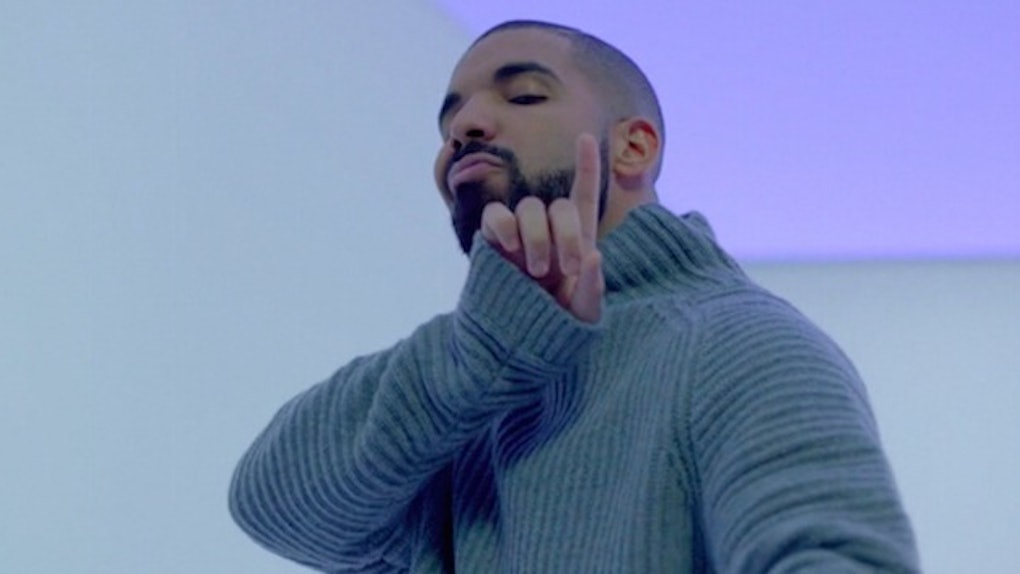 The bar dance floor was packed with people distractedly bopping to the DJ’s set, all low-energy rocking to generic hip-hop beats...

...but then Drake’s Grammy-nominated (HAHA) “Back to Back” came on, and everyone got hyped as sh*t.

I was confused because, frankly, the song’s not Drake’s best. It’s low-key as hell and not exactly a banger, and yet the whole crowd was bumping in a way they hadn’t been seconds earlier.

“Back to Back” is an assertion of dominance, which is likely what caused the ruckus.

That’s what 2015 was like for Drake: Not success after success, but steady assertions to prove it’s Drake’s world and we’re just here to lap up what he so generously puts out.

Drake hurled “Back to Back” at Meek Mill in August after Meek failed to come up with a response to Drake’s initial (and sub-par) diss track, “Charged Up.” Meek started the beef, attempting to call out Drake for having ghostwriters, and Drake shut it down.

Yeah, you getting bodied by a singing n*gga.

The Internet lost it over “Back to Back,” making meme after meme, and then Drake went ahead and used those memes as a backdrop at his OVO Fest performance in Toronto.

Can you even imagine? Performing your second diss track at your own festival in your own city slamming someone who deigned to try to bring you down, while a f*cking PowerPoint presentation shows jokes people all over the world made in support of you?

Pleeeeaaase, think before you come for the great one.

It would have been enough to claim 2015 was The Year of Drake if all we had was that OVO Fest moment -- but it’s far from everything Aubrey had to offer this year.

The boy dropped two full-length albums in a year when we were waiting and waiting for Rihanna and Kanye and Frank Ocean to give us the tiniest hint of a record.

First, Drake Beyoncé’d If You’re Reading This It’s Too Late, shocking even me, dedicated child of the age of free (OK, illegal) downloading, into actually purchasing an album or, as Drake calls it, a “mixtape.”

He presented the 17 tracks of the album as something he didn’t really put a lot of work into -- but go ahead, you can have the scraps of his musical talent.

Drake insists that wasn't a power move but just him being honest. He told Leon Neyfakh in a wonderful Fader profile:

By the standard I hold myself and 40 to, [If You’re Reading This is] a bit broken.

The album was something to clear his head before getting into his real forthcoming album, Views From the 6.

But even with an imperfect, mixed album, Drake managed major achievements.

How many times did you and your crew scream “RUNNIN’ -- THROUGH THE -- 6 -- WITH MY -- WOES” this year? Aubrey told Fader he wanted to make a song about his hometown (the 6) the world would embrace, and goddamn he did it.

As he has long done, Drake presented himself completely on If You’re Reading This, no apology, baring his paranoia and his ambition. Emma Healey (herself of Toronto) explained best:

In terms of low-key musical dominance, Future could’ve swept 2015. But instead, Drake jumped in to make the album What A Time To Be Alive with Future, in what Jon Caramanica at the New York Times described as “a strategic checkmate of a project.”

By joining forces with Future, Drake kept his hold, continuing to show he runs this town.

Collaborations and cosigns are another way Drake asserts his power, positioning himself as the gatekeeper to success: You need Drake’s approval if you want to play in the big leagues.

Between If You’re Reading This and What A Time, Drake bumped up the summer with “Back to Back,” “Right Hand” and, of course, “Hotline Bling.”

Do I even need to describe the pull “Hotline Bling” had on all of us? Like thousands of other Millennials, I spent Halloween showing my love for it.

I mean sh*t, my own hip-hop-averse mother tweeted her love for the song and video.

And, remember, these were merely some singles he casually dropped between two full-length albums as he’s working on his real album, Views.

Not everything Drake did in 2015 was gold -- the Coachella kiss with Madonna was awkward during an overall bad show, the albums weren’t 100 percent fire and he may have lost Serena Williams the US Open.

But Drake hustled through the last 12 months to show us over and over again he’s the captain now.

They always tell me ‘Nobody's working as hard as you’ / And even though I laugh it off man, it's probably true.

Five years of pushing later, with no sign of slowing down, Drake has achieved true dominance. I can’t wait to see what he does in 2016.