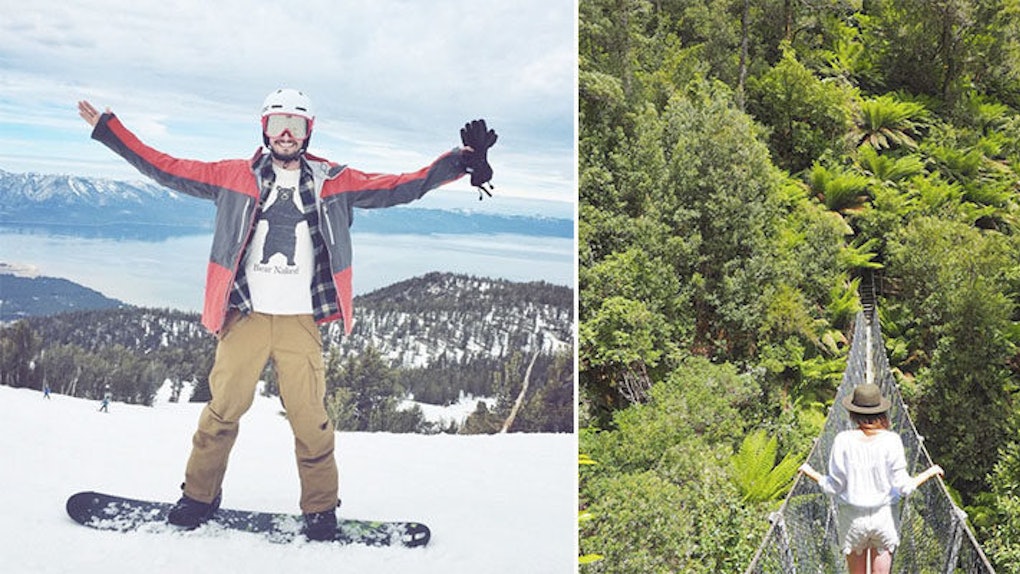 A Year Of Adventure: 6 Ways To Become A Badass World Traveler In 2016

As 2015 comes to a close, it's normal to get sentimental and start looking back on the memories made over the past year.

Every year has its ups and downs, and some are more eventful than others.

But as I began to think about my 26th year and the ones before it, I realized for me, there's one fool-proof way to make memories that will stand out in my mind forever, and that way is to travel.

On top of the priceless experiences that come with exploring a new place, traveling makes you a more independent, open-minded person and teaches you life lessons you might never learn cooped up at home.

So while your health and fitness goals and saving money are important (and I'm right there with you on those, too), I would argue that we should all put traveling more towards the top of our to-do lists for 2016.

To help, I reached out to two millennial travel bloggers who are killing the game, Brooke Saward of World of Wanderlust and Trevor Morrow of Trevor Morrow Travel, to find out how we can all make seeing the world a realistic resolution in 2016.

Get your priorities in order.

Whether it's limited vacation days or a lack of funds, it's easy to make excuses when it comes to travel.

Morrow, who is based in Los Angeles and has done everything from Tarzan-ing in the jungle to brewery hopping in Australia, admits his globetrotting lifestyle isn't plausible for everyone, but he says if there is even the smallest amount of wiggle room in your budget, all you have to do is prioritize.

So maybe you can't afford a ticket around the world just yet. The key then is to think local.

Saward, who booked a one-way ticket from her home on the Australian island of Tasmania to London in 2012 on the day of her college graduation and has been at it ever since, agrees.

It always surprises me how much fun you can have by just making a short road trip to the beach or trekking a nearby mountain. One of my favorite things to do is re-explore my home.

Be smart with your money.

Both Saward and Morrow have learned to put travel first when it comes to spending.

For Morrow, that means limiting how many times he dines out per month and making his own lunches every day.

For Saward, it's ridding herself of possessions she doesn't need, and finding free activities to do with friends.

Taking all your old clothes and belongings to a weekend market is a great way to make some quick cash, as is selling your car. Working extra shifts not only puts more money in the bank but also prevents you from spending money going out with friends so often, and over time you realize there are lots of free substitutes like catching up with a friend for a power walk instead of spending money going out for lunch.

Of course, both are also pros at being thrifty on the road when necessary.

Morrow suggests renting an Airbnb or trying out home exchanges, Couchsurfing, and WWOOF-ing.

Saward is a fan of the app HotelQuickly, which “works kind of like Uber, but for last-minute hotels.”

Both suggested grabbing provisions at local markets instead of dining out for every meal, and taking advantage of free walking tours. Morrow says,

I'm a big fan of Sandemans New Europe Tours. They offer great free walking tours in a variety of European cities. I think it's an awesome thing to do on your first day in town.

Do your research, but be flexible.

Saward is a visual person who starts planning a potential trip as soon as a photo catches her eye.

Morrow has a list of destinations a mile long, but he says it's important to be flexible.

Be open to what comes your way naturally. If a friend asks you to travel to a destination you've never daydreamed about, consider going! Or if you hear about a concert or a festival that piques your interest, bump that destination up on your list so you won't miss it.

It can also be helpful to plan your trips based on the time of year (“Is it rainy season in August? Will it be packed with tourists in June?”), Morrow suggests, and don't forget about current exchange rates.

I've been to Europe when the Euro is killing the US Dollar, and I've been in Europe when the Dollar and Euro are on par. It's much, much more fun to go (to Europe or anywhere) when you can make your money go further.

Don't be afraid to travel alone.

Working around your own schedule is hard enough, which is why many of the world's top travel bloggers, Saward and Morrow included, often travel alone.

Saward says embracing the “no commitments” phase of her life made it easier to jump right in.

It forced me to rely only on myself, which is a really humbling experience, knowing that if your whole world was taken away from you, you could make it on your own.

Morrow remembers how he was “scared shitless” on the plane to Nepal alone at age 18.

But let me tell you, when you return home, you'll be confidently swaggering through the airport high-fiving strangers (or at least that's how you'll feel). Know that you may be scared now, and that's normal, but you'll be very proud of yourself for doing it. Derive confidence from knowing that traveling alone makes you a badass. Think about those people sitting at home, afraid to go out and experience the world. Do you really want to be one of those people? No!

Both travelers agree that the world isn't as scary as it looks on TV.

In general, people are way more kind and good natured than the mainstream media would have you believe. Be street smart, be aware, be informed, but don't be scared. Oh yeah, and don't be afraid to strike up a conversation with people at your hotel/hostel, at a bar, or on the street. If it gets weird, who cares, you'll never see them again.

Do it right while you're young.

Whatever stage in life you get bitten by the travel bug, own it! But the earlier you start, the easier it is to reap the benefits.

For Saward, who recommends everyone make Southeast Asia, South America and a Eurotrip priorities in their twenties, traveling young meant becoming more confident in herself.

I became a person I actually like to be around. Before travel I cared too much about what others thought of me and didn't know what I did and didn't like (because I wasn't adventurous enough to try anything new).

Morrow points out that a well-traveled resume makes you a better person on paper and off.

Aside from making you a way more interesting person at parties, traveling while you're young can really change the rest of your life. Traveling makes you kinder, more understanding, more patient, more self sufficient -- really the benefits are endless. And it's not mentioned often, but the experiences had and skills acquired from traveling while you're young, especially for longer periods of time or in places that one might consider challenging, can really be selling points in a job interview.

He suggests three types of trips for millennial travelers to kick off your 2016 bucket list:

1. Go somewhere as geographically far away from, and as culturally different from, your home as you can. And if you can, stay there for as long as possible. A few examples would be places like India, Nepal or Japan. 2. Travel in your home country. It's easy to be enticed by beautiful photos to foreign places, but it's important to know about the country you call home and the people who populate it. America is absolutely gigantic, and diverse, and beautiful. Take a road trip, camp, visit national parks. Visit out of the way places. Eat at diners. Talk to the waitress. You'll be surprised that just visiting different parts of American can provide a 'foreign' experience. 3. Party! Drink vodka in Russia, party on a beach in Greece, go to a nightclub in Eastern Europe. Attend Carnival in Brazil. Hangovers only get worse as you get older, so do your party traveling now!

Well, what are you waiting for?!