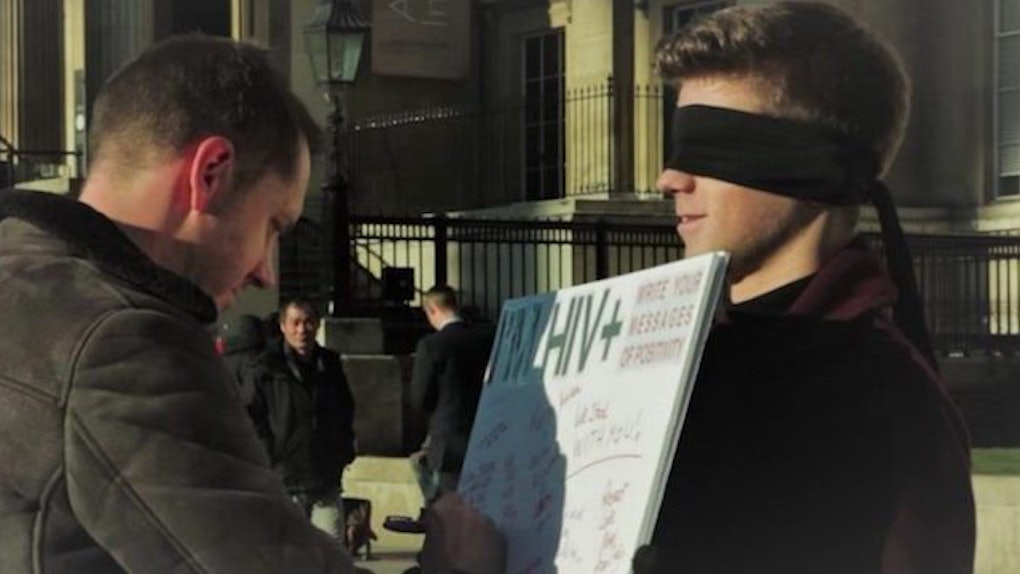 Video Of People Reacting To HIV-Positive Man Will Inspire You

There are lot of negative connotations that come with the three letters, H-I-V.

That's why 22-year-old George Hankers brought it upon himself to bring more awareness to the disease.

Hankers, who has been HIV-positive since the age of 19, has never let the disease control his life. So to help break the stigma that's often associated with HIV and support those living with it, he went to the streets of London for a social experiment video.

In the video, Hankers is blindfolded, standing in the very center of bustling Trafalgar Square in London, England, holding a board that reads, "I'm HIV-positive, write your messages of positivity."

It's a little unnerving as a viewer to watch people approach the board, knowing the stigma that comes with having HIV.

Those who have it are usually depicted as dirty, promiscuous and volatile. You are immediately judged for it, without being given the chance to defend yourself.

But what happened when strangers came over to Hankers was not what I expected.

Instead, it's inspiring, emotional and left me unashamed when I teared up like crazy at my office desk.

"It gets better, trust me," one middle-aged man wrote, before bringing Hankers in tight for a hug.

“You are me and I am you” and "We are all with you buddy, keep smiling" were just some of the other messages left for Hankers to read after removing his blindfold.

As expected, he couldn't contain his smile while reading all of the heartfelt words.

“When I was diagnosed with HIV, I battled with very low self-esteem, and I'd been blinded from hope,” Hankers said in a press release.

“The sense of unity I had after the experiment was very heartwarming," he continued. "It really goes to show that there is more comfort out there for people living with HIV than we initially think.”

Hankers continues not to let his diagnosis define him, and he posts regularly on his blog, Still Human, in hopes of helping other young people in a similar situation.

He also works alongside Shape History, a social advocacy group set on "bringing together causes, brands and influencers, to create campaigns that inspire action." The group is set on enlightening the world on a topic not many know much about.

Though a prominent illness in the gay community, HIV does not distinguish between sexual orientation, gender, race, color or creed. This video should open the eyes of viewers and start a conversation many are afraid to have.

Everyone should be well-informed on the topic of HIV — whether they've been exposed to it before or not — and allow Hankers' efforts to motivate them to educate others as well.

Citations: Young Man Living With HIV Was Brought To Tears By Strangers' Messages Of Support - See more at: http://www.thegailygrind.com/2017/03/15/young-man-living-hiv-brought-tears-strangers-messages-support/#sthash.JHbjINR4.dpuf (The Gaily Grind)