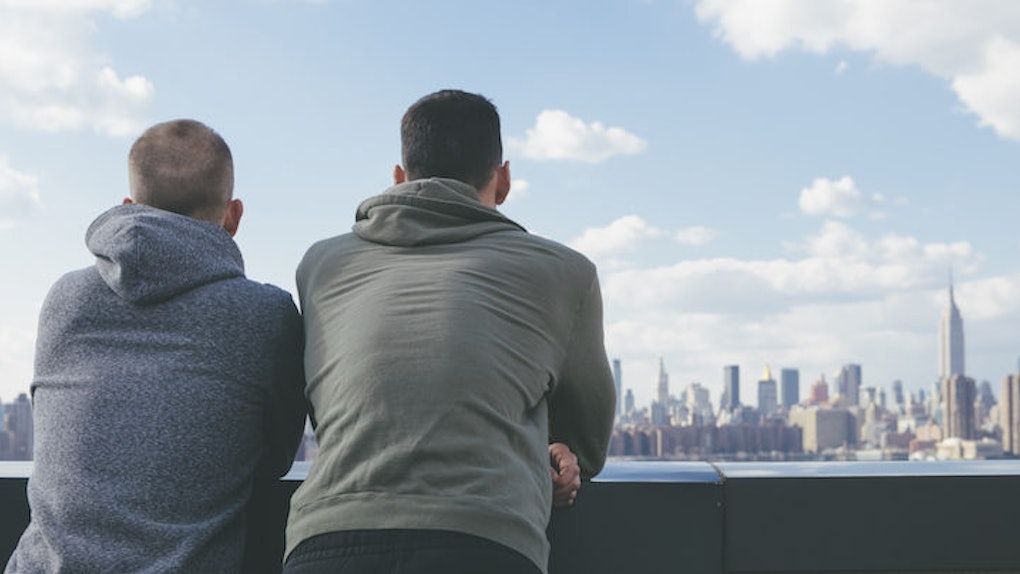 There are a variety of reasons why I've stopped talking to a potential suitor before.

Despite his overwhelming good looks, sometimes, the guy just isn't who I thought he'd be. Maybe I thought his mannerisms were off-putting, or he might've been a bit too feminine or too masculine for my liking. To me, these are all valid excuses.

But then, I stopped talking to someone because they had HIV... and that's inexcusable.

The guy told me his status after two relatively successful dates. He didn't have to do that, but as our conversation gradually shifted in the direction of sex, it was bound to come up.

I wasn't sure how to react. I had never met someone who was HIV-positive, and frankly, I knew close to nothing about the disease at all.

I immediately began to panic.

We had never gotten to the point of anything close to sex, but we did make out in my room. Did that mean I caught it? I had been feeling sick the days prior, so was I now infected? How would I know? Are there signs?

As I grew more overwhelmed and flustered, he explained we never would have had sex without him revealing his status to me. And he also explained more about his low strain and how undetectable it was due to the medicine he was on.

I was still on edge, however, viciously browsing the internet for the number of a free clinic. I didn't even know what to say to him.

Of course, my intentions weren't to treat him like some wild animal. I honestly just didn't know what to say. I wasn't well-informed on the subject, and I didn't want to come off like a complete idiot. I needed to know more.

As it turns out, while HIV diagnoses continues to drop, with an increase in testing and prevention efforts, more than 1.2 million people continue to live with it in the US. Even scarier, one in eight aren't aware they're infected.

After our make-out session, I was relieved to find out HIV can only be spread through certain bodily fluids — blood, semen, rectal and vaginal fluid and breast milk.

But my Google search wasn't satisfying enough. I hadn't spoken to my date since he told me, aside from a quick apology for reacting so harshly.

But had he already suffered through worse reactions? How do you date when you live with HIV? These were all questions I wanted answered.

So I reached back out to him.

Luckily, he had never been able to share his story before. And we both hoped our talk would open up a conversation about those living with HIV and how they continue to make the most of their lives, despite the stigma that comes with being infected.

So it's time you all listen up:

Sean Abrams: So, when did you find out you had HIV?

Tom*: Technically, I contracted HIV in December of last year (2015). I tested positive for it around the end of January, and I had three different tests because I didn't think it was correct. My results were completely accurate at the end of February.

SA: Did you get in contact with the person who passed it along to you?

T: No, because I wasn't 100 percent sure who it was, and I don't think it's something you can go accusing someone of. I have an idea that makes more sense in my timeline but I never asked directly.

I'm not mad at anyone, either. I put myself in this position ... you can't change anything. The only thing you can do is get tested more often to try to avoid this altogether.

SA: What did you know about HIV/AIDS before contracting it?

T: To be honest, not much, and that's why I completely understood your reaction. I was in your place. I was there. I can't be mad at someone for reacting that way because, honestly, I probably would've reacted the same way a year ago.

You never think it's going to happen to you. You just don't think it's possible until it happens.

You never think it's going to happen to you. You just don't think it's possible until it happens. Anyone can contract it, too. It's predominantly known in the gay community, but bisexual men who have been with girls and guys can pass it along also. Black, white, straight or gay — it doesn't matter.

SA: Do you make a conscious effort to know more about it now?

T: I still don't know as much as I should, but I have definitely researched it. People who are giving it to other people, more often than not, don't realize they have it and are not on any medicine. It's the ones who don't know who are accidentally transmitting it.

I take medicine right now, and it's actually almost impossible for me to transfer it because my viral load is so low. If I got an HIV test right now, it'd come back negative.

SA: What kind of reactions do you get when telling guys you're HIV-positive?

On the other hand, my roommate doesn't care. My best friends don't care.

I would never have put someone in a position where it'd affect them in a bad way. But people just respond to hearing it differently, and anticipating someone's reaction is always hard.

SA: What's made you hesitant about talking to guys and trying to put yourself out there again?

T: It's just embarrassing. People get the wrong idea about it, and they think you're a dirty person who has sex with a ton of people, and that's not the case.

In the beginning, I didn't want to tell anyone. So, early on, when things would get to the point of sex, it would stop the conversation. Guys who were throwing themselves at me before, all of a sudden, wanted nothing to do with me.

Guys who were throwing themselves at me before, all of a sudden, wanted nothing to do with me.

That's probably one of the hardest parts. You get friend-zoned or just cut off completely. These guys aren't trying to be mean people; it's just a lack of education on the subject.

SA: What's your dating life been like in the past year?

T: I've had sex with one person in the past year. It was protected, and yeah, it was fine, but I didn't enjoy it. I think I'm more afraid to have sex than other people are afraid to have sex with me ... I just have this bad connotation with it now because I got infected by having sex with someone who was infected, and it's something I need to get over.

I was telling people before I met them, and then, they'd stop talking to me. Now, I go on a date or two, and if it's good and it seems like we're going to hang out again, then I'll disclose it.

I want to go on dates, not hook up. I've found [dates] to be better, because when people get to know me, once I do tell them, they have a different view of [HIV] and of me. I'm not the dirty guy they envision who is out having a lot of sex.

SA: Do you continue to try and use Tinder, Grindr or other positive-friendly apps?

T: It's rare that I use them or even date at all anymore. Some guys advertise it for the wrong reasons and want to have unprotected sex with each other, and that's just not what I'm looking for.

I was talking to my doctor, and he told me not to be afraid, to get back in it and that I shouldn't not be having sex.

SA: I'm one of those skeptics who says they don't have time, don't know where to go and isn't sure if my insurance will even cover it. But are there places you can be tested for free?

T: You can go to the Department of Health. It's free. You sit there for a little bit longer, but it's free, and they test you for everything.

I used to go every 3 months, even if I only had sex with one person, because that's just me. I think everyone should be doing it.

SA: What are you doing now to stay so optimistic and have such a positive outlook on the rest of your life?

T: I don't like to dwell — I never really have. Some days, I'm feeling good, and others, I would cry about it. Overall though, I think I'm doing well. I'm hoping somebody will get to know me for me and not have those bad connotations of having HIV, because that isn't who I am.

Citations: How Do You Get HIV or AIDS? (AIDS.gov)