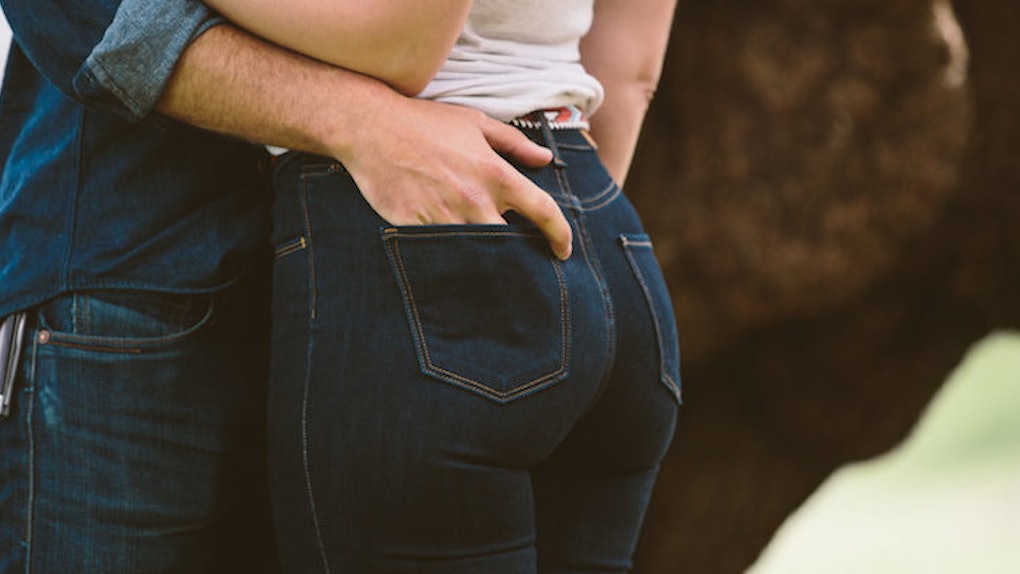 When Did It Become OK For Guys To Touch My Assh*le Without Asking?

Ah, butt stuff. WTF is up with butt stuff in the bedroom?

Guys, I'm about to dive into some pretty deep sex talk (no pun intended), so prepare yo'selves.

I’ve been wondering about butt stuff for some time now. I've had my fair share of great sexual experiences, most of which were great because I commandeered the guy in the bedroom (Hey, I know what I want and when I want it, as all women should).

Yes, friends, the unwelcome finger is a plague upon bedrooms across America.

Now, it's no secret that aimlessly fooling around with the female body is a healthy thing. And such directionless fooling around is usually not a waste of time -- it’s a journey toward figuring out what does the trick (read: reaching the big O) for a specific body. Stimulating a woman's clitoris, for example, is one tried-and-true way to make any woman climax.

For this type of man, who's headstrong in life and equally adventurous in the bedroom, ass-play is not too much in the least bit. It's wild, unexplored and exciting for him; thus, he feels it will also be the same for the woman he's with.

And sexperts support his claim. Apparently, besides clitoral stimulation, there's more than one sure-fire way to make women scream in pleasure: stimulating a woman's clitoris while also stimulating her butt hole, also known as the good ol' "one in the pink, two in the stink." If done correctly, this method can get a woman off.

But(t), the keyword in that last sentence is "correctly."

If you choose to indulge in ass-play like this, you have to make sure the woman knows it’s coming. Because the worst thing a man can do to an unprepared woman is slip a tooth, a nail, a fist or what-have-you into the part of her body from which fecal matter comes out. It is painful, disgusting and downright wrong.

In fact, I would go so far to say we should even turn unsolicited fingers in the butt into a specific legal issue.

Opinions toward butt stuff in general differ depending on whom you ask. I, myself, am not much of a butt person. Never was one, and probably never will be one.

I won't get into the dirty details here, but a recent “Unwelcome Finger” incident left my bum so sore that I was left walking like the Hunchback of Notre Dame for two consecutive weeks and could only wear leggings -- no denim.

As you can imagine, I was both pissed the f*ck off at the perpetrator and in a sh*t ton of pain. Again, no pun intended.

But even women who are into butt stuff have the same criteria for wanting to be butt-fingered: Just ask first.

Even for Beatrice, who, admittedly, has a piqued interest in exploring sensations through the back door, being attacked by an unwelcome finger is anything but sexy. It's straight up scary.

So, what can we learn from all of this? Well, we know that a woman will only orgasm if both her mind and body are relaxed. We also know that in order to relax the smaller orifices of the body, we sometimes need things like, oh, I don't know, maybe verbal consensus or lubricant, or a combination of the two.

Men, please, unless we ask for it, do not lead with the unwelcome finger.

I'll put it for you this way: A woman's body is like a car, and her vagina is like the engine of that car. When it's 30 degrees outside, you aren't exactly just going to hop in your car and zoom out of your driveway, are you?

No. Not if you know what’s good for you.

That engine needs to be warmed up for a solid few minutes, at the very least, before it can be revved up. Otherwise, that car will not function properly. And if you do choose to be the idiot slamming the gas pedal and going from zero to 60 in a second flat, you'd probably crash your car into a tree and kill yourself.

Bringing the metaphor back full circle here, you’d be the idiot ramming your finger into the cold, dry vagina, killing your chances of making the girl come as well as ever getting a text back from her, seeing as you just finger-banged her, uninvited.

So, I will repeat my advice: Stay clear of the hole less traveled unless we give you the green light. If we do, we'll set the pace and prepare by completely relaxing both mentally and physically. We'll take the lead if we're willing and ready, after which you can follow along in a way that makes our sexual experience comfortable for the both of us.