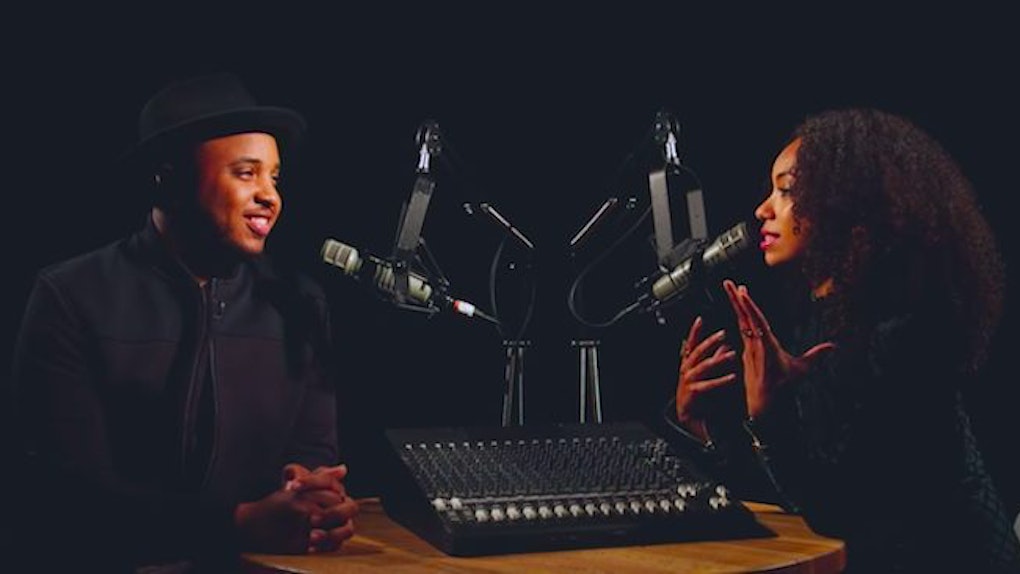 Can Black People Be Racist? Here's Why They Can't

Dear White People made a huge splash when it first hit theaters in 2014 and caused even more controversy when news spread of it returning to Netflix as a full series.

The concern many users shared was that the show was racist, since a Dear Black People title would be considered offensive.

Director, Justin Simien, and the show's star, Logan Browning, filmed an interview for Huffpost Black Voices that debunks myths surrounding not just the provocative show, but racism in general.

It's an assumption that the show is finger-wagging or blaming white people for something and it's also an incorrect assumption. It's actually a show about the experience of being a marginalized group amongst a bigger group that doesn't necessarily see you.

Basically? Watch the show! Dear White People is more about the black experience than it is about white people, specifically. Also, it's important to note that it is the title of the radio show that Logan Browning's character, Samantha White, runs on her campus.

The radio segment, like its namesake Netflix series, is what White uses to communicate her feelings about microaggressions that she and other black students experience at the fictional Winchester University.

And this is why a "Dear Black People" narrative, or title would be unacceptable, according to Simien.

Since Dear White People is equal parts humor and seriousness, flipping the script would mean that the race jokes would be on black people.

Simien explains that in society, that is already the case.

All of American culture is basically a Dear Black People. We are very aware of where we fit and don't fit in culture just by watching TV. On the other side, because oppression is very real in this country, if a white person makes jokes about black people — that actually affects black people's lives.

In short? Black people talking about their world with white people is their reaction to the oppression they face. White people creating a humorous show about black people would just be them throwing their privilege in the faces of the oppressed.

Browning pushed the point forward by saying that black people can't be racist.

To understand her logic, we have to acknowledge that mainstream America accepts the concept of racism with a limited definition. The traditional description in Merriam-Webster describes race as,

A belief that race is the primary determinant of human traits and capacities and that racial differences produce an inherent superiority of a particular race.

We often point out racism based on discriminatory acts without acknowledging what racism is in its fullness.

The rest of the Merriam-Webster description says that racism is,

A political or social system founded on racism.

This political and social (and, I'd add, economic) reality of black people is what renders them unable to oppress white people in the way that they are oppressed.

Racism is the oppression of a marginalized group in a society that is based on white supremacy. If you are a white person, then you naturally benefit from white privilege.

This means that the exclusionary things black people are often accused of being racist for doing — creating a "Black Lives Matter" movement, attending historically black colleges, having a "Black Girls Rock" event  — could never be racist.

Those things do nothing to systematically disadvantage white people politically, socially, and/or economically.

So how does this work in real life when you're white and you get called a racist name or hear a "white joke?"

That one time you got called a name you didn't like wasn't right; it was also not a reflection of your everyday life.

A tweet about white people not using enough seasonings in their food won't affect how you get treated during a trip to the grocery store.

However, jokes about black women having attitudes do lend to them being discriminated against and physically violated in schools and the workplace.

Stereotypes about black men being violent thugs do translate into them being physically assaulted or killed.

Every experience that black people have — from going to school to driving to seeking housing — is affected by racism.

The buzz phrase "white privilege" simply calls out the fact that daily experiences with racism are not a white person's reality.

And this is exactly why white people don't get to say the n-word.

Stay with me here.

How many things do white people have? They have all of the things. There is this one word that black people took and use as a form of endearment and it's ours. Let us have this one word.

The dominant group does not get to decide how the oppressed group navigates their oppression. The n-word is what black people have claimed as their private term to use however they choose.

When black people say it to other black people, they can be sure that there is no racism fueling its use.

Because white people originally used the word as a racist term against black people and racism is still alive and well, white people are permanently uninvited to the n-word party.

It's kind of like those people who have a nickname that they only let friends and family who are close to them use.

You cannot meet those types of people and suddenly begin calling them their nickname like you have a space in their inner circle. Consider the n-word that permanent name that you cannot use.

And if it's really bothering you that you cannot participate in saying the n-word or have a show called Dear Black People, you should probably ask yourself why you want to be in the position of the oppressed so badly.

Y'all ain't oppressed. I'm sorry. By the way, it's not as good as it sounds. You don't want to be oppressed.