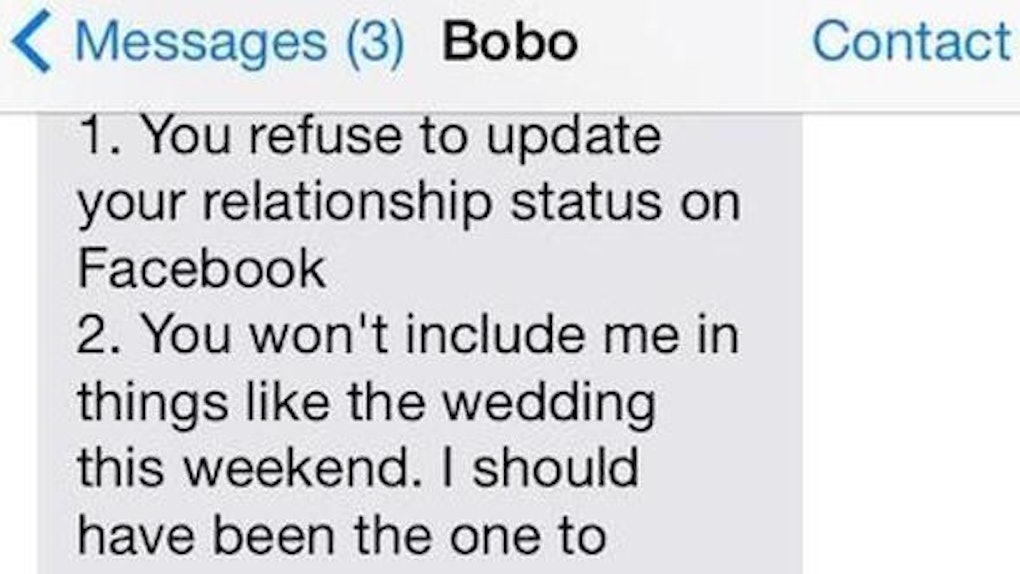 Apart from ending a relationship via sky-writing or a Venmo comment, breaking up with someone over text is pretty much the lamest, most cowardly way to bring things to an end.

That doesn't seem to stop people from doing it far too often.

I mean, yes, I hate talking on the phone too, but there are certain moments that warrant it -- such as when you have to tell your significant other you had sex with your pilates instructor while they were at their great aunt's funeral after her fatal parkour accident.

We are setting a really bad example for kids growing up today who, at this rate, will have lost the use of their voice boxes by the time they're 21.

First of all, if you're going to break up via text...

...be VERY sure you are texting the correct person.

Try not to jump to conclusions.

Also, it's important to fight your own battles...

...because no one believes you didn't plan this, Derek.

Pay attention kids: This is an excellent example of anti-breakup-text kung fu...

...and this is a master class in preparing and presenting someone with a sh*t sandwich.

Glad she cleared this up.

When in doubt, there is nothing wrong with asking your parents for break-up advice.

This person definitely needs to reorder their list of reasons...

...and this person needs to reconsider theirs. You seem like an assh*le, Bobo.

It was a short affair.

Be wary of references...

Sh*t... this is actually a really good burn.

OK, I take it back. Certain break-up texts I'm 100 percent in support of.