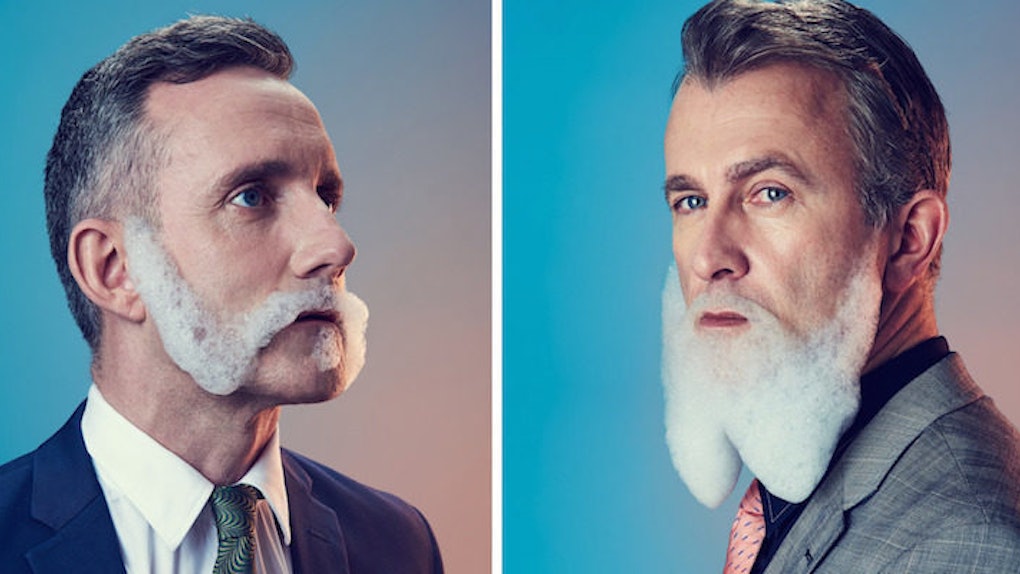 Ever since the lumbersexual movement transformed half the world into hipsters, beards have been a pretty hot topic.

Since then, we've seen guys doing all sorts of crazy sh*t with their facial hair.

I mean, seriously, who could forget the elaborate beard-art or those insane glitter beards that took social media by storm?

Recently, New York City-based photographer Mindo Cikanavicius set out to highlight the fleeting nature of society's style trends by creating a visual series that focuses on men and their beloved beards.

However, these dudes aren't rocking your run-of-the-mill facial hair.

That's right. Cikanavicius' thought-provoking project, fittingly titled "bubbleissimo," features everything from serious-looking faces covered in sudsy scruff to full-on beards made entirely out of bubbles because, let's face it, sculpting a robust soap beard is a lot less labor-intensive than growing the real deal.

All of these photos will take you right back to your days of taking bubble baths as a kid, and they're pretty much guaranteed to give you a good laugh.

Take a look at the pictures below to see this artist's hilarious photo series.

For his latest project, photographer Mindo Cikanavicius set out to poke fun at the world's obsession with facial hair...

...by creating a fun photo series that showcases men and their beloved beards.

However, these aren't your ordinary beards.

All of these picture-perfect beards are actually sculpted out of bubbles!

The series features everything from a foamy Fu Manchu...

To a bubbly Balbo beard...

...and a frothy version of the classic full beard.

Cikanavicius said, "I created this project to examine modern men and their grooming obsession to facial hair, and how it personifies masculinity."

Citations: I Shoot Men With Bubble Beards To Show How Temporary Trends Can Be (BoredPanda)