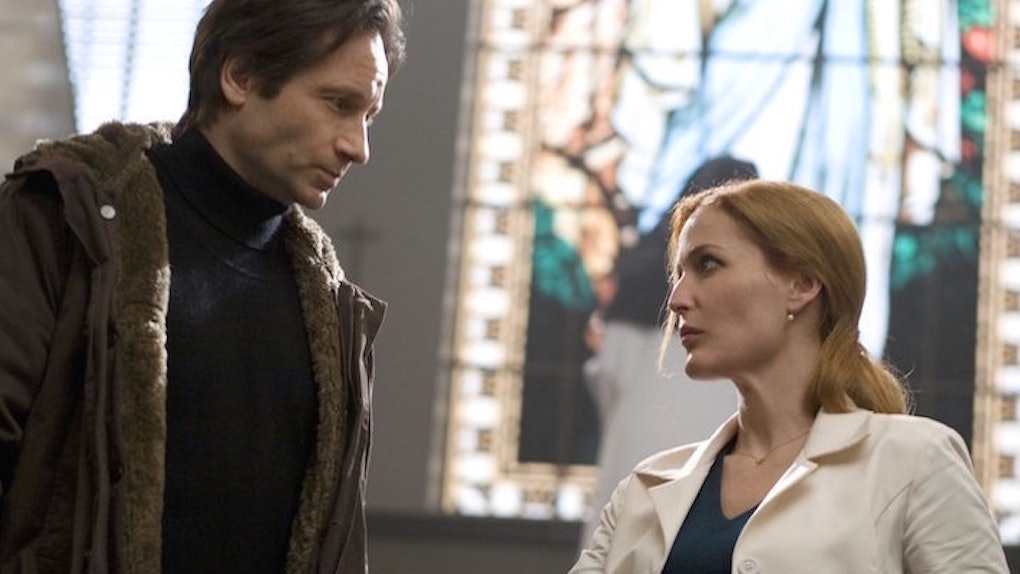 If the power-trio of "The Force Awakens," "Mad Max: Fury Road" and "Jurassic World" didn’t already make this abundantly clear, nerd nostalgia is kind of a big deal these days.

Thankfully, as a confirmed geek-culture obsessive, I’m down with that trend, especially since it’s brought "The X-Files" back to my TV screen for a six-part miniseries this year.

Having been lucky enough to be raised by parents with a liberal idea of what “appropriate television” consists of, I grew up with Mulder, Scully and the terrifying monsters they chased each week. Through their investigations, I saw this series tackle the important questions: Are we alone in the universe? Should we trust the government? Are these two ever gonna f*ck?

Being the experienced X-Phile I am, I expect these new episodes to answer approximately none of those questions. The show was never exactly known for wrapping up its storylines.

Nor was it known for realism. Or so I thought. At the tender age of “wayyyy too young to be watching 'The X-Files,'” I handled the disturbing storylines by reminding myself that it was all just a TV show.

But now that I’m older, wiser and perpetually wired in to the Internet, I’ve learned that some of the more memorable episodes of this seminal sci-fi series have much more in common with real life than I would have imagined.

As it turns out, the show’s writers often used actual events as inspiration for our weekly dose of terror.

The truth is out there. And it’s really, really messed up. Just check out the stories behind these classic episodes…

"Breaking Bad" mastermind Vince Gilligan first collaborated with Bryan “Heisenberg” Cranston on this 1998 X-Files episode, writing a script about a seemingly insane man who takes Mulder hostage as a passenger in his car as he speeds toward the California coast.

Trying to save her partner, Scully learns that Cranston’s character is the victim of a Navy brainwave experiment, a side effect of which involves a steady building up of pressure in the inner ear. The only way for a victim to keep the pain at bay is to travel west at a high speed. If he fails, his brain explodes.

No one ever accused "The X-Files" of subtlety.

Bizarrely, the episode actually takes its cue from two real-life government programs, Project HAARP and Project ELF. Although they sound like subtitles in the next dystopian YA novel series, these projects attracted the attention of nutty conspiracy theorists long before “truthers” were posting videos to YouTube and moving into their parents’ basements. While the government insists that the purpose of HAARP and ELF was to improve communication over radio waves, many claim the true goal of the programs was mind control.

Gilligan simply took those claims to their illogical extreme.

This Season Two episode diverged from the typical "X-Files" formula by focusing on a serial killer with no paranormal powers. Not that it was any less creepy. Sometimes, true life is freakier than fiction.

Case in point: Held captive by the deranged lunatic Donnie Pfaster, Scully suffers from hallucinations in which Pfaster takes on the shape of the devil. Series creator Chris Carter lifted this detail from true accounts given by surviving victims of Jeffrey Dahmer, who reported that he “shape-shifted” when they were kept prisoner by him.

Obviously, such an effect was the result of pure psychological terror, and not an actual supernatural experience. But... maybe don’t watch this one late at night?

Within the first few minutes of this controversial episode, a deformed woman gives birth to an even more deformed baby, three other deformed men bury the baby alive, and family therapists across the United States double their client lists.

Having handled aliens, werewolves and skinwalkers, by Season Four, "The X-Files" was ready to take on true terror: inbred, backwoods maniacs.

The fact that the episode consists of a couple of true stories woven together is also worth mentioning. The writers originally developed the idea by watching "Brother’s Keeper," a documentary about four low-IQ New York State brothers, one of whom, William, may have been murdered by his brother Delbert.

Delbert was acquitted at trial due to insufficient evidence. Now you know what to watch once you’ve finished "Making a Murderer."

The other real-life terror behind the episode comes from an entry in Charlie Chaplin’s autobiography, in which he describes staying with a family who kept their quadruple amputee son hidden under the bed.

This detail inspired a scene featuring the inbred matriarch of the family, and also your nightmares tonight.

A two-part episode, this entry into the overarching alien mythology storyline of "The X-Files" features Japanese scientists from the mysterious Unit 731 conducting experiments to create alien-human hybrid beings.

Of course, the real-life events behind the episode didn’t involve any extraterrestrial genetic mutations.

They were much, much worse.

Unit 731 was a real biological and chemical warfare research project within the Imperial Japanese Army during World War II. While it was active, the members of Unit 731 experimented on anywhere from 3,000 to 250,000 people, performing vivisections without anesthesia, injecting prisoners with diseases, inducing frostbite and engaging in plenty more atrocities you’d rather not know about.

Oh, and after the war, all members of Unit 731 were granted immunity by the United States in exchange for sharing their “research” findings.

Predicting all those anti-GMO memes your aunt would eventually share, Season Two’s “Blood” sees residents of a small town plummeting into paranoid violence after being exposed to a dangerous pesticide.

The climax of the episode features a victim climbing to the top of a clock tower and shooting into the crowd below. This scene was inspired by Charles Whitman’s University of Texas rampage, during which he killed 16 people.

While it was likely a brain tumor, not cheap produce, that drove him to violence, it’s no less scary.

Having surprisingly little to do with murderous hockey players, “The Jersey Devil” is a Season One episode loosely inspired by sightings of a bizarre being reported near the Pine Barrens of New Jersey throughout the 20th Century.

According to legend, the Jersey Devil was the 13th child of a woman who, barely able to feed her 12 children, wished for the next one to be the devil.

As the story goes, the curse worked, with the baby mutating into a monster moments after its birth, killing the midwife, fleeing its home and convincing generations of rural Jersey kids to use protection.

Over the years, many people claimed to spot the creature, especially during one week in 1909, when literally hundreds of people reported encounters. Those who saw it often described the Jersey Devil as a cross between a kangaroo, goat, bat and horse.

In "The X-Files," the monster is merely a humanoid cannibal, because no one wanted to see what 1993 low-budget CGI would do with that description.

Much like “Nisei” and “731,” “Paper Clip” has Mulder and Scully meeting a mysterious figure whose past sheds light on a dark side of American history.

In the episode, the fictional Victor Klemper is a former Nazi scientist whose post-Holocaust career involved creating alien-human hybrids, all under the protection of the American government thanks to Operation Paperclip.

As with Unit 731, Operation Paperclip was a program which allowed German scientists to live freely in the United States if they shared what they learned from their work during World War II.