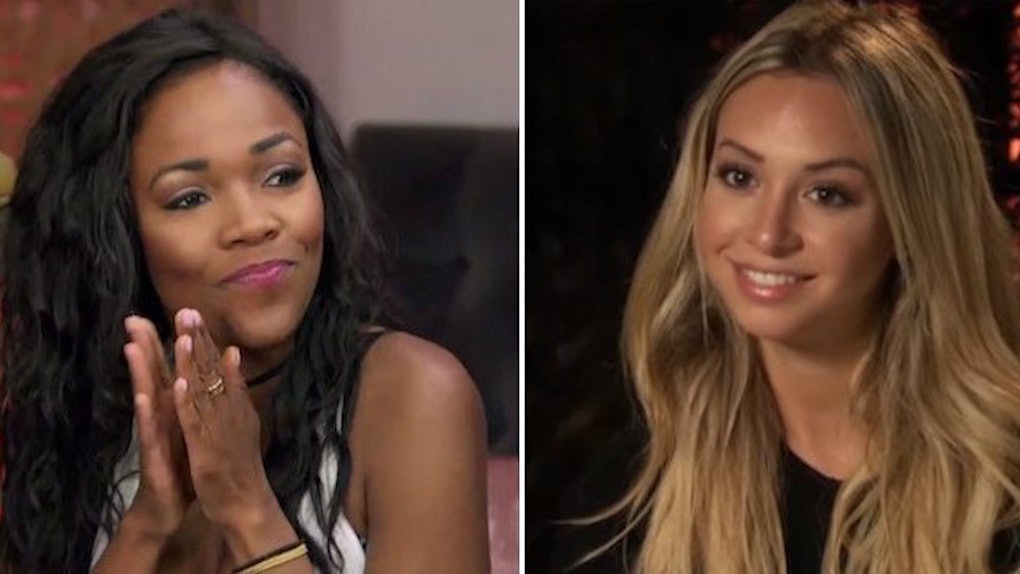 Jasmine From 'The Bachelor' On Corinne's Feud With Taylor

Nick Viall's season of "The Bachelor" might have come to an end, but that doesn't mean we've seen the last of our favorite contestants.

Among the show's most popular girls —  including Dolphin Girl and Corinne — was 29-year-old Jasmine Goode from Maplewood, New Jersey.

Jasmine was one of the fierce young ladies known on the show for telling it like it is and choking out Nick Viall. Yeah, remember that?

Well, Elite Daily had the chance to chat with the gorgeous gal and talk about her time on the show.

We also got the 411 on what really happened between Taylor and Corinne in the house and off-camera. DUN DUN DUN.

Jasmine begins by telling us what it was like to come on the show and find out Nick Viall was "The Bachelor." She said,

I was pretty excited. For some reason, watching how Nick was, I thought we'd have more of a connection. I feel like he was open to dating a woman like me. So when they said it was Nick, it seemed like we could get along — watching him on "Paradise," he seemed very charming, so I was definitely excited about it.

Nick ended up sending Jasmine home halfway through the season, but not before she put up a solid fight.

In one of the episodes, if you recall, Jasmine was visibly upset because she never received a one-on-one date.

Jasmine reflected on her frustration at the time and said,

You know, looking back now I get it. Everyone can't have a one-on-one, it makes sense. At the time, it was hard because, you know, after we left New Orleans it was nine of us, and everyone there except me and Whitney had one-on-one time with him. I was surprised I didn't still receive that date, and it was Kristina, and I was like, 'Wait, what? I'm confused. Everyone had time with you except me and Whitney.' It just hurt. I'm trying to be positive and trust the process and not get in my head, but it's hard to not get in your head when you see everyone having deeper connections because of those one-on-ones.

OK, we also obviously had to ask Jasmine about the choking incident. You know, that time she pretended to strangle Nick.

Jasmine clarified what really went down:

It's so funny watching it because when it happened it didn't seem that extreme, but because of the music, everything makes it so much more dramatic. It actually all started as a joke that kind of turned into something else. The days before, I was talking to one of the girls in the house and we were just talking about being in relationships and how frustrated you are with your man, and how, you know, little things bother you, like even just how you take it out on him. We were joking around, some girl was like, 'Yeah, I slap him” and I was like, 'Yeah, I'm just gonna choke him out.' A joke! That conversation turned into me joking about it, and when alcohol is involved, I just said it to him like, 'I just wanna choke you,' but it wasn't meant to hurt him or be evil and mean, but I can see why people in the world think I'm psycho, but I'm definitely not!

I can be the first to tell you Jasmine ain't psycho — the girl is chill AF.

We then talked about the "Women Tell All" special, aka the 60 minutes we watched Taylor bitch out Corinne.

During the episode, Jasmine sat front row and made some noticeably strong facial expressions.

I asked her to comment on the feud and her reaction to their fights.

I think going into it, I knew off the bat Taylor and Corinne would be the highlight of the whole show and that's just frustrating because we're coming back to talk about issues we had with each other months ago, and I think a lot of people are giving a lot of comments like, 'You were on Taylor's side, no you were on Corinne's side,' just going back and forth. For me, I was never on a side. In the house, you don't see it, but I had a conversation with Corinne, me and her. We talked it out. Taylor, I tried to talk to her in the house but she kind of just brushed me off a couple times, and I said that on the show, I was like, 'Taylor, you walked around the house like you were better than everybody,' at that time. Right now I don't have a problem with her, but at that time, yes, that's what you did.

If people think that's me taking teams or taking sides or flip flopping, it's not. I'm just talking about what happened at that time, and at the time me and Corinne had issues, we talked it out. Taylor had issues with her, I didn't like it, I tried talking to her, she didn't talk to me. That was my issue with Taylor and Corinne; they both know how I feel. I don't have an issue with them, we're kind of in an OK place. I'm not saying we're all best friends, but, you know, we're cordial — we can be in the same place and we're not gonna kill each other.

Jasmine also commented on Taylor's fight with Corinne over her "emotional intelligence." She told us,

The whole Taylor and Corinne, it's so annoying, it's like, you just wanna be over it. We're done, we get it, you're never going to be best friends. I think they're both wrong on both sides about things. They're just two different people and they're just never gonna be friends. I think Taylor, her being a mental health counselor, I think she tried to just figure out what the issue was with Corinne, and that's why people are vocal like, 'What's going on? I think she shouldn't have did that,' because then it just kind of made everything bigger than what it was. For me, just leave it alone. Taylor, you don't wanna talk, don't talk to her — emotional intelligence and all that crap — you should have just left it alone.

Now that all the drama and negativity are out of her life, what's Jasmine up to? She shared,

Well, I actually moved to LA. I was in San Francisco, but I'm not dancing anymore. I was gonna go back to New Jersey where I'm from, but I love California and kind of wanted to spend another year out here. I felt like LA was a perfect opportunity to move away from San Francisco and start kind of fresh. Right now, I'm still teaching dance, not sure if I'll be on a dance team again, but never say never. So we'll see.

It's unclear if Jasmine will be on "Bachelor In Paradise," but fans are definitely crossing their fingers.

Jasmine is also doing consulting for girls who are interested in auditioning for professional dance teams like the NFL and NBA.

If you're interested in working with her or want more info, you can email her at jasminegoodemedia@gmail.com.