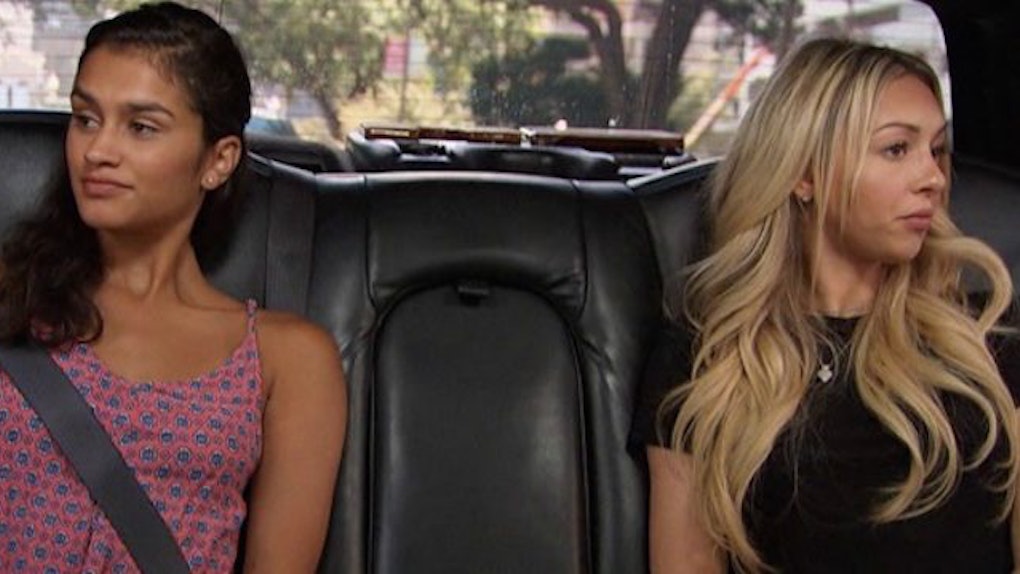 Taylor From 'The Bachelor' Discusses Feud With Corinne

With the exception of grease-drenched food, crippling nationwide anxiety and unnecessary nail art trends, there's nothing America loves more than a feud between two, under-120-pound girls.

This nation has relished in the media-driven brawls between Lauren Conrad and Kristen Cavallari, Jennifer Aniston and Angelina Jolie, Taylor Swift and Katy Perry and, most recently, “The Bachelor” contestants Corinne Olympios and Taylor Nolan.

In what has been described as “like, literally the actual worst season of 'The Bachelor' ever,” Corinne and Taylor butted heads while competing for professional mumbler Nick Viall's love.

The two women's issues were sparked after Corinne jumped into Nick's pants heart in a bouncy castle and then slept through a rose ceremony as if it were a one-credit college yoga course.

Corinne eye-rolled her way through a confrontation with Taylor and Sarah while presumably humming Mariah Carey's “Obsessed.”

The fifth episode of the season opened with another discussion between Taylor and Corinne.

The conversation quickly evolved from Taylor telling Corinne she lacks “emotional intelligence” to Corinne calling Taylor a bully for “not saying hi to people in the morning.”

We laughed. We cried. We poured ourselves three more glasses of chardonnay.

Following this conversation, Corinne seemed to be the only one who was shocked when she and Taylor were chosen for the dreaded two-on-one date.

Three go in. Only two come out.

After the trio went to the bayou and met with a voodoo witch, Taylor was the unlucky one who was sent home by Nick.

“I went on a date in Louisiana and all I got was a spiritual cleansing and Zika” -- a shirt the producers gave Taylor, probably.

This wasn't the last we saw of her, though.

Taylor (post-voodoo spiritual cleansing) interrupted Nick's date with Corinne to speak her truth and give her final two cents.

Elite Daily had the chance to speak with Taylor prior to the “Women Tell All” episode of “The Bachelor,” which airs on Monday, March 6.

We started by asking Taylor if Nick Viall was the man she expected him to be.

He was kind of who I thought he would be, but then there were definitely some things that I wasn't necessarily expecting from him. I mean, I still think he's a great person, but I definitely don't think that we really had opportunities to connect on the level that we could've.

With that being said, we needed to know if she was actually falling for him while living in the “Bachelor” mansion or if she was just enthralled by the show at the time. She said,

I would say the feelings were very real in the beginning. I don't think I got to the point of falling for him. I started to get really hopeful about things and was really excited and really giddy and those were really real and fun feelings to have, but once all the drama started coming up in the house, he started to be paying more attention to that than on building our relationship, and that's kind of when all my excitements kind went down hill and I was kind of like… 'I don't like this anymore.'

Of course, we needed to know more details about the two-on-one date.

If you recall, when Taylor and Corinne's names were announced, Taylor gave a Jim Halpert-style glance to the camera as if to say, “Mhmm, good one, producers.”

Taylor commented on her lack of shock, saying,

I mean, after our conversation in Wisconsin, I was like, they're totally going to put us on a two-on-one and when we got the date card, I'm just like 'Mhmm yeah… like great… I hate this.'

Now, it's hard to tell exactly what we're watching on reality TV. Are the contestants getting bad cuts? Are their every moves being dictated by producers? Or are these real, true, legitimate things that are happening?

Taylor revealed how her feelings toward Corinne were portrayed on screen and how she really feels about her nanny-having nemesis,

So, I didn't have that strong of feelings about it. Watching it back, I didn't see all the things she [Corinne] was saying in her ITMs [In The Moment interviews], and it seemed like she did have those feelings of dislike towards me and for me when I was there. I was really just talking about her behaviors in the house, just being really objective about that like this is what she's doing and this is what this means. Watching it back, I was like, wow I didn't realize how dramatic this was. But yeah… I was very surprised at how exaggerated her expressions were of me, but I think that's also her personality and knowing what plays well on TV I guess.

Another question that is still in the back of Bachelor Nation's mind: Why did Taylor interrupt Corinne and Nick's date after she didn't get a rose. She gave us the deets,

So the opportunity came up, and I thought about it and when he gave her the rose, I didn't really say anything, I just kind of hugged him and was like 'Mm OK.' So, I just kind of felt like I wanted to speak my peace and let him know that if he was not giving me a rose because of the things she [Corinne] said, that they weren't true and also just... to speak my truth and say my peace before leaving. Otherwise, I think I would've kind of spiraled in my thoughts had I not actually said how I felt about not getting the rose.

Of course, the promos for the upcoming “Women Tell All” special allude to a major throw down between Corinne and Taylor. We asked Taylor if she felt like she got it all out and if she was satisfied with everything that went down. She said,

I think I said everything I wanted to say, I don't know how much you'll get to see. That's one thing I'll say about the edit, they have… A whole week worth of filming and all of our interviews mashed down into an hour and a half almost and there's a lot you don't get to see... It's just what makes the most sense with the storyline. So for me and my interviews, I was very much in a gray area when it came to my relationship with Corinne, but, you know, what they're going to show on the show is obviously going to be the more extreme side of it where I'm talking about the two-on-one versus the stuff when I'm talking about how concerned I am about her and wanting to help her out, and there's a balance there. I think 'Women Tell All' is going to be interesting.

Interesting, indeed. Fans of the show notoriously look forward to the tell-all episodes, which air before the season finale.

We luckily haven't seen the last of the women from Nick Viall's season of “The Bachelor.”

Because we're as gossip-hungry as the rest of the country, we wanted to know Taylor's thoughts on the possibility of Corinne getting her own reality show. Taylor shared her thoughts, saying,

I mean I'm more kind of like, whatever, like, good for her. She's doing stuff she wants to do and meeting her goals. That's great. I think... we're just very different people and have very different lifestyles and not that one is better or worse, but they're just different. So yeah.

This is my formal petition to dub “so yeah” as the official tagline for this season of “The Bachelor."

Taylor concluded our interview by telling us her biggest take away from her "Bachelor" experience.

I would say my final thought on being on the show [is that] it was probably one of the most challenging experiences I've had in my whole life. I don't think I've ever been as challenged... Watching it back you learn so much about yourself I'm glad I did it it's been extremely tough at times and sometimes I hate it and wish I'd never done it. But then, once I get past that uncomfortableness, then I'm actually like, no this was actually a good thing. It just sucks at times, and I'm super thankful for all the girls I met through it, and they're all wonderful so it's a nice little family I'm in now.

Make sure to tune into the "Women Tell All" episode of "The Bachelor" on March, 6 at 8 pm on ABC.