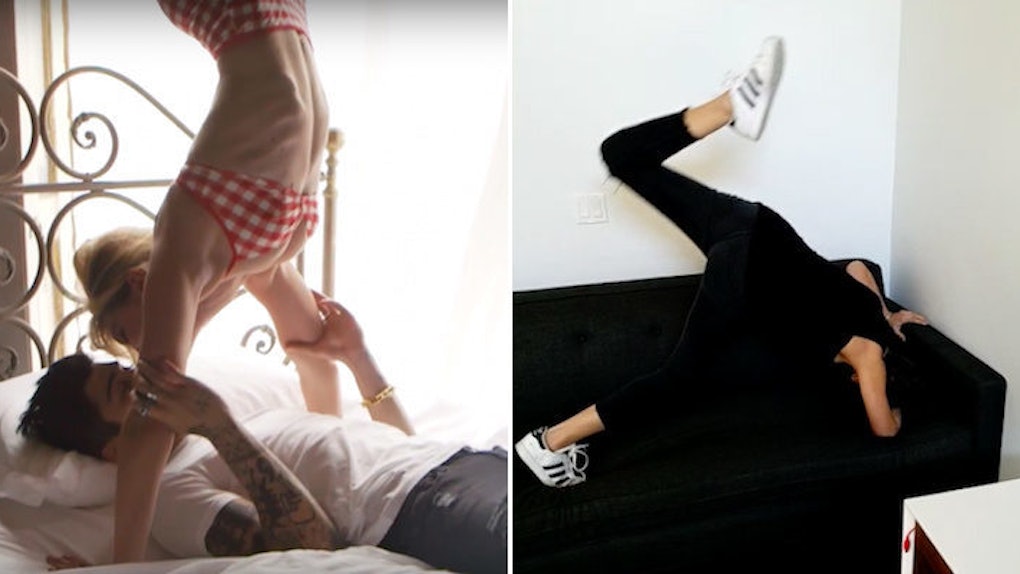 Can we talk about the fact that Gigi Hadid has the strength of a professional body builder, apparently?

I mean, have y'all seen the crazy sh*t she pulls in that Vogue photo shoot with Zayn in Naples? She straight-up does a handstand on a BED. Beds are squishy AF! That's crazy!

Not gonna lie, I 100 percent thought someone was holding up her legs when I saw that photo, but now, a behind-the-scenes video revealed, nope, Gigi just really is crazy strong.

There is no one holding up her legs. She is just delicately balancing them on the wall like some kind of hyper-graceful robot.

LOOK AT THIS CRAP! HOW CAN THE HUMAN BODY DO THIS?!

Honestly, think about doing this yourself -- or, you know what, don't even think. Just look at these videos of my co-workers, aka normal, non-android people, trying to do this pose.

First up: Tina, who made a valiant effort but lacks the strength of a supernatural being.

Next up: Gigi, who despite sharing a name with Gigi, still does not possess crazy muscles.

What Katie makes up for in enthusiasm she lacks in robot body.

Eitan really went for it, but sadly, he, too, is not super-human.

And finally, Talia was actually pretty good at it. Apparently, she goes to the gym a lot. OK, fine, Talia.

In conclusion, this is impossible and Zayn should definitely be frightened his girl could probably throw him across the room.

I'm not saying Gigi Hadid is an android, I'm just saying it's a possibility we need to consider.