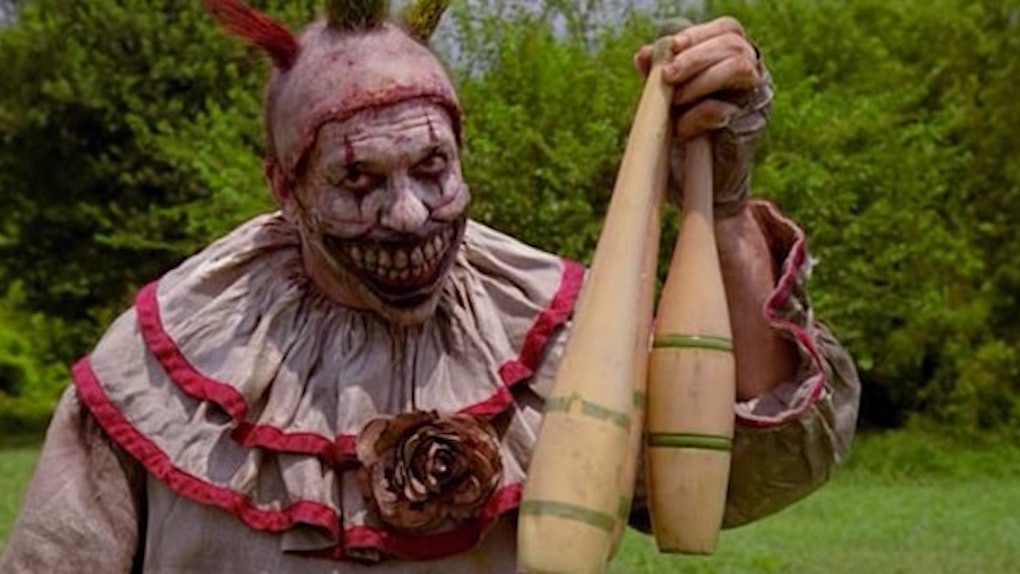 OK, so I know it's only July, but every day we're inching closer and closer to September, which means we're getting closer to the premiere of American Horror Story's seventh installment.

There has been a lot of hype surrounding Season 7, especially since we found out this year's storyline would tackle the 2016 election cycle. As usual, though, producers of the show have been pretty hush-hush with the rest of the details from this next chapter, leaving us high and dry as we wait for more info.

Lucky for us, a Twitter account with the handle @AHSLeak just posted a 15-second video that's rumored to be the leaked first teaser trailer for the upcoming season.

In the trailer, the camera slowly moves through a dark room filled with white balloons until we see a single red balloon that quickly pops and reveals a fookin' terrifying clown in its place just standing there being all nightmarish and sh*t.

The video plays on tropes of past AHS trailers: creepy music, mysterious images, terrifying reveals, etc., so it definitely seems legit, IMO. The creepy clown also makes a lot of sense since Ryan Murphy confirmed Twisty the Clown from Season 4 would be back this year.

The only thing that's got me skeptical about it is the show has a history of messing with us, and, after last year's sneaky attempts to throw us off with a series of different, unrelated Season 6 promo trailers, I'm not sure I trust anything that comes outta their filthy, deceptive mouths anymore.

In addition to this *potential* trailer, Ryan Murphy has given us a few other clues about the new season. The first was way back in May and featured a pretty scary sketch of an elephant (the symbol of the Republican party) with blood red lips.

The next featured this blue wig with the caption "AHS Season 7: Red, white and blue clue."

And the most recent seems to be a still shot from one of this season's episodes.

The showrunner's Instagram also features a ton of mysterious pictures taken at the Versace mansion, so who knows if all of that will add up to anything significant this season. We can guess all we want, but, sadly, we won't know until September.

In the meantime, we can be excited that series heavy hitters like Sarah Paulson, Billie Lourd, and Evan Peters are returning, and we'll get to see newcomers Colton Haynes and Lena Dunham this time around, too. (*slowly chants* Jessica Lange, Jessica Lange...)