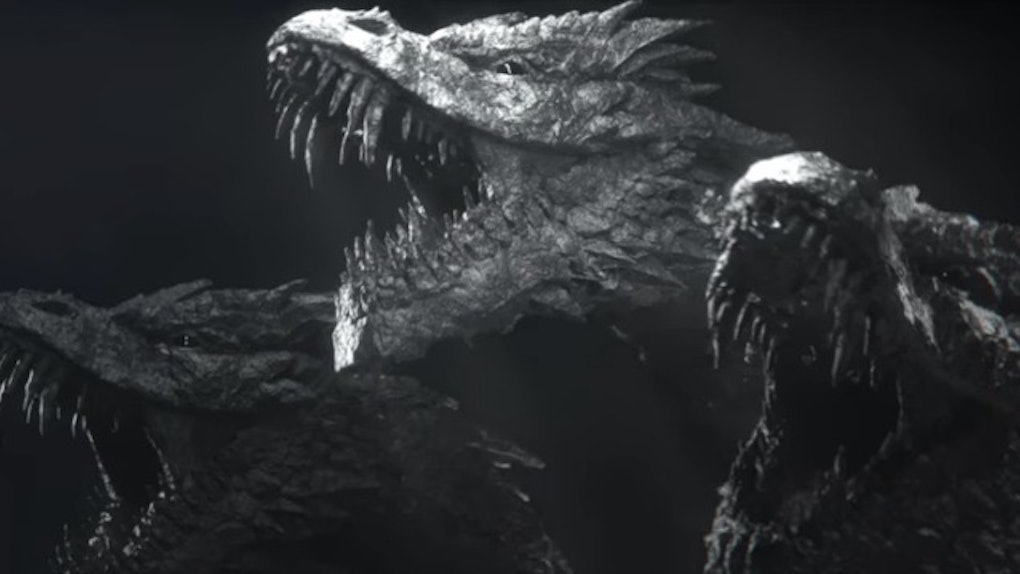 5 Details From The 'Game Of Thrones' Season 7 Sigil Teaser

Thursday, the entire world watched and waited for a "Game of Thrones" Facebook Live session that froze not once, but twice.

Finally, after over an hour of waiting, the ice melted and we learned "Game of Thrones" season seven will premiere on July 16 on HBO.

It's been quite a week for "GoT" Nation.

Wednesday, we got a look at the first "Game of Thrones" season seven poster released by HBO, and it revealed some pretty awesome details.

There's a lot to catch in the clip, so let's start by taking a look at this epic tease.

Aside from the stone sigils on the screen, the next detail that should grab you are the voices of all the characters we hear.

Here's everyone who spoke, and what they had to say:

Robert Baratheon: "...kill every Targaryen I get my hands on."

Cersei Lannister: "Everyone who isn't us, is an enemy."

Balon Greyjoy: "We are ironborn, we take what is ours."

Olenna Tyrell: "You don't think I'd let you marry that beast, do you?"

Qyburn: "I now proclaim Cersei of the House Lannister, Protector of the Seven Kingdoms."

Daenerys Targaryen: "Lannister, Targaryen, Baratheon, Stark, Tyrell — they're all just spokes on a wheel. This one's on top, then that one's on top, and on and on it spins — crushing those on the ground."

Ned Stark: "The same thing is coming for all of us."

Jon Snow: "There is only one war that matters: The Great War — and it is here."

Except for Jon's last words, every other line in the teaser has already been spoken on the show.

However, this sigil teaser is packed with at least five tiny details you definitely missed, so take a look!

This line is nothing new. You've heard the "Mad King" say it, Jaime Lannister talk about it and Bran see it in his visions.

However, one theory holds the "Mad King" isn't talking about burning his subjects, but instead the White Walkers! This may sound a bit out there, but hey, who knows?

2. Daenerys Targaryen talks about all the houses fighting for power as "spokes on a wheel."

Lannister, Targaryen, Baratheon, Stark, Tyrell, they're all just spokes on a wheel. This one's on top, then that one's on top, and on and on it spins, crushing those on the ground.

If you watch the above season seven teaser, you can deduce this Dany quote is pretty much a summation of what's happening in Westeros. Everyone's fighting to sit on the Iron Throne.

Daenerys says the quote about the wheel during a conversation with Tyrion Lannister back in season five, and it's worth pointing out the sigil teaser cuts off the last part of her quote:

I'm not going to stop the wheel, I'm going to break the wheel.

What follows? The crumbling of all the stone sigils.

What does it all mean?

Or, maybe this is supposed to symbolize the Wall coming down to signal the start of the White Walker invasion?

4. Jon Snow delivers the only new lines we've yet to hear on "Game of Thrones."

There is only one war that matters, the Great War. And it is here.

It seems fairly obvious, but this new line has to refer to the impending White Walker invasion, right?

Like, what else could Jon Snow be talking about? Also, let's not forget about the icy "Game of Thrones" poster on twitter.

5. We've seen that "Children of the Corn" spiral thing before, haven't we?

That creepy spiral pattern at the end of the teaser, which appears right before the closeup of a White Walker's eye, is actually a copy of something Jon Snow saw in season three of "Game of Thrones."

This is the dead men of the Night's Watch, killed by the White Walkers.

However, it's also really similar to Bran's vision about how the first White Walkers came to be.

So, what is this reoccurring pattern? Does it all come back to the White Walkers in the end? Well, it sure as hell looks like it.

Don't forget, you can catch the premiere of "Game of Thrones" season seven on July 16 on HBO!

Citations: All the clues from the 'Game of Thrones' Season 7 teaser you may have missed (Mashable)