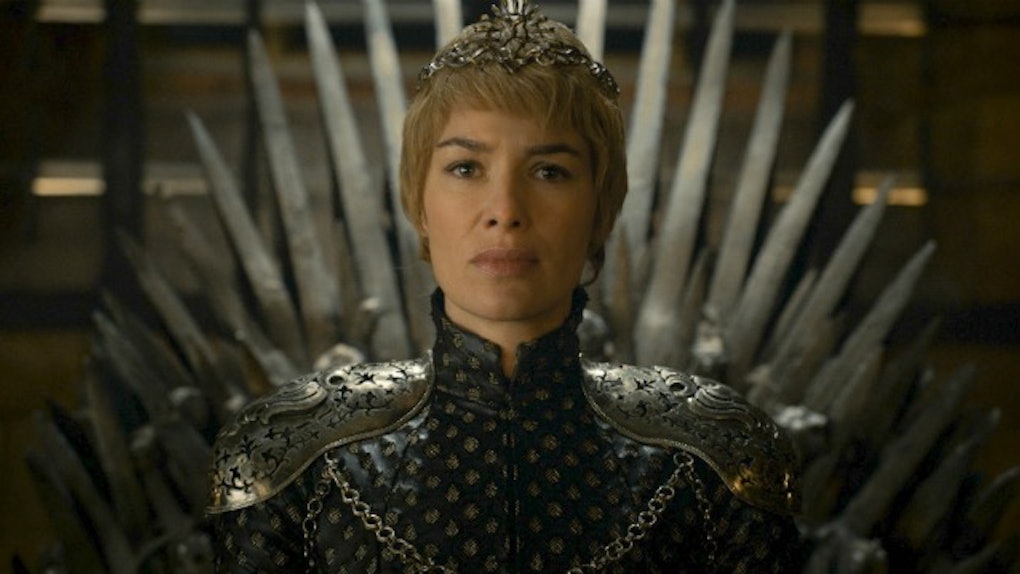 'Game Of Thrones' Teasers Have Us Thinking Cersei Will Die

Winter may be finally here, but the next season of "Game of Thrones" doesn't come out until July, which makes me hungrier for trailers and footage than one of Ramsay's dogs.

Luckily, HBO has two teasers to keep us tided over (barely).

The first one features Oathkiller, the sword made from Ned Stark's Valyrian steel sword Ice and given to Brienne by Jaime (Brienne + Jaime forever!).

The second shows Lena Headey as Cersei having makeup applied while she sits on the Iron Throne.

So, what is the significance of these two videos that only total a mere 40 seconds? Let's break it all down.

Oathkiller was a gift to Brienne by everyone's favorite one-armed villain since "The Fugitive," Jaime Lannister.

Last time we saw Jaime, he was shooting a look at Cersei, who basically used Westeros' version of an atom bomb, wildfire, on all of her enemies and a few unfortunate churchgoers.

The look told us Jaime thinks Cersei has lost her goddamn mind -- she used wildfire on civilians, something he previously killed the Mad King in order to prevent.

He also thinks she's responsible for the death of their son Tommen, who threw himself off a building because his queen turned into a pile of green ash (not a marijuana reference).

And who is friends/friends with hot tub benefits with Jaime? Brienne.

One Reddit user named B1llyW1tchDoctor thinks Brienne is going to be recruited to murder Cersei by Jaime, who can't do it himself,

Brienne does it. Jaime and Brienne make eye contact and Jaime has the power to stop her but he nods his head in approval and lets Brienne go through with it.

Now, you might think this would be at odds with the witch's prophecy foretelling Cersei's demise at the hands of her "little brother," but I think it still works.

If Jaime asks Brienne to do the deed (Jaime may be Cersei's twin, but he's technically younger), he's still responsible for her death.

Coincidence? Maybe. We'll just have to wait until July to find out.

Citations: This Is Not A Drill: 2 Game Of Thrones Teasers Are Here (Refinery29)