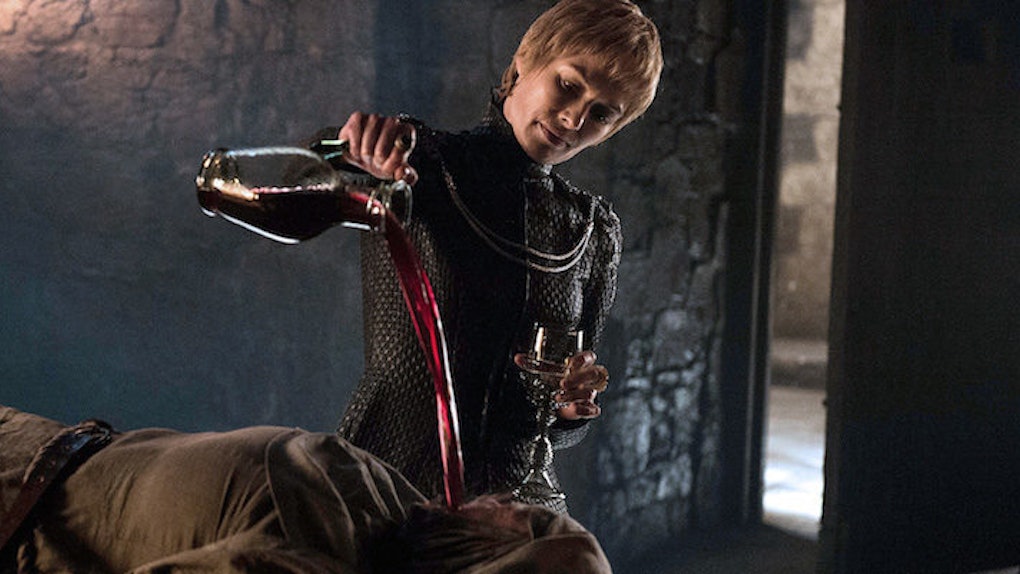 I've never seen an episode of "Game of Thrones," and I really don't know what the show is about.

Last night, I watched the "Game of Thrones" season finale, so I can no longer say the first part of my previous statement, but I still don't know what the show is about.

Here at Elite Daily, we have some die-hard "GoT" fans. In full disclosure, as an editor, I have read my fair share of articles about the show in the past few months. So I had SOME knowledge -- character names, random theories, the fact people really really want to know if some woman named Sansa is pregnant -- before being asked if I wanted to watch the finale as a complete newbie.

I decided it was time I saw what all the hype was about so I could at least say I gave it a shot. But more importantly, I wanted to investigate whether it was possible to jump into this show six seasons deep and glean any sort of meaning or entertainment from the highly anticipated finale.

I was definitely entertained, but I am more confused by this show than ever before. Like, had I been given a test at the end of the finale last night about what just happened, I would have failed without question. This is not -- I repeat, NOT -- a show you can jump into and figure it out as you go.

Because I really can't talk intelligently about what I saw, I have summed up the three most predominant thoughts -- other than "WHAT THE ACTUAL FUCK IS GOING ON?!" -- that went through my head during the 1-hour-and-12-minute airing. (Also, why did it end at 10:12???)

1. People die A LOT. So many people die. Brutally. In different ways. All the time.

I don't live under a rock, so I wasn't under the impression "Game of Thrones" was some light-hearted, comedic series. In fact, before watching, I told people I was expecting a lot of violence.

What I wasn't expecting was people straight-up slaying each other with knives, committing suicide (OUT OF NOWHERE), mutilating each other and lots of children viciously stabbing some old guy to death... all in the first 20 minutes.

I mean, I was going to keep a kill count, but when an entire room gets wiped out by a giant green fire in one fell swoop it's a little hard to keep track.

in loving memory of margaery tyrell, she was beautiful, caring and clever and didn't deserve death at all pic.twitter.com/eSp5LXpqWo — annie is broken (@nataliessdormer) June 27, 2016

"Sire the queen and everyone else burnt to a crisp I'm sorry" Tommen: pic.twitter.com/C1DNaQ1hf8 — Doc Savage (@SoloChills) June 27, 2016

2. The women are total badasses.

Once I became immune to the fact people die in pretty much every scene, I started focusing on the characters I liked the most. The women are INSANE, and I mean that in the best way possible.

I can't remember who anyone actually is because the dialogue moved quickly and the characters didn't really annunciate all that well (seriously, I needed subtitles), but each new female character who appeared on screen was more fierce (and gorgeous) than the next.

It certainly seems like the women rule the Seven Kingdoms (Westeros? The world?) and the men they chose not to kill (for the moment) kind of run around in their paths as they throw shade.

Oh, and I liked their outfits. I want to be Khaleesi for Halloween. Or Cersei. OR this woman who shut everyone up.

It probably helped I watched the finale with my co-workers, and we turned off all the lights and put the volume on high and sat in silence (rules were laid out at the beginning) like we were in a theater. However, this isn't your typical weekly Sunday night show.

The costumes, the scenery, the visual effects, ALL THE BLOOD. There was such a level of intensity in every confusing scene. And there are SO MANY CHARACTERS. Seriously. The budget for this thing must be insane.

This is the greatest episode of any show I've ever watched & it's not even over. #GameOfThrones — Joe Santagato (@JoeSantagato) June 27, 2016

Game Of Thrones Season 6 Finale concluded it as the best show ever. — Jerald Napoles (@IamJNapoles) June 27, 2016

OK, all of this brings me to the ultimate question from this little TV-watching experiment: Now that I've watched the season six finale, which my co-workers deemed the "best episode ever," do I feel like I should spend the next several months watching the series starting with season one episode one?

I tend to get attached to characters when I watch a show and based on this one episode, no one is safe. Ever. I think watching characters (SO many characters) who I didn't know die desensitized me to the whole thing.

Frankly, I'm more likely to tune in for the season seven premiere because I STILL want to know if Sansa is pregnant... just don't ask me which one Sansa is.