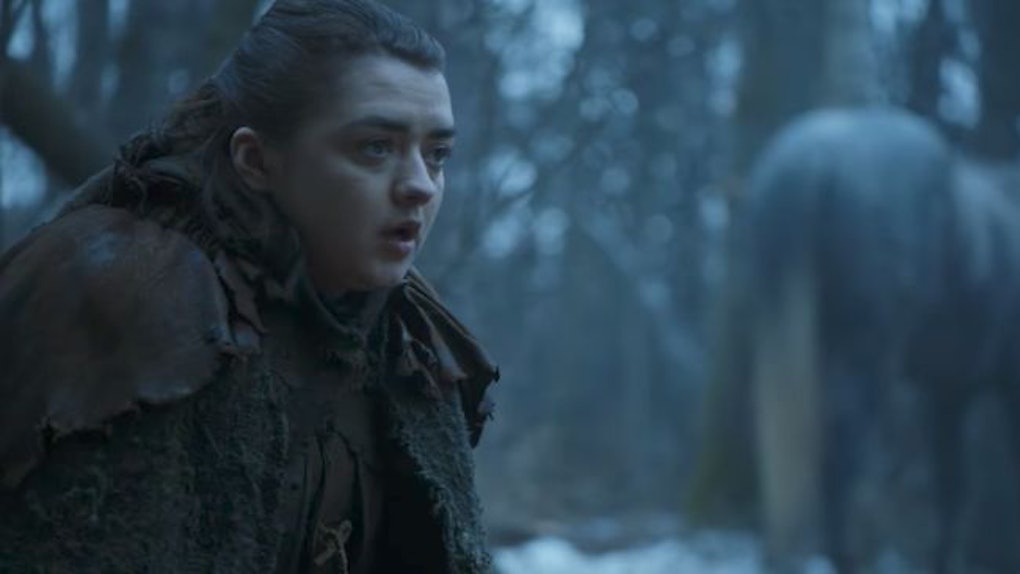 Where Is Arya's Direwolf In 'Game Of Thrones'? Nymeria May Return

This post contains spoilers from "Game Of Thrones" Season 7, Episode 1 and possibly Episode 2.

Game of Thrones Season 7 has officially begun, so I have just one question for you all: Shall we begin?

(Quick moment of silence to revel in the awesomeness that is Daenerys Targaryen.)

Sunday's night premiere ended on that loaded question from Dany, and was quickly followed by an action-packed teaser for what's to come in next week's Episode 2, "Stormborn."

It's only a 20-second trailer, but there's a lot packed into those seconds. Like did you guys see that cut of a wolf barking to Arya's face? What was that about?

Well, some fans are thinking it might mean Arya will finally, after six seasons, be reunited with her direwolf from Season 1, Nymeria.

Now, I know there's been a lot of heartbreaking Game of Thrones goodbyes, but I don't think I've ever gotten over little Arya tearfully sending her dog away after Nymeria saved her from Joffrey.

Honestly, this is so much worse than the Red Wedding.

So let's taking a closer look at that moment in the trailer.

The wolf featured in the trailer is not Nymeria, but a just regular, rather unfriendly-looking wolf.

Then we cut to Arya's face looking... scared? Shocked? Or maybe... happy to see an old friend?

It's hard to say. But there are a couple of other factors leading fans to think a Nymeria reunion is coming.

First, sound designer Paula Fairfield said in an interview with Time that Season 7 will feature "a beautiful wolf scene." That definitely sounds it could be a Nymeria reunion.

And there's also the fact that in George R.R. Martin's book series, locals in the Riverlands (which is where Arya is now) saw a huge wolf leading a pack of other wolves. So it doesn't seem like a stretch to assume this unfriendly wolf in the trailer might be a part of Nymeria's new wolf pack.

Look, you guys at HBO can keep the incest, murder, and rape. I just want to see a girl reunite with her puppy dog.