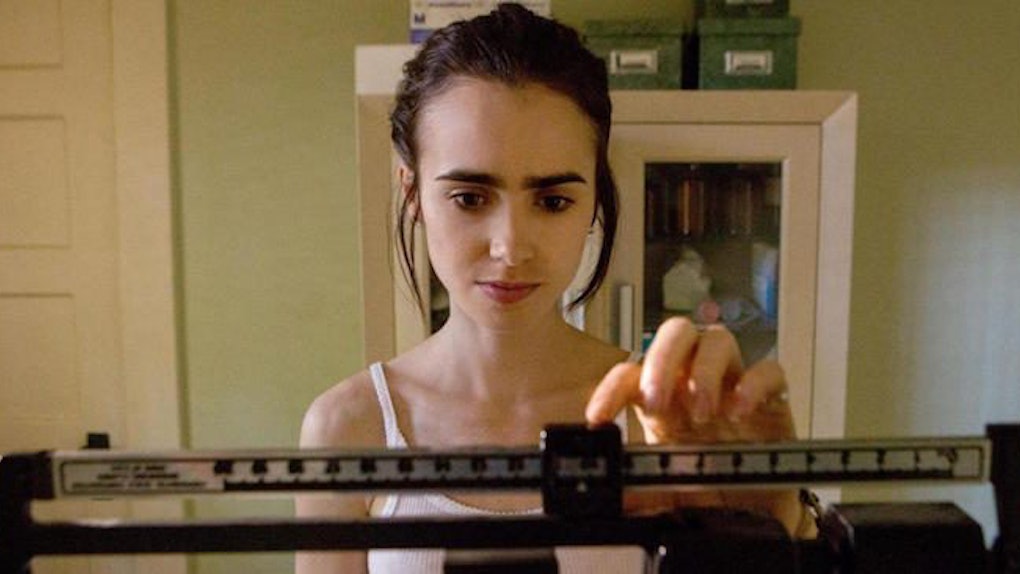 Netflix’s ‘To The Bone’ Portrays Eating Disorders In A Realistic Way, Despite What Critics Are Saying

The reviews are in after Netflix's original film To the Bone debuted last weekend and, unsurprisingly, audiences have mixed reactions.

I'd been waiting for the film to release since I first saw the trailer, so when July 14 rolled around, I made myself a large, steaming cup of tea and settled into the comfort of my couch.

Fast-forward two hours later, and tears were streaming down my face as the final scene faded to black and the movie's raw title contrasted in bright, bold lettering against a shadowy, dark background.

Speechless and emotional, I found To the Bone, written and produced by Marti Noxon, to be an accurate depiction of how I feel living life with an eating disorder.

And I certainly wasn't the only one who felt a genuine connection to the film. Viewers took to Twitter immediately after the film to give their stamps of approval:

However, at the same time, plenty of viewers expressed their qualms, concerned that the film may be too triggering, or too romanticized:

Of course, controversy surrounding the film was going to be inevitable. Sensitive subject matters are hard to talk about, read about, and watch in feature films, but they spark important conversations and bring awareness to the hard issues, such as an eating disorder in its rawest form.

While I, too, found a few scenes to be a little too glamorizing (for example, the museum scene where there's suddenly rain and music and slow dancing), I found the persona of Ellen (played by Lily Collins) to be quite relatable. Films that zero in on mental illness rarely, if ever, go uncriticized. (For example, Netflix's Thirteen Reasons Why series received a ton of backlash for some of its graphic content related to suicide and sexual assault.)

There were certainly aspects of To the Bone I'd raised an eyebrow at too, such as Ellen's overly dramatic family situation, but I personally think there were many instances throughout Noxon's drama that represented the truth about living with an eating disorder in a stunningly accurate way.

When someone is living with an eating disorder, they're still living.

In the movie, Ellen suffers from and is being treated for a severe case of anorexia, but she's also dealing with an elusive father figure who blatantly ignores her existence, an overbearing stepmother, romantic feelings for a fellow inpatient named Luke, and living with the fact that her artwork was the root cause of a stranger's decision to commit suicide.

My own personal struggle with anorexia nervosa hit its peak around the end of my junior year of college. I was bombarded with career-path decisions, personal relationships that were proving to be self-destructive, and the pressure to be pretty, to be thin, to be the linear definition of perfect I'd come to endure through hours spent on Tumblr's pro-ana pages. (The exact images discussed in the film were once my own motivators.)

By senior year, I was struggling to decide what (if anything) to eat for breakfast out of fear of consuming too many carbs, but on top of that, my graduation loomed, as did anxieties about an upcoming internship in Manhattan, as well as the start of a new relationship with a man I'm now happy to call my husband.

Ellen's eating disorder is at the forefront of the big picture, but the struggles outside of her body image are what offer viewers a bird's-eye view of an actual disorder affects you — not just on the inside, but also on the outside, too. Living with an eating disorder, in particular, influences every piece of your day, but it's still part of you; it doesn't define you as a whole person.

Sometimes, it's not about food at all, but a sense of control when life becomes too hectic.

To this day, recovery is a choice I made.

During the film, Ellen was reminded of this choice by her doctor and birth mother, and we see her in a reflective state toward the end of the movie, grappling over whether or not she genuinely wanted to get better or let herself go.

Getting better is a choice I make every day, and a choice that every person living with an eating disorder must choose for themselves.

While my body image dysmorphia has not completely subsided (there's still the occasional morning where I'll wake up and avoid the mirror at all costs, second-guessing every bite I take), the restriction and paranoia sparks when something outside the body causes me stress. But it's not easy. And it's certainly not automatic.

Bonnie Brennan, a certified eating disorder specialist and senior clinical director of Adult Services at Eating Recovery Center in Denver, tells Elite Daily how To the Bone sheds an important light on why someone may develop or use their food-centric illness as a coping mechanism for other struggles in life.

We see Ellen/Eli body-checking after difficult interactions with her family. This behavior can be seen as a way she may be attempting to soothe herself or feel safe. While it is certainly distorted, the body-checking becomes her way to get relief and comfort herself with her anorexia. Also, we see how an eating disorder may be maintained by the role it plays in relationships. The family in this movie is complicated and chaotic, and the doctor explores with Ellen/Eli how her anorexia may scare others away and keep them at a distance, perhaps as a protective factor, due to the abandonment she may have felt from parental relationships.

Of course, there are many instances where eating disorders stem from the insatiable need to look a certain way, to fit society's distorted definition of "beautiful," but more often than not, looks only play a small role in the grand scheme of things.

The film shows just how much relationships matter to people struggling with eating disorders.

I could not have come so far in my recovery had it not been for the unyielding support of my husband and family.

Unfortunately, for some, poor family ties can actually lead to the onset of a physical illness, or they can be extremely detrimental to dealing with or addressing a mental health issue.

The family in this movie is complicated and chaotic and the doctor explores with Ellen/Eli how her anorexia may scare others away and keep them at a distance, perhaps as a protective factor, due to the abandonment she may have felt from parental relationships.  An aspect to be explored in treatment is to assess and be curious about the functions of the illness and what may serve to maintain it. If we don't address those issues, the risk of relapse is higher.

The film highlights all kinds of relationships, both strong and weak, in Ellen's family, and while it's clear that the absence of Ellen's father and the disconnect with her biological mother were both impactful (you can tell by Ellen's tense body language at the mention of her father and the way any attention from her biological mother is welcomingly received), there's also a distinctly positive connection between Ellen and her sister and, eventually, between Ellen and her stepmother.

As much as these relationships can play a role in the development of an eating disorder, they arguably have an even stronger tie to recovery.

If you watch carefully, you'll notice there are certain characters Ellen feels at ease around. She finds light in her struggle by making jokes and sarcastic remarks with her sister, and her body relaxes and her sense of humor shines through around Luke.

The film separates help versus hazard in these relationships by developing characters who break Ellen down, as well as those who build her back up. Brennan says:

We see the stepmother desperately attempting to connect and support, even though she gets it wrong, at least she is showing up for the hard stuff. The sister's character does a good job of showing how one does not have to have all the answers or be an expert on how to solve the problem in order to show care, concern, and support.

Initially, family members will show feelings of "despair, denial, anger, and blaming, courage and loving, patient support," says Brennan, and it's important to factor these emotions into the recovery process.

Still, when all is said and done, recovery ultimately depends on the person.

Toward the end of junior year, my therapist suggested I explore in-patient programs in pursuit of recovery, but knowing myself and the types of treatments available in those programs, I made a personal decision to work through my eating disorder through weekly therapy sessions, exercise, and by taking baby steps forward with my life.

Ellen chose her own path of recovery as well. During the opening scene, you see her in a recovery program, sitting at an art table, drawing what she feels, and listening to another patients' struggles. Eventually, she returns home, back to the drawing board.

Recovery from an eating disorder is as individual as the illness itself, and while some viewers may have interpreted Dr. Beckham's no-bullsh*t, straight-shooter, artistic treatments as "unorthodox," many still see the benefits that could come from this approach:

Some patients find their voice through art therapy or yoga and movement group. Others are more conversation-oriented. It is important to see treatment as an opportunity, as a way to increase one's psychological flexibility and challenge their mind's own notion of what they initially 'think' is helpful.

In the end, how this film is viewed will ultimately depend on the person watching it.

As someone who has struggled with eating disorders and body dysmorphia from a young age, whose family was nothing but supportive in my recovery, and who hasn't relapsed in nearly three years, I found the film to be informative, raw, and full of hope for those who continue to suffer.

If you or someone you care about is struggling with an eating disorder or disordered eating behaviors, please know help is available, recovery is definitely possible, and it's never too late to start your recovery journey.

You can contact Eating Recovery Center at eatingrecovery.com, or call 1-877-711-1690 to talk to a Master's Level Clinician.