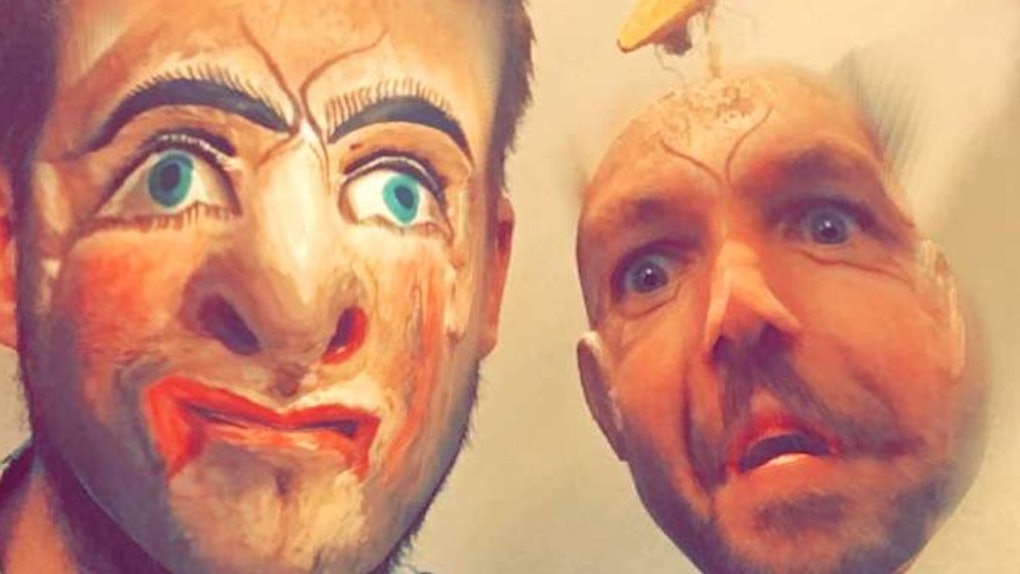 I am a huge fan of Calvin Harris. Every morning, I wake up and religiously watch his Snapchats before I watch anyone else's (even the guy I have a crush on).

Lately, though, my boy Cal has been posting incredibly cryptic, “motivational” speeches. (“Motivational” is in air quotes because these speeches are anything BUT motivational.) They really just make me sad for him and absolutely livid at Taylor because she definitely broke his heart to the point of no return.

Friends, the man has clearly lost it. Cryptic Calvin has gone INSANE.

Here are my interpretations of his cryptic Snapchats.

First he said "go all the way" and now, he's saying "go away." To himself.

Last night, emotionally unstable Calvin posted THIS photo of himself, with an arrow pointing to his head:

CALVIN. WHAT ARE YOU SAYING?!

OK, first, let's get some context. Calvin is in Cabo right now and it looks like he's there for work, not for play-play. He posted a bunch of other snaps of him and his buddies shooting music videos with beautiful ethnic girls, like this one:

(She kind of looks like me, doesn't she? I TOLD YOU I'm his type). But I digress.

The smiley faces here are especially cryptic. They conflict with the "go away" and they make him look like he's a sociopath who secretly gets off plotting his next kill.

But "go away?" Cal, do you hate yourself? Are you trying to tell us that despite the fact that you are a tall, blond-haired, blue/green-eyed hunk of a man who gets to jet to Cabo for work and party with beautiful women that you don't want to hang out with yourself? Did Taylor really mess you up that much?

As you can imagine, I'm very confused. It looks like he's trying to love himself. He's seemingly having a grand ol' time with friends, which you can clearly see with this beautifully artistic face-swap:

I hope that if he does hate himself right now, then it's because of all the Taylor drama and not because he feels less accomplished than her when it comes to work. Your music is great and I'd hate to see you let unfortunate events of your personal life affect the way you feel about your art.

Side note: The snap that I sent to Calvin saying "Calvin, I'm here for you" is still pending:

Apparently, celebrities have to APPROVE snaps sent to them from people who aren't their friends. Ugh. How rude.