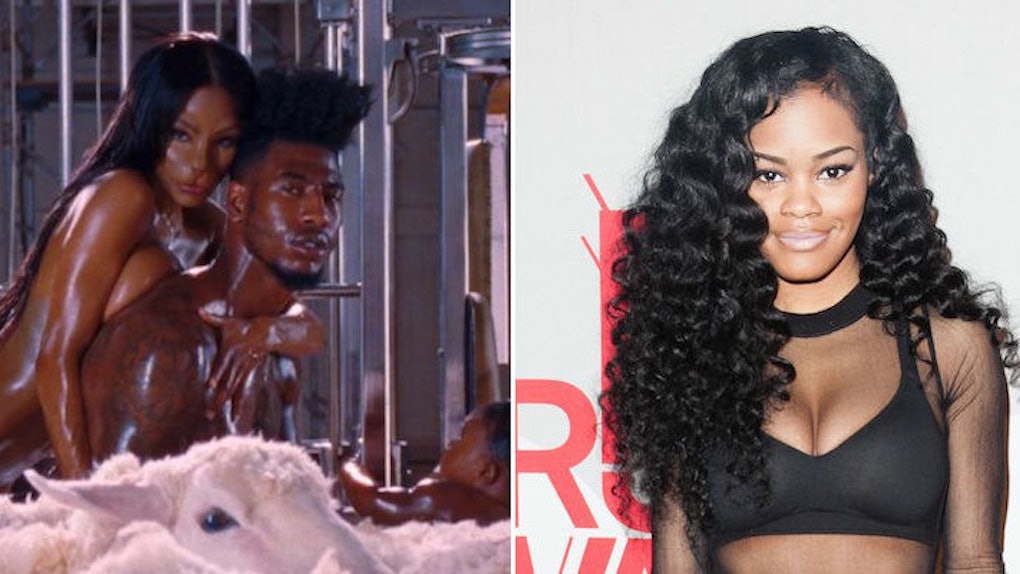 One of the most talked about moments from this year's VMAs was Kanye West's new video for "Fade," which featured a sweaty, half-naked Teyana Taylor.

Taylor is an up-and-coming singer herself. Thanks to Kanye, this video is a huge step in her career.

As one would assume, working with Kanye is a little different than working with anyone else in the industry. I mean, the cat face? The sheep? Does anyone know what it means?

Taylor told Vogue working with Kanye was a dream for her, but it was also a little crazy. She said,

Yeah, he was just like, 'I'm going to put you in this cat face. It's going to be chic.' At the same time, being an actor, I love doing stuff like that—to be able to get dressed up and get out of my comfort zone. I was very excited to do something different and artistic, but since we shot backwards, at first, I didn't know what was going on. I thought, 'This crazy mother-effer. He's got 15 sheep in this gym right now, with poop all over the place.'

Yikes. I wonder who had to clean up all the poop.

Those few seconds featuring Taylor as a cat-lady, her fiance, Cleveland Cavaliers shooting guard Iman Shumpert and her 8-month-old baby, Junie, hanging out with 15 sheep took HOURS to set up. Taylor explained,

We filmed that cat scene first. We didn't shoot the video in order. I was in three hours of makeup and prosthetics to get that thing on my face.

It looked almost too real.

Another crazy thing is Taylor didn't even see the video until the rest of the world saw it at the VMAs after Kanye's awkward speech.

We hadn't even seen the video before last night. So when I heard that the video was going to be premiering at the VMAs, I was like 'Oh my god, it's tonight! Do I look good? Do I look great? Is he going to change his mind and not premiere it?' [...] I thought he might just wind up doing something completely different because you just never know with Kanye.

I guess you really never know with Kanye. He's a wild card for sure.

We can't wait to see what's next for Teyana Taylor, especially since her toned body and cat face will never fade from our memories. Get it?!

Citations: Teyana Taylor on Her VMAs Star Moment and Turning Into a Cat for Kanye (Vogue)