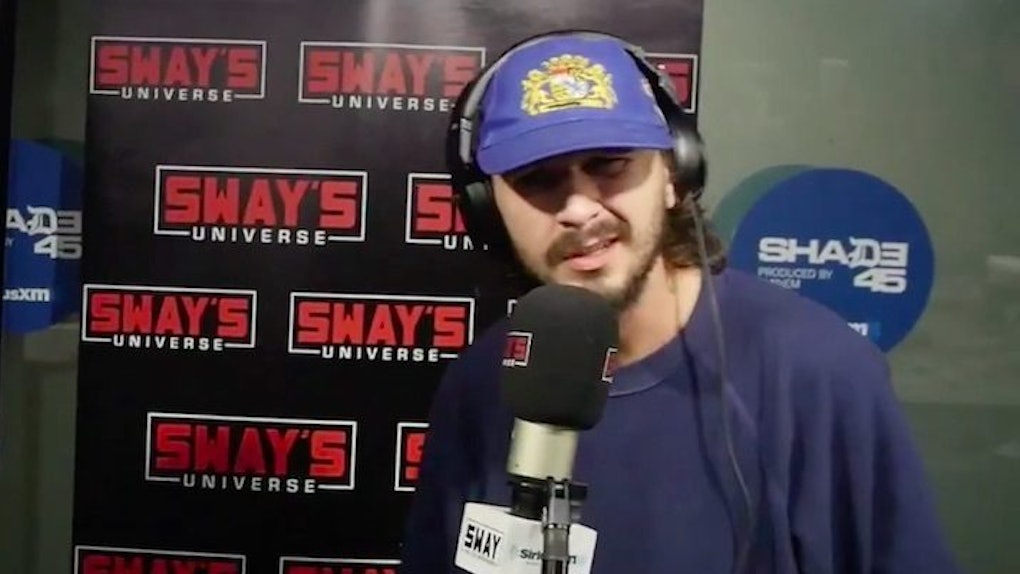 This year can't get any more bizarre than it has already, so why not throw in Shia LaBeouf being good at rapping?

But guys, Shia LaBeouf is really, really good at rapping. And anyone who watches this video won't be able to deny it.

On Friday, Shia was on "Sway in the Morning" on SiriusXM. Sway asked Shia who in hip-hop he looked up to. Shia listed off some classics: "'Pac, Biggie, Missy."

(Of course, we already know how much Shia loves Missy Elliot thanks to his knee tattoos of her.)

This is all normal white boy behavior so far. Lots of white boys love hip-hop. But not many of them can actually do hip-hop.

So when Sway said Shia LaBeouf was about to freestyle for five full minutes (aka "Five Fingers of Death"), I cringed. When the beat started, I hid my face. I thought to myself,

Well, this is going to be a beautiful trainwreck.

But then... it wasn't. It wasn't a trainwreck at all. It was actually pretty good. Really good, actually.

Like, it wasn't perfect, but this is the kind of freestyle I might expect from a professional rapper. He rhymed and he made sense and he made it all up on the spot.

I highly suggest you give this a listen yourself, but here is a small excerpt:

Missy on my two knees, dude, please stop asking about tats like some groupies.

Even Sway was impressed. He brought out the shades of respect.