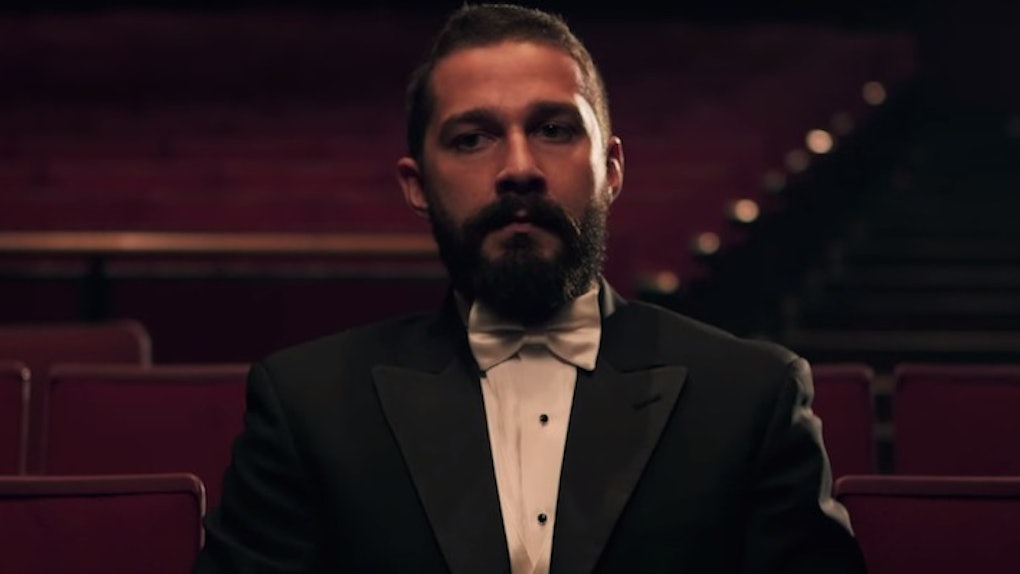 Today I Basically Went On A Date With Shia LaBeouf And You Can, Too

Earlier today, a press release was sent out announcing Shia LaBeouf would spend the next three days in a movie theater watching his own movies. All of them. Every. Single. One.

At noon on November 10, #ALLMYMOVIES by LaBeouf, Rönkkö & Turner kicked off at the Angelika Film Center.

The "performance" is open to the public, so people can join him to watch for free.

I had so many questions for Shia. Is he planning on staying awake for three days straight?

Will he have food? Is he allowed to go to the bathroom?

I figured the only way to get to the bottom of this was to see for myself. I quickly packed up my belongings and headed to the theater to see my long-lost "Even Stevens" boy crush in person, with my own eyeballs.

The theater, located at 18 W. Houston Street in NYC, happened to only be 10 minutes away from my office.

about to wander the streets of NYC to find Shia LaBeouf in some movie theatre wish me luck if i die play "Even Stevens" at my funeral — Katie Corvino (@kTc0rvin0) November 10, 2015

As soon as I entered, I was greeted with a sign promoting "#ALLMYMOVIES" and was told to go straight through the doors.

At first, I was really nervous. What if this was all a prank? Was I getting punked? Was Shia going to put a brown bag over my head and feature me in his next art performance? IDK. I kept walking.

A theater employee asked me to show ID because you have to be 18 years of age to enter the screening. After he checked my age and bags, I was immediately allowed in.

When I opened the doors, the movie "Fury" had just started playing. The room was pretty damn small, so things already felt intimate. I quickly located Shia and my heart dropped. There he was, looking handsome as ever, munching on some popcorn and watching his film. He was sitting at the end of the row, halfway down, with an empty seat next to him.

I found a spot two rows directly behind him. Aka, I spent the next couple of hours staring at the back of his beautiful head. Was everyone being as creepy as I was? I really don't know. It was pretty dark in there.

My first question was answered. Yes, Shia did have popcorn. He also had a soda next to him that he sipped pretty frequently. The boy was thirsty.

If I'm being honest, I didn't really watch most of the movie. I was too intrigued with what the hell was happening in the theater.

It filled up shortly after I arrived, so I guess I got there at the perfect time. People would walk in, not even look at him, and sit down. LIKE, GUYS, DO YOU REALIZE WE'RE WATCHING SHIA LABEOUF MOVIES WITH SHIA LABEOUF? This is huge. No one sat next to him, though. No one was feeling that bold.

In front of Shia was a huge, black camera. The "performance" was being live streamed, so people could watch him watch his films without actually going. Mom and Dad, I hope you saw your little girl all grown up sitting behind her hero. That girl in the glasses two rows back, yeah, that was me.

Eventually, you could tell Shia was starting to get a little uncomfortable. At one point, he leaned down and I couldn't see him at all. I think he was doing some stretches. I mean, can you blame him? He's been sitting in that seat for hours at this point. What an artist.

I was curious to see what would happen when the credits rolled. Would he just sit there? Would we clap? Would he be down for a Q&A? Doesn't he have to pee?!?!!?! It was approaching the end, so I eagerly waited.

Literally the moment the credits rolled, Shia sprinted out of his seat and toward the back. Everyone in the theater was probably like, "WTF, where you going pal?!" because that's what I was thinking. So obviously, I followed him out.

He wasn't anywhere to be seen, so I assumed potty break. I pretended to go to the bathroom, too, so I didn't look like a creeper waiting for him in the hallway. Also, I thought I wouldn't be allowed to just stand there and wait, so I just went into the bathroom and pretended to wash my hands a few times. You know, just acting. After a few minutes (boys pee fast) I went back into the main hallway and saw a few other people standing there.

Shortly enough, Shia came out of the bathroom and I saw him, in the light, right there in front of me. It was a truly beautiful moment. His childhood friend was there (I think) because they hugged and stuff. But Shia didn't say anything; he just walked back into the theater and sat down again. No one gets in the way of the man and his films.

The next movie began, and the theater refilled. After a while, I decided to leave. I could successfully tell my grandkids one day that I went on a date with Shia LaBeouf, and that was enough for me.

Lol like am I on a movie date with Shia or what pic.twitter.com/ot7hIUNGzQ — Katie Corvino (@kTc0rvin0) November 10, 2015

As I exited the theater, the line was out the doors. I encourage you all to experience the magic of sitting in a movie theater watching Shia LaBeouf watch movies of himself. It's a real treat, and I feel blessed to have experienced it in person.