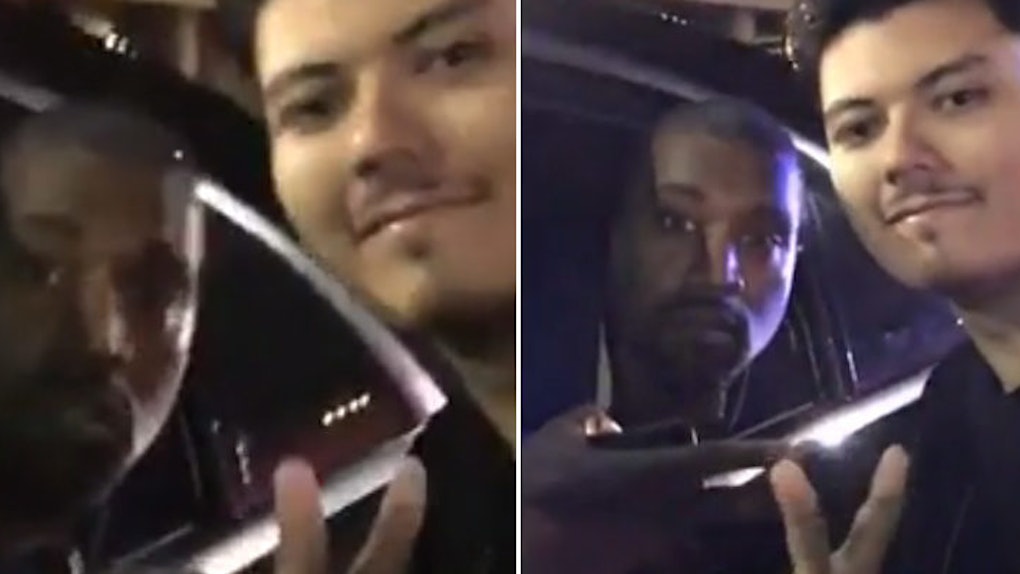 Video Footage Of Kanye West Before His Hospitalization

Something is clearly going on with Kanye West, and it's not good.

As far as we know, the below footage is the last video taken of Kanye West before his hospitalization.

It was taken by a fan outside his Sacramento concert after the 39-year-old music icon played three songs, went on a 15-minute rant -- where he weirdly called out Jay Z, Beyoncé and Hillary Clinton -- and ultimately walked off stage, ending the concert completely.

To put it lightly, Kanye does not look great in the video selfie.

When Kayne West ends the show after 3 songs in Sacramento and allows me to take a selfie in the middle of the intersection w/ him. pic.twitter.com/14us9LkcLe — CioBlue (@PatrickSTAR489) November 20, 2016

The fan in the video, Patrick Star, spoke to The Sun after the run-in, saying,

When the show ended I quickly ran out to record him leaving. I noticed his window was half way down, so I called his name and asked for a pic and he invited me over. But the [traffic] light turned green and he yelled at the driver to stop. And that was about it.

Shortly after the video was taken, Kanye was admitted to the Ronald Reagan UCLA Medical Center for a psych evaluation.

This all follows a rough few months for West, who has clearly been spiraling since Kim Kardashian was held at gunpoint during a robbery while attending Paris Fashion Week.

Before rushing back to LA to be with Kanye, Kim, who hasn't updated her social media accounts since the robbery, was reportedly supposed to make her first public appearance in months at Monday's Angel Ball.

Hours before being admitted to the hospital, Kanye canceled the remaining dates on his Saint Pablo Tour.

Kris Jenner said Kanye canceled the tour because he was "tired."

Our thoughts and prayers are with Kanye and his family during this tremendously stressful time.