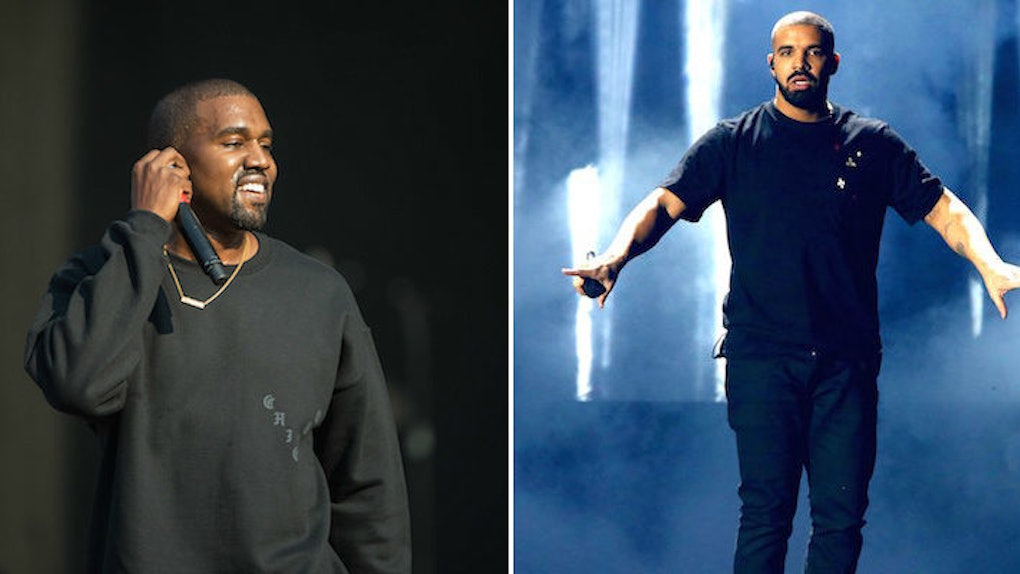 Evidence Kanye West And Drake Are Making A Joint Album

This Drake-Kanye collab better actually be happening. Enough of this musical blue-ball tease thing these two have going on. GIVE US THE TRACKS!

For the past few months, there's been speculation about a potential collaboration between Kanye and Drake, two of the best one-word-named rappers in the game.

Kanye's been a frequent guest at Drake concerts, and the two have been hinting they're working together on something for a while now.

Remember this little snippet from OVO Fest in Toronto?

The two even shared vague billboard space (with logos from their respective labels), referencing the Kardashian's home turf. This could also be a clue about the new album?

Today we got more evidence in the case of the potential joint album, and it came in the form of a comment on an Instagram upload.

Drake posted this pic to his account, and it has everyone buzzing... again.

What's different is, this time, famous behind-the-scenes-music-guy Scooter Braun made a comment that implies they've already started working on tracks.

Could this be the final clue we've been waiting for?

Drake and Kanye West could be dropping a project soon. Check out @scooterbraun in the comments. There Goes The Neighborhood.pic.twitter.com/ggVC4kj0Ac — Drake Direct (@DrakeDirect_) November 7, 2016

I would like to point out the insanity of a potential Drake-Kanye album is magnified 10-fold when you consider Drake might also be working on new music with Taylor Swift.

Without getting too ahead of myself, we could very much see a triple-collab album

That is, of course, if Drake and Taylor are actually working on something and not just potentially hooking up.

This could all be an elaborate ploy by Taylor to spend time with Drake, kind of like going over to the starting QB of your highschool's team to help him out with homework in the chance he asks you out to prom over Lindsey Callesetti (WHO WE ALL KNOW HOOKED UP WITH WARNER BREEMAN AT MICHAEL SCHWARTZBAUM'S HALLOWEEN PARTY).