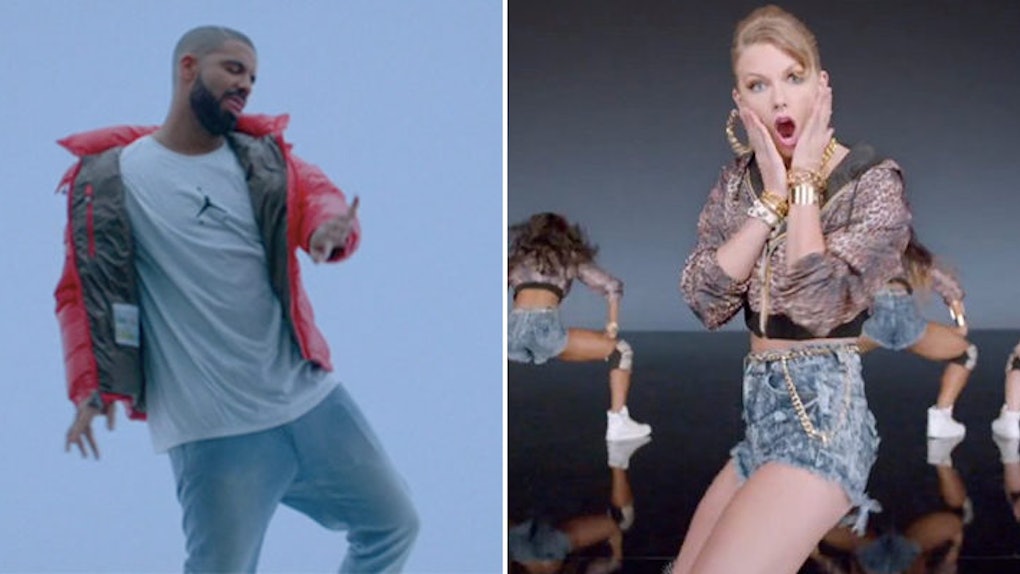 Taylor Swift And Drake Might Be Making Music Together

Either Drake and Taylor Swift are dating or they're collaborating on some music -- either way, 2016 has officially gone too far.

I don't know what it is about this year, but it has sucked all the dongs in Delaware.

Celebrity deaths, riots, “This Is Us” and an election that won't goddamn end have turned the past few months into an intolerable suck hole.

Just when you thought it couldn't get any worse, late-October/early-November came along and loudly proclaimed,

Hey, Earth! I'm going to make Taylor Swift and Drake go out or make new music. Why? Because fuck you, that's why. Enjoy your scarves and PSL Starbucks orders, you dumb buttholes!

*late-October/early-November flies away on one of those evil old-timey zeppelins.*

Last week, rumors started flying around saying Taylor and Drake were dating after Swift hightailed it from a concert in Austin all the way back to LA for his birthday party. There, inside sources claim Drake was flirting HOOOORD with Taylor during the party.

The internet puked in unison at the thought of the two potentially becoming a couple.

While we don't know whether or not they are actually dating, we can now confirm we also don't 100 percent know if they're not working on new music together.

According to a source from Page Six,

They've been in the studio collaborating.

I'll let this tweet I found sum it up:

Seriously, Taylor and Drake making music together is the only thing worse than the possibility of them dating. I'd rather the two of them work together on a nuclear bomb.

When you're dating, you can keep your relationship on the DL. When you make music together, however, you subject everyone else on the planet to listen to what you've put together.

(Shut up, guy in the back of the room who just yelled, "You don't HAVE to listen to it!!!!" It's a Drake and Taylor Swift collab project -- OF COURSE WE'RE ALL GOING TO GODDAMN LISTEN TO IT.)

To ease the pain a little bit, supposedly Drake was flirting with a lot of people at his party. So like, maybe it's not all that bad? I don't know, I'm trying to see some sort of silver lining here.

Doom is upon us.