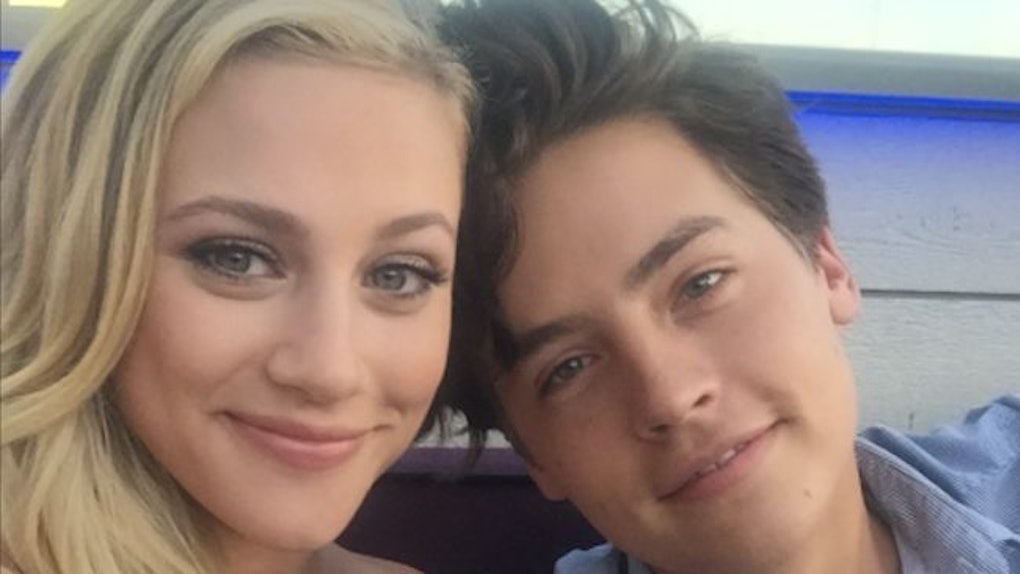 How Long Have Lili Reinhart & Cole Sprouse Been Dating? The 'Riverdale' Stars Are Sneaky

Calling all fans of celebrity news: Betty and Jughead from Riverdale, aka Lili Reinhardt and Cole Sprouse, are dating in real life. If this is the most exciting thing you've thought about all day, then I have one thing to say to you: Me too. Granted, this isn't really *breaking* news since we've known about it for quite some time, it's still a cute and frustrating storyline to follow for two reasons: 1) They're adorable together and we love both of them, and 2) They are so mother-effin' secretive that we know very little about their relationship and I, for one, am nosey AF and want to know as much as possible about sh*t that isn't my business.

That being said, now that we have established my insatiable need to put my nose into other people's relationships, there is a lingering question I (as I'm sure many of you do) have about Lili and Cole: When did Bughead officially become an item? Most of the dating rumors surrounding these two started back in March, but, as far as I can tell from the extensive research I've done, these two could have been dating as early as last summer. You see, Riverdale premiered in January of this year, which means that the actors would have been filming throughout the summer and early fall of last year. In August of last summer, Lili uploaded a pic to her Instagram of her and Cole and gave our Jughead a birthday shoutout.

Of course, this could have been a purely platonic birthday shoutout, since Lili gives them to her costars often on Insta and since she used the word "pal" in the caption, but what's important is this is the first solo pic of these two to hit either of their social platforms. Though we've seen plenty of very adorable pictures of these two sly foxes since then, this one is particularly dubious to me. Here we are, almost a full year since this pic was posted, and we're still playing cat and mouse with these two. And, given Cole's stance on publicizing his personal relationships, it doesn't seem like the game will end anytime soon. He recently told Elle,

Frustrating, I know. JUST TELL US, JUGHEAD. Let us love you for crying out loud. I guess all we can do now is wait and hope that Lili uploads another ~adorable~ picture of these two for Cole's birthday in a few days, perhaps this time she'll use "boyfriend" instead of "pal."