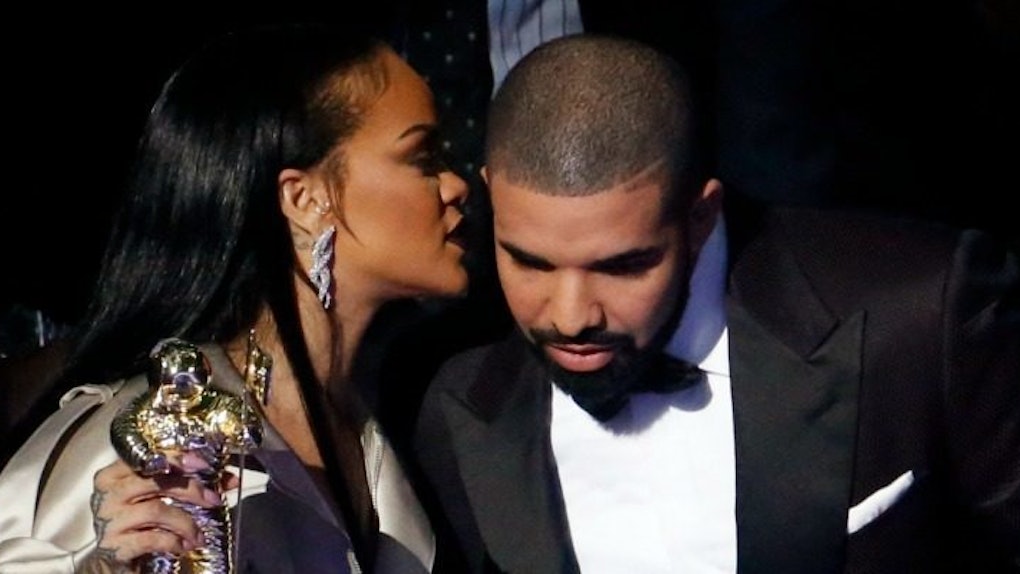 Drake Is So Hype About Rihanna, He Sank A Half-Court Shot Lying On His Back

Ever since Drake and Rihanna kissed at Sunday night's MTV VMAs, the dating rumors about the superstar artists have been spreading like wildfire.

Wednesday night, during the Miami performance of his Summer Sixteen Tour, Drake surprised fans by bringing RiRi up on stage.

As soon as her performance was finished, Rihanna kissed Drake, gave him a hug and diped off stage as quickly as she appeared.

In addition to their embrace Wednesday night, Drake and Rihanna appeared to be more than just friends when they chilled at a Miami club on Tuesday.

So, when's the wedding, right? I mean, obviously these two aren't just dating, they're in love.

They say love can make you feel things you've never felt before and give you almost super-human strength, which is the only explanation I can come up with for how Drake made this half-court shot while lying on his back.

It appears Drake made the shot while hanging out at the Miami Heat training facility, and I can almost guarantee Rihanna was on his mind when he threw that ball up.

According to the above tweet from the Miami Heat, Drake made the shot on his first attempt, and he clearly has his new relationship with Rihanna to thank.

Citations: Drake Makes Half-Court Shot While On His Back (TheBigLead)