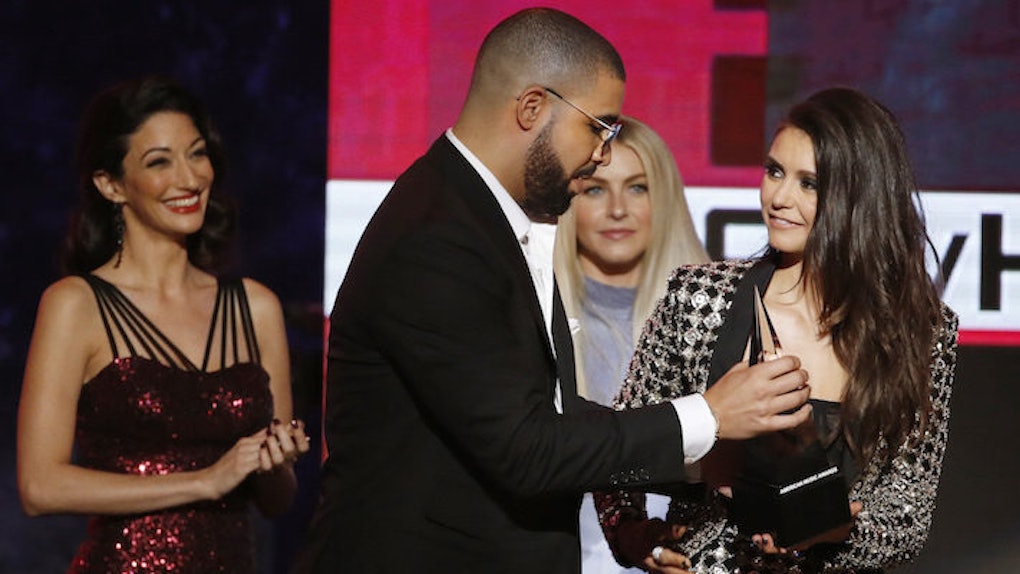 Drake And Nina Dobrev Bond Over 'Degrassi' At AMAs

Drake just proved himself to be more of a sweetheart than we've ever imagined by reminiscing about his "Degrassi" days with Nina Dobrev at the American Music Awards.

Dobrev -- looking gorgeous as per usual -- presented the rapper with the Hip-Hop/Rap Album of the Year award, and we couldn't help but swoon at the win.

To make the moment even sweeter (I didn't think it'd be possible), he acknowledged the fact he and Dobrev used to be co-stars on "Degrassi."

You know... back in the days before he became hip-hop's favorite heartthrob. Jimmy Brooks, who?

After he was handed the award, he told the AMA crowd about the "Degrassi" past that he and Debrov share, and then continued to shower her with compliments by congratulating her on how well she's doing.

Talk about a freakin' Kodak moment.

In case you missed out on Drake and Nina's glory days on "Degrassi," let me refresh your memory. Get ready for an insane blast from the past.

LOOK AT THESE CUTIES.

How is it even possible to be that adorable?! Even back then, Drake's smile could melt hearts.

In fact, I'm surprised Nina Dobrev hasn't fallen in love with the guy... I mean, he is single now.

It's fine, though, Taylor Swift's already on top of it.

Regardless, the moment they shared on stage just made us fall in love with Drake all over again, and we're thrilled his hard work in the music biz is being rewarded.

I don't think there's anyone else he'd rather have present him an award than someone he's known for years and years. Their dynamic was perfect.

And now, I'm feeling more nostalgic than ever. I'm going to definitely have to brush up on my "Degrassi" after this to relive the moment a few more times.