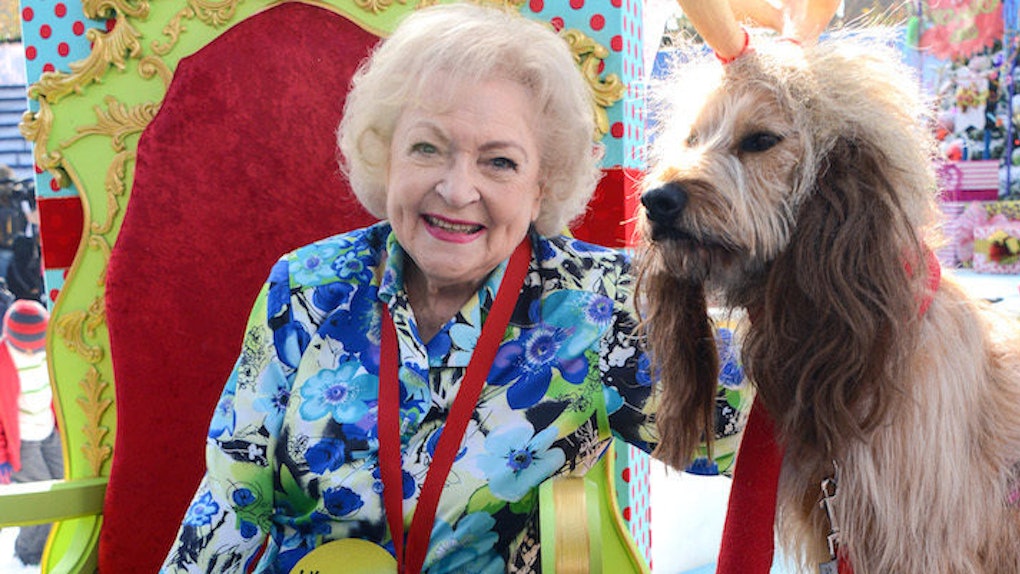 Guy Sets Up GoFundMe To Save Betty White From 2016

Millennials are staring 2016 straight in the eye and loudly proclaiming, "WE WILL NOT GO QUIETLY INTO THE NIGHT."

This year ran a full on train with knives for wheels over all our childhoods.

George Michael, Prince, Alan Rickman, Gene Wilder, Carrie Fisher, Crumbs Bake Shop, Elite Daily entertainment writer Taylor Ortega's cat, David Bowie and more were all snuffed out by 2016 in a year that we will always remember as THE SHITTIEST of years.

(I'm purposefully not even going to begin to acknowledge Trump.)

There is one person who is fighting back. His name is Demetrios Hrysikos and he has made his goal from now until the end of 2016 to preserve one shiny bastion of hope and joy that we have left.

Demetrios Hrysikos has declared himself the guardian of Betty White.

Through a campaign set up on GoFundMe, Hrysikos is planning on protecting Betty until 2017 saves us all from the ashes of this year.

Help 2016 catch these hands if it goes anywhere near Betty White! If she's okay with it I will fly to where ever Betty White is and keep her safe till Jan 1 , 2017. Now, assuming she doesn't want a strange Greek standing gaurd outside her door all monies will be donated to the Spartanburg little theater to help craft new stars of stage and screen to carry mantle of the legends that have left is this year.

I had no idea this would go so far but I'm happy it did. The idea came to me after news of Carrie fishers passing to try and put a smile back on some people faces and do some good! Other than liking to support our local arts and having a friend who works at the little theater I don't have any connection to it, I just thought it would be a good place for any money made to go. 2016 has taken so many great artists and SLT helps support and nurture new budding talent in our town. I'd like to think that Betty, Carrie, and Bowie would be happy with any proceeds going to that cause, which I assure you it WILL!

The campaign has thus far raised over its original goal so it's likely Betty will make it to 2017.

Citations: BETTY WHITE IN CASE 2016 WANTS YOU NEXT Heres Cash for Protection (TMZ)