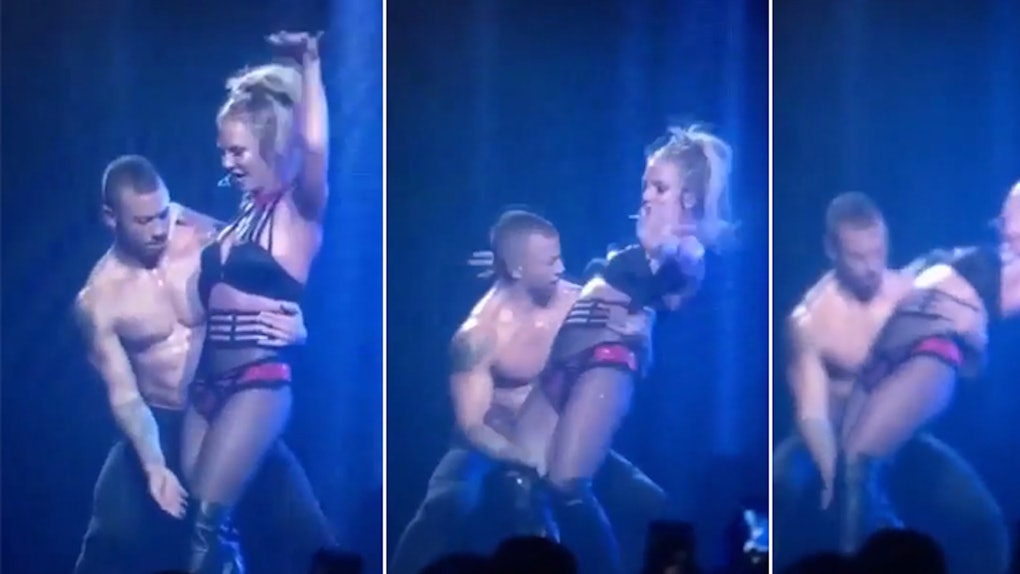 Britney Spears almost pulled a Bella Hadid by totally wiping out in front of everyone.

At the 2016 Apple Music Festival on Tuesday, the Queen of Pop performed on stage in London at The Roundhouse.

During her set, Britney was supposed to get flipped backwards by one of her sexy, shirtless dancers. He had his arms open and was ready to go, but when Britney leaned back, she freaked out and was like "HELLLLL fucking no."

A fan in the audience captured the exact moment she almost fell, and even turned it into a meme.

Man, that was a close one.

Me when I make plans with people then the times comes and I'm just like 'yeah no.'

Ugh, story of my life. Britney, you get me.

So let's talk about this fall, shall we?

Perhaps shirtless man approached her from the wrong angle or maybe she just ate a big lunch and wasn't feeling it. Either way, things definitely could have turned ugly.

Britney Spears, being the goddess that she is, totally recovered and got right back into the routine. What a superstar. GO BRITNEY, GO!

Obviously, Britney's fans supported her no matter what. It looks like people were mostly just concerned for her safety.

Some people thought she was jet-lagged or really tired. Maybe the girl was just scared?!?!

In the end, it looks like people still loved the show...especially when Britney shook her butt and smacked everyone else's.

At least she didn't actually wipe out. Remember when Justin Bieber fell on stage and no one could stop making fun of him for months?

Oh, you don't? Here, let me refresh your memory.

LOLOL, poor kid. See Britney? It could have been worse. Keep your head up girl, shit happens.