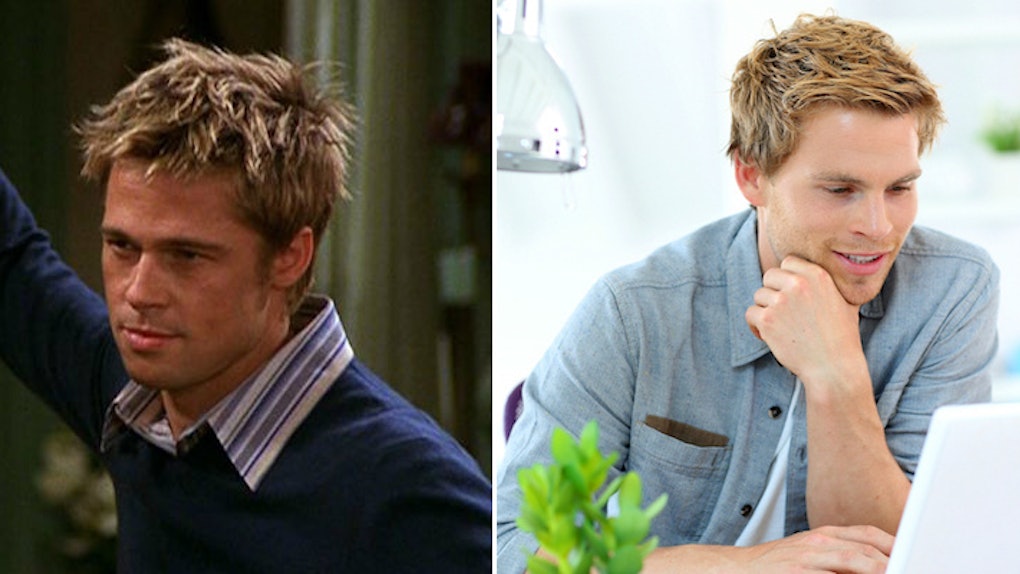 Look, obviously Angelina Jolie has a lot more on her mind besides dating right now.

First of all, she has to go through this whole divorce thing with Brad Pitt. This is a long process, people.  You don't just sign the papers and you're done. You have to, like, talk about legal things. I think.

Second, she has to go through the custody process since apparently Brad plans on fighting her for joint custody of their six children.

Third, she needs to stay indoors at all times to avoid the herds of paparazzi who are undoubtedly waiting right outside her door.

So yeah, not a TON of time for dating.

But let's just pretend she does have time to date, and let's also pretend she actually wants to date, rather than take some time to process the loss of a 12-year relationship.

In that case, she should definitely date someone who at least looks like Brad Pitt. Not because she's not over him or anything. Just to make him real mad, ya know?

1. The ghost of Hermann Rorschach

Hermann Rorschach is a Swiss psychologist who is known for inventing that inkblot test and also for looking freakin' identical Brad Pitt. I mean, right??

He died in 1922 at the age of 37. I don't know the logistics of Angelina dating a ghost, but I trust her to figure it out.

2. Robert Redford in the 1979 film "The Electric Horseman"

I want to be clear I am not saying Angelina Jolie should date 80-year-old Robert Redford.

I am saying Angelina Jolie should date Robert Redford's character, Norman "Sonny" Steele, specifically the scene where he wears the purple, light-up cowboy outfit. I think Angelina would really like that.

Listen, if Brad really was as horrible to the kids as Angelina says he was, then there's only one move for her to make: Date the dude's brother. Works every time.*

And if you didn't know Brad Pitt had a brother, check him the heck out.

4. The new intern at my friend's office

At brunch on Saturday, my friend showed us a picture of the new intern in her office, and we all agreed he kind of looks like a young Brad Pitt.

He's not a very good worker, apparently, but if Angelina dated him he'd never have to work again!

5. The old (young) version of Brad in "The Curious Case of Benjamin Button"

It's totally fine and not at all a felony because he has the mind of an 80-year-old, OK!!! Plus that movie came out so long ago! IT'S FINE!

OK, fine, he looks nothing like Brad Pitt, but please, Angelina, this is the only thing that can save our family at this point.

*This actually works zero percent of the time and would most definitely backfire.