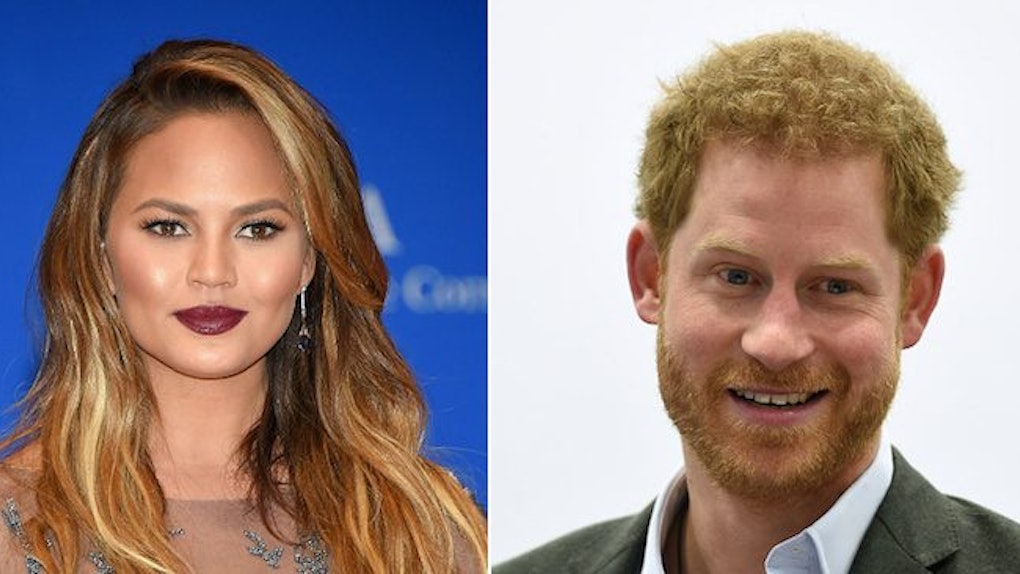 About one in five adults are effected by mental illness in the United States every  year, according to the National Alliance on Mental Illness (NAMI). That's 43.8 million people.

And one in 25 people have a mental illness that interferes with an activity in their daily life, which is about 9.8 million people.

Some of your favorite celebrities are among those numbers, working toward bettering their mental health, just like the rest of us.

Here are a few celebrities who have opened up their platforms to create awareness, de-stigmatize mental illnesses and encourage others who are struggling.

Prince Harry revealed during an episode of The Telegraph's podcast, "Mad World," that losing his mother took a toll on him that he didn't deal with until 20 years after her death. He struggled with aggression, grief and anxiety at public appearances.

The prince took up boxing and therapy as a part of his healing process. He says of his counseling visits,

The experience I have had is that once you start talking about it, you realize that actually you're part of quite a big club.

I've now been able to take my work seriously, and take my private life seriously, as well, and be able to put blood, sweat and tears into the things that really make a difference. Invictus would have never gotten off the ground if I hadn't dealt with all that stuff beforehand.

The actress and singer wrote about dealing with depression and anxiety in her book, "I Don't Belong To You: Quiet The Noise & Find Your Voice." She wrote about how therapy and self-care rituals like meditating helped her to reach a healthier place.

In the PSA video, she says,

We all have our trials and errors with different things in our lives. Everything is not the end of the world. I realized, as I got older, I would love to have told myself that. Give yourself some time. Be patient with yourself and you'll learn how to cope with these different things. As long as you're able to acknowledge them, as long as you're able to consciously be aware of them, you can move past them.

The pop icon takes breaks from music just to reconnect with the world. She often spends the time moshing at Jay Z concerts, sliding down the Great Wall of China or hitting up museums.

During an interview with The Sun, she revealed that she takes time off because her career takes such a toll on her mind.

I couldn't even tell which day or which city I was at. I would sit there at ceremonies and they would give me an award and I was just thinking about the next performance. My mother was very persistent and she kept saying that I had to take care of my mental health.

She also told Elle magazine in a 2016 interview,

We have to care about our bodies and what we put in them. Women have to take the time to focus on our mental health —take time for self, for the spiritual, without feeling guilty or selfish.

The "Sorry" singer revealed in an NME interview that he gets depressed "all the time."

I feel isolated. You're in your hotel room and there are fans all around, paparazzi following you everywhere, and it gets intense. When you can't go anywhere or do anything alone, you get depressed. I just want people to know I'm human. I'm struggling just to get through the days. I think a lot of people are.

Chrissy Teigen penned an open letter in Glamour magazine about her battle with postpartum depression.

I had everything I needed to be happy. And yet, for much of the last year, I felt unhappy. Getting out of bed to get to set on time was painful. My lower back throbbed; my ­shoulders — even my wrists — hurt. I didn't have an appetite.

To heal, she took antidepressants and also discussed her plans to see a therapist at the time of publication.

The "Girls" actress, who battles OCD and anxiety,  joined a new campaign with the Child Mind Institute, a nonprofit that works with children struggling with mental health and learning disorders.

In a PSA, released exclusively with People, Dunham shared,

I would tell my younger self that there's no shame in asking a teacher for help, telling a friend that you're uncomfortable and that it's just the same as falling down and scraping your knee. I would tell my younger self to squeeze my dog tightly and to read a book and to meditate and breathe. And to understand that I'm not alone that there are so many other kids like me who are suffering this way and the greatest thing I can do for them and myself is to be honest.

Selena Gomez has talked about how her battle with lupus also took a toll on her mental health. She wrote in a statement to People,

I've discovered that anxiety, panic attacks and depression can be side effects of lupus, which can present their own challenges.

The actress took time off from career obligations and also spent time in a Tennessee rehabilitation facility.

During an acceptance speech at the 2016 AMA Awards, she gave others  who struggle to maintain their mental health a few moving words of encouragement:

The former Disney star turned pop singer discovered that she has bipolar disorder and discussed her experience in detail during a documentary she executive produced called, "Be Vocal: Speak Up for Mental Health."

She said during the doc,

Something that I'm hoping to change by making this documentary is creating conversation and hopefully spreading the awareness of mental health, and that it is just as important as physical health.

Lovato also shared a practical and empowering message about self-care on Instagram.

The former One Directioner and Gigi Hadid's (gorgeous) pop star bae penned an open letter via Instagram to his fans about how his anxiety has affected his stage performances.

In an open letter to Time magazine, he explained his battle even further. He wrote,

Anxiety is nothing to be ashamed of; it affects millions of people every day... When I was in One Direction, my anxiety issues were huge but, within the safety net of the band, they were at least manageable. As a solo performer, I felt much more exposed, and the psychological stress of performing had just gotten to be too much for me to handle—at that moment, at least. Rather than hiding away, sugar-coating it, I knew I had to put it all out there.

The Oscar-winning actress released her memoir, "This Is Just My Face: Try Not to Stare," on May 1 and in it, she opened up about her battle with bulimia, panic attacks, depression and suicidal thoughts.

I found a doctor and told her everything that was wrong with me. I'd never run down the entire list before, but as I heard myself, I could sense that dealing with this on my own was definitely no longer an option. The doctor asked me if I wanted to kill myself. I said, 'Meh, not yet. But when I do, I know how I'll do it.' I wasn't afraid to die, and if there was a button I could've pushed to erase my existence from earth, I would have pushed it because it would have been easier and less messy than offing myself. According to the doctor, that was enough.

Anti-depressants and therapy have helped Sidibe as she continues to strengthen her mental health.

Washington has already made it very clear that she doesn't want Olivia Pope to go to therapy. She said during a Buzzfeed Facebook chat,

The problem is if Olivia got a really good shrink, the show would be far less interesting… It just wouldn't be as much fun. The crazy is so much fun. Everybody is crazy on our show. Keep all of our characters away from shrinks — then "Scandal" will be good!

But that doesn't mean she doesn't think therapy is a great method of self-care for herself.

During a chat with Michelle Obama and Sarah Jessica Parker for the Glamour 2015 Cover story, she talked about why she openly discusses seeing a therapist.

I say that publicly because I think it's really important to take the stigma away from mental health.... My brain and my heart are really important to me. I don't know why I wouldn't seek help to have those things be as healthy as my teeth. I go to the dentist. So why wouldn't I go to a shrink?

In 2016, the "Prison Break" actor detailed his experience with depression in a post that called out body shamers who created a meme poking fun at his weight gain. He wrote in a Facebook post,

I've struggled with depression since childhood. It's a battle that's cost me time, opportunities, relationships, and a thousand sleepless nights.

In 2010, at the lowest point in my adult life, I was looking everywhere for relief/comfort/distraction. And I turned to food. It could have been anything. Drugs. Alcohol. Sex. But eating became the one thing I could look forward to.

As someone who knows what it's like to struggle with depression, I want to help give voice to the many people living with mental health issues. I want to help assure them that they're not alone ... letting people know that it's okay to ask for help is extremely important.

America's favorite quirky supermodel took to Twitter to talk to her fans about why she took a break.

This is how she dealt with such a tough period:

In a 2016 interview with Esquire, she detailed her mental health experience even more, with sad tales of anorexia, self-mutilation, cigarette abuse and writing emotional abusive notes about herself.

Depression is an ongoing battle for her but she finds joy in acting, getting silly on the set of photo shoots and spending time with her girlfriend.

Bellasario has had just an much of a time with her mental health as her character, Spencer Hastings, on the "Pretty Little Liars" show. She revealed in Seventeen magazine:

I started self-harming when I was a junior. I would withhold food or withhold going out with my friends, based on how well I did that day in school... I didn't know what was right and what was wrong, so I think I created this bizarre system of checks and balances to create order in my world. But it really backfired.

Bellasario also discussed feeling out of place amongst her PLL co-stars but has balanced it out by making sure she stays true to herself when she's not busy being "Spencer."

The minute I'm off that stage, I try to get as 'me' as possible. I do that by piling on my black eyeliner, and I put on my ripped tights.