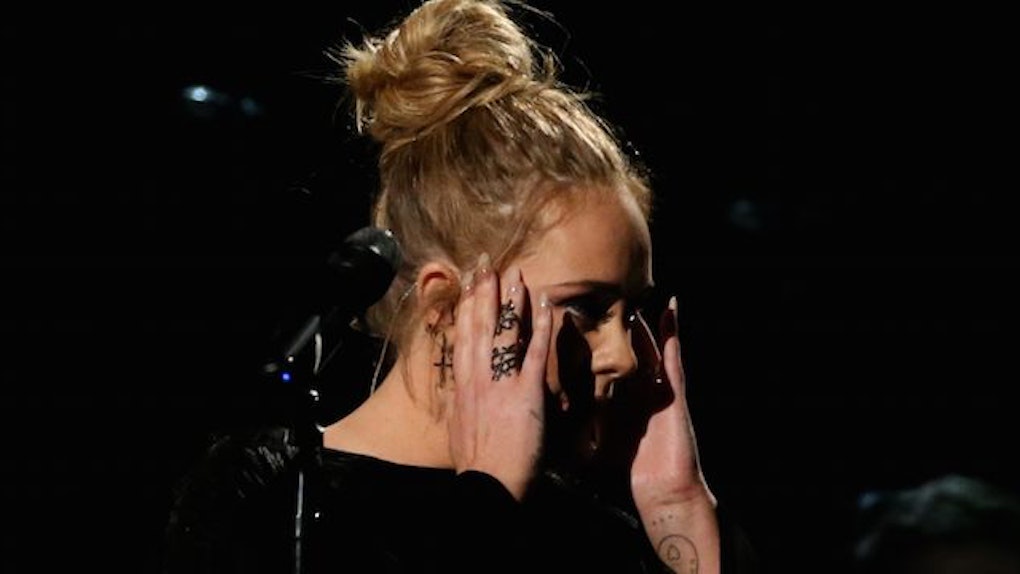 You want inspiration? BOOM. Adele has got your back.

We all know there are few people alive in 2017 who have a voice comparable to Adele's.

It's like the audio equivalent of heavy cream or hearing your child laugh for the first time. So when technical difficulties happen, ruining her FLAWLESS pipes, it's nothing short of being a crime against humanity.

Thankfully, we all narrowly avoided one of those crimes at this year's Grammy Awards, when 40 seconds into a tribute for George Michael, Adele stopped her performance and asked for a do-over.

You can see the moment here.

Adele explained why she needed to start the song over, saying,

I know it's live TV. [Bleeped out] I can't do it again like last year. I'm sorry for swearing and I'm sorry for starting again. Can we please start it again? I can't mess this up for him.

You can watch the full performance here.

The crowd at the Grammys was totally cool with Adele starting over, by the way -- not that I think anyone would have taken THIS moment to be like, "RULES ARE RULES, ADELE! SORRY, BUT THAT'S THE BIZZ!"

The internet was also quick to jump to Adele's defense.

Not that any of this mattered, because a few minutes later, "Hello" won the award for Song of the Year, beating out Beyoncé.

Unfortunately, this isn't the first time Adele has had issues with a Grammys performance.

Last year's Grammys were an all-time low point for humanity when this crap happened.

Adele recovered from the audio problems and ended up killing the rest of the song, but it clearly put a bit of a wet blanket on the show.

She wasn't going to let that happen to her performance tonight, though, especially given the fact she was tasked with honoring George Michael.

So next time you screw up, harness your inner Adele and tell everyone around you, "I'M DOING IT AGAIN."