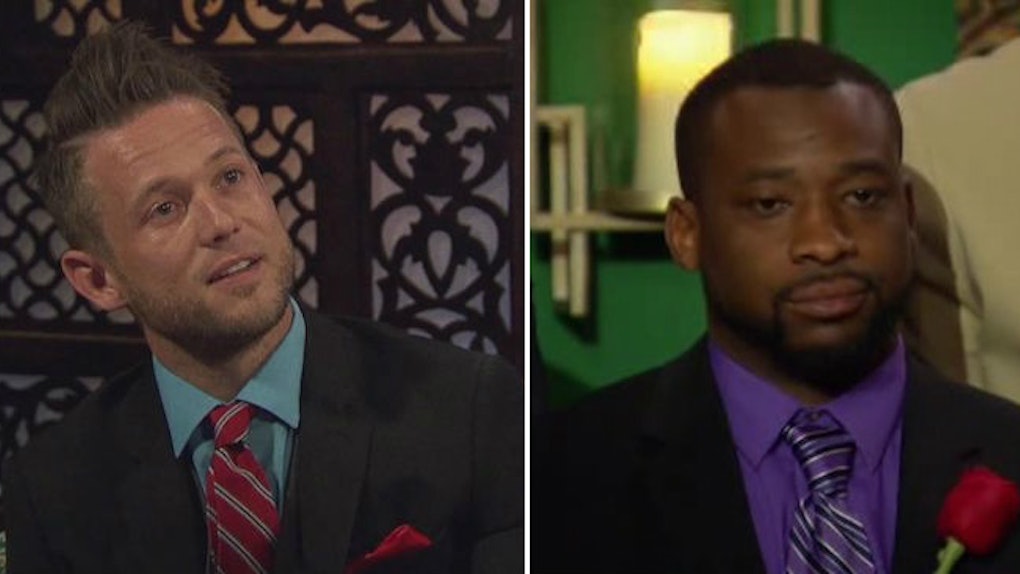 We've almost made it through yet another season of The Bachelorette, and Bachelor Nation is on the edge of their seats to find out whether Rachel Lindsay will pick Eric, Peter, or Bryan as her husband-to-be. (Yes, there is a final three instead of a final two, because this is the weirdest season ever.) But before we can get to that reveal, first we have to get through one last Lee and Kenny fight on Bachelorette: Men Tell All.

Much like the middle episodes of The Bachelorette, the Lee vs. Kenny debate took up the majority of Men Tell All. Basically, everyone just wanted Lee to admit he was being a racist jerk, which Lee refused to do. Those controversial tweets were even shown on the big screen, and Lee apologized, but maintained that he is not racist, even though he acknowledged that a tweet was racist before denouncing it. For his part, Kenny did say that he didn't think Lee was racist — just a bully.

"It didn't feel like racism," said Kenny. "There was never one point where it was like, 'Oh his racist ass.'" Kenny just felt Lee was picking on him because he felt insecure of his place on the show.

Other men chimed in — Dean definitely felt Lee was treating Kenny unfairly, and Adam added that he never saw Kenny being physically violent toward Lee. DeMario gave his two cents, that he thought Lee was a very genuine, nice guy before he left, and Will agreed.

Kenny took a seat in the hot seat, and pulled out an impressively accurate Lee impression.

"I am a father, and I have to be responsible for the things that I say," Kenny explained, saying that there was nothing Lee could have done to bring out his "aggressive side." The guys backed this up, saying they never thought he was anything other than frustrated.

Lee then jumped in, and cleared one thing: Kenny never pulled him out of a van. He admitted Kenny took the high road, he admitted he was a bad friend, and he apologized to Kenny. Well, what do you know? It looks like Lee actually learned his lesson.

Then Chris Harrison brought out Kenny's daughter Mackenzie, Kenny cried a little bit, and Chris Harrison got them tickets to Disney. So all in all, a happy ending.

Next it was Lee's turn in the hot seat.

"I make jokes when I'm uncomfortable, and at inappropriate times," Lee admits. "I should have been a better friend."

Lee stated he had some "things" to work on, and the other men started pushing Lee to be specific about what "things" he meant. (Someone in the seats coughed "racism.") Dean then took the opportunity to tear into Lee for never owning up to his mistakes, hinting at those racist tweets.

If you'll recall, Lee and Kenny had something of a strained relationship during this season Bachelorette season. Basically, Lee started picking on Kenny around Week 4. It started when Lee interrupted Kenny during his one-on-one time with Rachel. Then when Kenny confronted him, Lee was being incredibly rude, and then lied to Rachel about how "aggressive" Kenny was.

This pattern of Lee provoking Kenny and then trying to play the victim kept repeating. It didn't help that Lee has a history of racist tweets, in which he called the Black Lives Matter movement a terrorist organization, declared his hate for Islam, and compared the NAACP to the Ku Klux Klan. This, combined with his perpetuation of the harmful stereotype that black men are "aggressive," had fans livid with Lee.

The two men went on a drama-filled two-on-one date in Week 5, and after an annoying cliffhanger, Rachel finally, finally sent Lee home. Unfortunately for Kenny, he was unlimited later on in that very same episode, because he just seemed to miss his daughter too much.

But things turned around for Kenny and Lee before the end of Men Tell All. After Lee denounced his tweets and acknowledged that they were racist, many of the other contestants accepted his words and told him they would help to educate him on racial issues — including Kenny. Then, Kenny and Lee shared a hug, and it actually seemed sincere. Who would've thought that a Bachelorette feud could not only be overcome, but turn into a real, insightful conversation on racism?